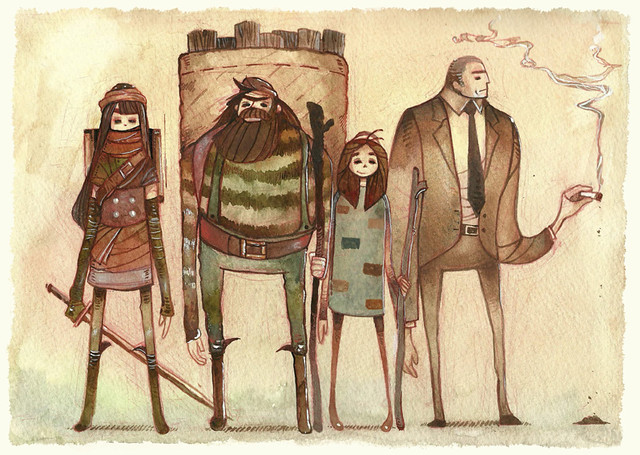 Pinpointing some actual content for races in Oubliette. These are the basic races; stranger dead-ends like Homunculi, Deodands & Cagogen are left aside for now. The rules here are only in beta-testing; the current campaign uses different Willpower mechanics for Alphas, & I'm still not sure about their math. Theoretically trading five skill points for three tribute points is balanced, but derived attributes make it murky. I reason that the untrained skill penalties balance it out, but I'm willing to admit I might be wrong. I also waffle on the "derangement in place of a Vice." I'm just not sure, & it is something I kick around now & again. Sometimes I think of moving the derangement mechanics over to Demi, since I like Derro so much & I figure "obsession: gold" would be a cute Dwarf-esque flaw, but I also like the idea of making "Small" their defining mechanism. I have considered leaving them as Size: 5 & just having the "Small" willpower mechanic, for that matter. Still, this ought to give a taste of where I'm at, currently, with the species of Oubliette.

Humans: Humans dominate the Urth, & are the default species of Oubliette. They combine the best traits of adaptability & a tendency towards complex social systems & specialization, balancing abstract thought with concrete problem solving. Their height ranges from 1.5 meters to 1.8 meters & 55 to 85 kilograms, depending on diet & heredity, with a moderate degree of dismorphism, as males tend to be larger. Humans are omnivorous, & sleep an average of seven to nine hours a day. Colouring ranges from pale pink to dark brown, predominately influenced by latitude, though widely distorted by migration patterns. Humans excel at outlasting the competition; they can walk swiftly for hours without rest & can survive extraordinary circumstances. They also display a psychological sturdiness that affords them a surprising resilience to the horrors of war & the supernatural. They share emotional bonds with their peer groups, able to forge strong attachments to relatives & non-relatives alike. Human life expectancy varies wildly by population, but the average maximum life span is approximately 80. Humans tend to organize themselves by family, & because of this tendency towards familial bonds, humans sometimes define by ethnic characteristics-- shared traits in appearance. They are capable of shifting this allegiance to cultural structures, however, & often do. The cultural diversity of Humans is one of their hallmarks-- varying ideological systems are adopted & discarded by generation & geography. In our world we would call Humans Homo sapiens, & most genre fiction includes them as the default. When using the World of Darkness Storyteller system, humans receive 5/4/3 to prioritize & distribute among their attributes & 11/7/4 to spread amongst their skill groups. They gain Willpower as described in the World of Darkness book.

Karnaks: Karnaks are the also-rans of Urth, a distant second to Humans in their dominance of the world, though legends & some evidence supports that the situation may have been reversed at other points in history. Karnaks are more generalist than Humans, with self-sufficiency prized among individuals, & their social structures tend to have very flexible hierarchies. The average Karnak is stronger & smarter than the average Human-- but an exceptional Human tends to be more exceptional than his Karnak counterpart. Karnaks are very robust in build; with heights ranging from 1.6 meters to 1.8 meters & weights from 70 to 100 kilograms. Strong, barrel chested, & bow-legged, they display less variation than Humans both between populations & between males & females. Karnaks are omnivores, but strongly tend towards a carnivorous diet, & they sleep from five to six hours a night. Karnaks range in colouration, in much the same range as humans do, but they tend to excel in tropical & arctic conditions, making extremes in pigmentation more common. Karnak maximum lifespan is slightly shorter than Human, but their childhood & adolescent periods are also shorter, giving Humans & Karnaks around the same number of years of maturity. Karnak social flexibility tends to make abstract relationships the norm, with egalitarian tribal patterns & complex meritocracies being the norm. In our world we would call Karnaks Homo neanderthalis, & they are often the "threatening outsider" in fiction-- the Orcs, the Klingons, or the Cimmerian. When using the World of Darkness Storyteller system, Karnaks have a balanced 4/4/4 to distribute in their attribute categories & 10/7/5 to apportion to their skills. They receive all their Willpower back at the end of a story if they have fulfilled their Vice, & gain one point in a scene if they act out their virtue.

Demi: The small Demi perpetually lurk in the margins of Urth, creating communities in places that often go undiscovered by other races. Their diminutive size is their most notable feature, & it informs everything about them-- they are a species in the shadows, hidden, always creeping. They also tend to live side by side with other species-- Humans may have domesticated the dog, but Demi have stranger pets by far. Demi have a facility with repetition & memory, so while they may not be as strong or possess the raw intelligence of their larger cousins, they often possess a dazzling array of skills & abilities. Demi can be as small as 1 meter & are rarely larger than 1.3 meters, weighing in at 25 to 35 kilograms. Males are slightly larger than females. Their long arms & strange high-stepping gait is distinctive, & their diet is incredibly omnivorous-- Demi can digest almost any organic material. Demi average six to night hours of sleep in a twenty-four hour period. Their colouration & features are even more extreme then those found among humans, because Demi often live in isolated communities where features have a chance to evolve to exaggerated levels. The maximum lifespan of a Demi is approximately 100 years. Their small size allows them to thrive in places where larger races would starve; underground, in swamps, deserts, mountain tops. Because of the puzzle-loving brains & eidetic memories of the Demi, traditions & rituals often come to be held in the forefront of a community. In our world we would call them Homo floresiensis, & they are the Little People of myth & fiction-- Dwarves, Gnomes, Halflings, Jawas. When using the World of Darkness Storyteller system, Demi are given 4/3/3 to divide among their attributes & 13/9/6 to distribute to their skills. They are Size: 4, & receive an extra Willpower point whenever their Small size is germane to the story, in addition to the usual rules.

Alphas: Are Alphas an antediluvian remnant of what the world was like before some primordial Fall, the oldest species extant, or are they the youngest, the relics of an advanced empire that bred a super-human race? They posses tremendous natural gifts, but their extended childhoods frequently leave individuals thrust into adulthood with few practical skills. Alphas are enormous, falling in a range from 1.9 meters to 2.3 meters, with frequent outliers on the upper range, with weights from 70 kilograms to 130 kilograms. Alphas have extraordinarily expressive faces; with more muscles & attachment points, they can show a range of emotion that borders on the uncanny. They are the most alien of the species. Alpha colouration is very strange; the usual shades of pale to dark dominate, but often with a secondary tint, as Alphas process chemicals & minerals in odd ways, & in some cases possess green plant-like pigments. They sleep for eight to ten hours a night. Alphas rarely fall ill to the sicknesses that plague other species, they almost never put on excess weight, & their maximum lifespan is very long indeed. After a long period of adolescence-- 40 or 50 years-- an Alphas can easily expect 200 years of maturity, followed by another 50 years of senescence. With certain drug or alchemical treatment, this longevity can be expanded even further. These apparent advantages are the species' biggest hurdle; in less than optimal conditions, Alphas struggle to survive. With low birth rates, high caloric demands & long lives, Alphas teeter on extinction in survival conditions. Alpha communities tend toward charismatic leadership or plutocracy, a teeter totter between their highly social nature & their need for steady resources. In our world we would call them Homo superior, & they are the Elves of fantasy fiction, the futuristic humanoids of The Culture & the dying races of Adam Strange's Rann. When using the World of Darkness Storyteller system, Alphas have 6/5/4 to spread among their attributes & 9/5/3 to divvy up between their skills. Their strange psychology is reflected in a minor derangement in place of a Vice that gives the Alpha an extra Willpower point whenever they indulge in it.