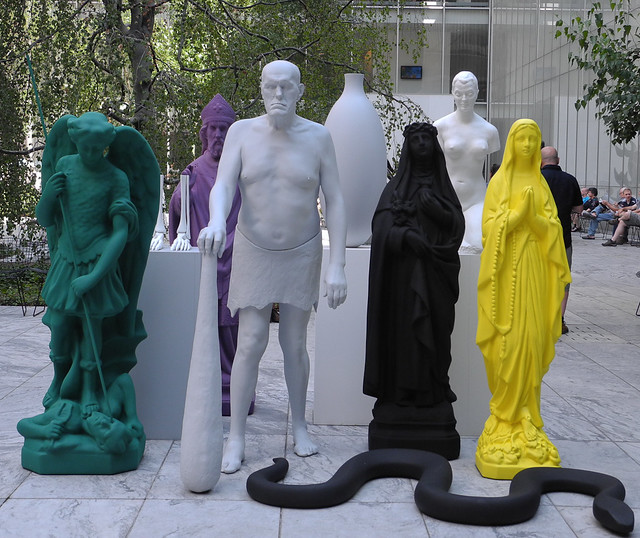 The whirlwind friendship between me & Terra continues at a breakneck pace, interrupted only by the occasional assurance that we aren't being creepy. Nope, we're awesome. Thursday night we went to Old Town with Vicki & Brian & Jocelyn for Abigail's going-away party. It is an appalling heat-death outside, the sun a hateful ray gun of evil, & just walking the few blocks it took to get there was miserable. Terra & Vicki left early & then Brian & Jocelyn & I left not too long after; they went to Queens & I went to Brooklyn. Just sort of Summer of Sam dog days; walking from the train to my apartment-- all of two blocks-- I managed to fall into a rage at my cellphone for not getting reception. A rage, brain boiling with frustration. I knew it was born from the weather, & then it was subsequently assuaged by the air conditioning of my apartment. Jenny & I hung out & drank a beer while watching Leverage. A goofy episode where the actors who play Hardison & Parker played a young Danny Glover & his inter-racial paramore. I thought it was a lot of fun. With Human Target canceled, Leverage is my "Eighties action camp" fix. Then half-day Friday, after a bit of Work Adventures, Terra & I met up & headed to the Museum of Modern Art. Again, I would be remiss if I didn't mention the temperature-- our company's CEO sent out a memo to everyone saying we should wear shorts & flip-flops to work-- but we made it there with only the bare minimum amount of grousing & complaining. 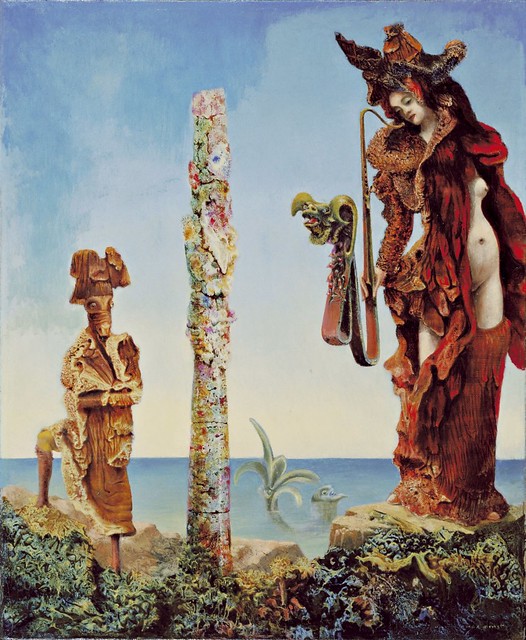 (Max Ernst - "Napolean in the Wilderness," at the Museum of Modern Art.)

The exhibit hall on the top floor was showing a bunch of works by Francis Alÿs, which were not my cup of tea. There were a few cute bits-- a magnetic robot that collects debris from the street, videos of the artist following tornadoes & the best of it was "Song for Lupita," because of the disorienting effect of the projection rig-- but over-all I thought the whole thing could be summarized as "yeah, I know somebody who lives in Williamsburg, too." Then it was down to the paintings & sculpture. I think Terra & I have similar taste, or enough overlap that when we'd say something it would be followed but "yeah, that is what I thought, too." We'd joked about looking for signs of The Doctor at the museum-- me forgetting that she hasn't seen "Vincent & the Doctor" yet-- but we totally saw a painting that, from a distance, looked like the TARDIS, & then later in the architecture area there was totally a little miniature version of the Tenth Doctor & Rose. 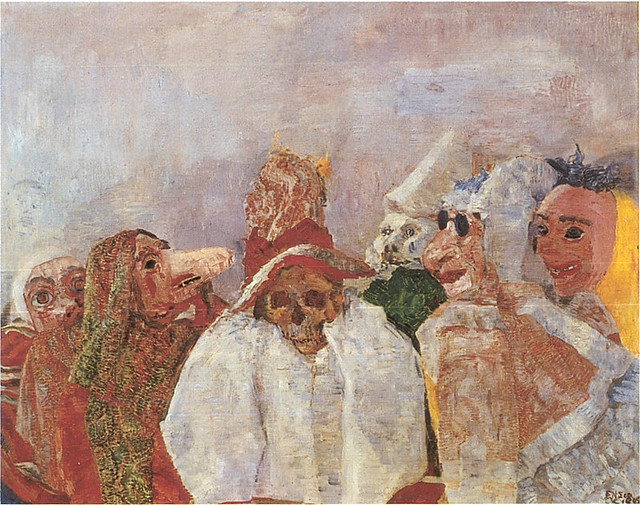 So we wandered around for a bit. Sang a snippet of "Meet James Ensor" by They Might Be Giants, when appropriate. There were more than a few bits where our repartee became almost too precious-- like when I mistook a giant fan made out of latex for a giant phone made out of latex. I didn't know what the front was! But that is a shame, a scarlet letter for me to wear. Terra got her own albatross to wear when it took her too, too long to figure out that the "Grand Openings Return of the Blogs" people were using the balloons to draw, in their performance art piece. Each to his own, Colwyn. There were a few pieces that I really liked, but wouldn't have noticed if they weren't displayed as an installation-- Monet's "Lilies" is no surprise, because I think reproductions always fail to do Monet justice, & Hanne Darboven's "Untitled (Ein Jahr)" is another, made up of lots of different repetitive elements. 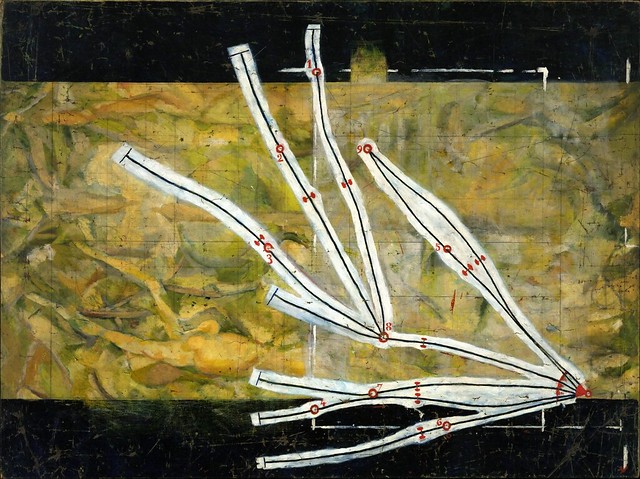 (Marcel Duchamp - "Network of Stoppages," at the Museum of Modern Art.)

Speaking of repetition, every time we saw something in the vein of Neo-Gothic Noir sculpture-- a taxidermy parrot on a broken doll, that kind of thing-- I'd point & say "if you like this, you'll like Sleep No More, to the point where it became a running gag. Speaking of repetition, I also got a kick out of On Kawara's "One Million Years (Past)", which is a sequence of printed years. A million of them. As I told Terra, I was especially tickled because it left open the possibility of a "One Million Years (Future)" piece. She wondered what "One Million Years (Present)" would look like, & I figured it would be "2011 Earth-1, 2011 Earth-2, 2011 Earth-3, etc." When I saw a Robert Rauschenberg piece, I was reminded that hey, Rauschenberg exists. He's a guy I like but I only think of when I'm at an art museum. When we saw Francis Bacon's "Study of a Baboon", I told Terra about the long running argument Jenny & I have about who turned who onto Francis Bacon. She claims she introduced me to Bacon, & I say she's wrong-- searching for pictures of Pope Innocent on the internet turned me on to Francis Bacon. 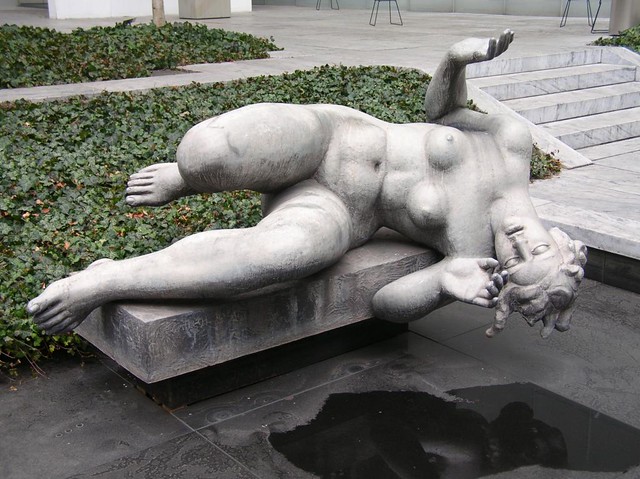 (Aristide Maillol - "The River," at the Museum of Modern Art's sculpture garden, photo by Stephen Rees.)

We went out into the sculpture garden, braving the heat, in the middle of everything. The logic being that we'd soaked up the air conditioning, & then we could return to the air conditioning & still have museum left to go through. I had an ice cream sandwich & an iced coffee, Terra had a mango gelato, & we settled in. We figured that since we couldn't see any cute people, that must mean we were the cute ones. Probably true. Science. Katharina Fristsch's "Figurengruppe" (above) was probably my favorite piece from the whole museum, even missing the purple fellow. There was a "Wishing Tree" by Yoko Ono there, where you were supposed to tie a tag with your wish on-- mine bore the lone word "Ragnarok", because that is just how I do. Terra remarked on a woman's tattoo & I hadn't noticed; Terra said it was because I was too busy checking out the lady's short hair cut & I had to admit that was one hundred percent accurate & truthful. I totally had been. Then I talked about how radical Storm King is, Terra finished her ice cream, & we went back inside. 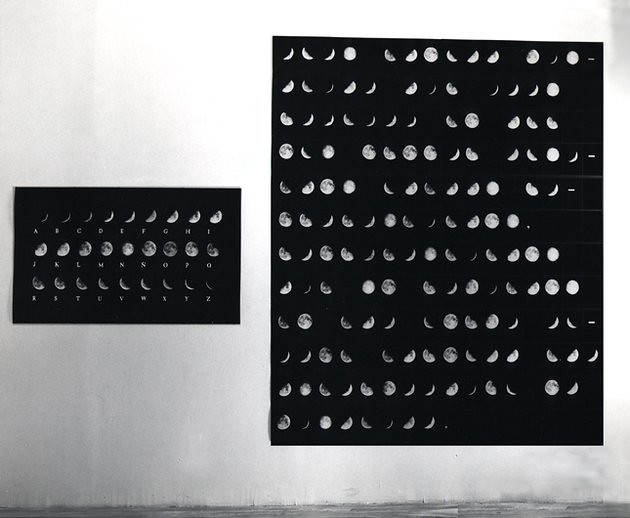 Back inside & down into the contemporary art. Listen, I like a lot of contemporary art, & I think I've got a really high threshold for preciousness, pretentiousness & post-modernity. That said, I just don't agree with MoMA's curators very much. I compared Alÿs to any one of a zillion people in Williamsburg, & I feel much the same about Cy Twombly, only Twombly is more any one of a zillion people in SoHo. Great, you painted a wicker chair white. Good on you. There was also the film piece "The Death of Tom" by Glenn Ligon, which is...a blurry print of the end of 1903's Uncle Tom’s Cabin. It was just developed wrong on accident & the artist felt it was a commentary on his early work. Yawn. I was similarly unimpressed by the huge exhibit of Harun Farocki's "Images of War (at a Distance)." The best piece to illustrate why I was utterly bored by it was just a side by side clip of pat downs of convicts in a United States prison & a pat down of travelers on an airline. Yes, I get it, very "deep." Basically a High School student's final film project. Oh, & Hannah Wilke's obsession with genitals seems pretty sophomoric, but the MoMA sure seems to love her stuff; it is everywhere. The design & architecture section was pretty great, though.

When Terra & I were finished at the Museum of Modern Art, we headed over to Jenny's library, since we were in that neck of the woods anyhow. Maybe it was the heat, maybe it was the weird hole in the world that the Helmsley Building is-- seriously, right in the middle of the street? Totally a Fringe-esque incursion from another universe, right?-- but is was a pretty goofy walk over there. Hideous marionettes & lumbering golems for the win. We only hung out for a bit-- Terra had a train to catch for her Ultimate Slumber Party & the library was closing, so she split & I hung around reading the (absolutely awesome) Supergods until Jenny was ready to leave, & we took off. I wanted to go do some kind of a date thing but it was a hundred & three degrees Fahrenheit & humid as hell, & there was no way we were going to go out of our way. Jenny & I still came up with a good time-- when we got back to Brooklyn we decided to go to Peppino's & get some...wood-oven baked pizza? Why we decided the best idea to beat the heat was to go to a place with a giant indoor over I will never know, but it was nice. We split a bottle of wine, some antipasto, a pizza & a cheese steak. More than I could even begin to eat, actually, so there were leftovers for breakfast. After that we came home & watched Red Riding Hood. So, here is the thing: I thought Catherine Hardwicke did an awesome job with Twilight. She was tongue in cheek but respectful of the source material, which is a fine line to walk. Red Riding Hood is pretty blatantly an attempt to cash in on Twilight, but without a pop cultural touchstone to capitalize on. Instead you get a fairytale, but is both better & worse. Worse, because...I'm sorry, the "what big eyes you have" exchange really was irredeemably awful. Better because...well, you've got plenty of room to play around. In the end analysis, the movie was..."fine." It wasn't good, by any means, but it wasn't so awful. Amanda Seyfried is pretty great; I mean, she's everyone's favorite wide-eyed giant-eyed ingenue for a reason. Gary Oldman gets to chew up scenery. What else do you want? One nice bit-- Gary Oldman's soldiers are multi-racial, which I liked. It was a plausible way to have people of colour in the film, & I appreciate that. I don't appreciate the fact that they stayed subordinate, even in the epilogue. That was a let down. Oh, the fundamental werewolf story! I actually think the skeleton of the story is really great. The mythology of the wolf, the psychological element of the enemy among you, the witch hunt brought on by the outsider...there is great stuff there. I think as a werewolf story, it succeeds, but it ultimately falls short on any promise of being a good film.
Collapse