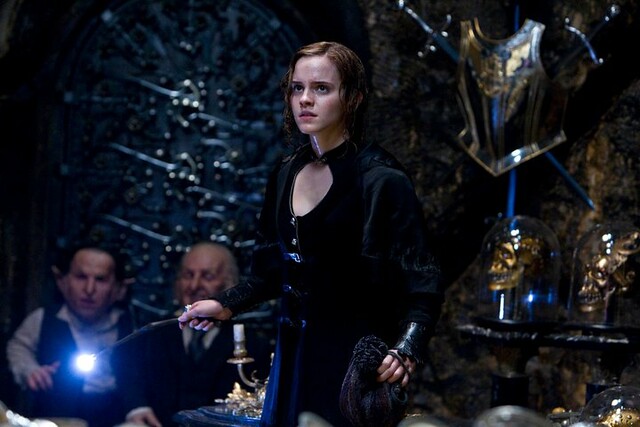 Jenny met me at the Flatline & we went over to Rye House for dinner. It hadn't occured to me for a long time that the key part of "Rye House" was the Rye, but I'm hip to it now. We shared a tumbler of neat Templeton Rye which is a small-batch Prohibition recipe; Jenny said it was the easiest to drink of any of the whiskies she's had. I liked it a lot, but it just impressed on me how unready for subtlty I am. Give me Scotch, give me Laphroaig, hit me like a hammer of smoke & peat, that is the way I like it. While I ate the bangers & mash I'd ordered for supper, we shared a pair of beers-- I had the Weyerbacher Sixteen, a dark braggot with bite & honey while Jenny had the Hair of the Dog Adam, a historical recreation that was also just as black as night. Lovely stuff, & just enough to whet our palates for the main course: Harry Potter & The Deathly Hallows: Part Two. Sort of the opposite of ...Part One; while Part One had lots of long spaces of subtle character interaction, Part Two is much more action oriented-- not that it doesn't have its share of quiet spots, but those are largely in the service of Harry Potter alone. Jenny dared me to think of any lines Ron might have had, & I could only think of two-- but who cares about Ron, anyway? Hermione & Snape are the only ones worth a damn. Speaking of Snape, he doesn't get a lot of room in the film-- a monologue & some flashback-- but Alan Rickman was killing it up there. J.K. Rowling may have called Snape a "gift of a character," but Alan Rickman's performance is so good that it travels backward in time to retroactively make the character in the novel that much better. My problems with the movie were largely the problems I had with the book-- I thought Snape went out too easily, & still think he should have killed Nagini or at least destroyed a Horcrux, for instance.

I really think that J.K. Rowling made a misstep by not having more ambiguous morality in the books. "Lock those Slytherin in the dungeon! They must be evil, because they were mean to Harry Potter in the first book!" Ugh, what a missed opportunity! How about having Pansy Parkinson be like "hey, we may be sneaky, but we are loyal to Hogwarts; lets kill some Death Eaters!" No? Oh, & the spiders are all evil because spiders are icky, despite the long relationship between Aragog & Hagrid? Ugh. I get the Manichean thing in the first few books, but as the story matured, so should the portrayals of "good" & "evil." Really though, my least favorite thing about the movie was...the theater was really hot & I had to go to the bathroom. Aren't movie theaters supposed to blast the air conditioning? What gives? Really, though, my favorite thing about the movie was...Hermione Granger in Bellatrix Lestrange's clothes, or "Goth Hermione." When I played Lego Harry Potter I said that putting Hermione in a Slytherin uniform was my goal, but clearly I wasn't thinking big enough! Helena Bonham Carter pretending to be Hermione pretending to be Bellatrix is awesome, too, but yeah. I have a huge crush on Emma Watson. It started when she cut her hair, & I was like "uh, oh, creepy, I think that little girl is super hot," but then to my joy discovered that she was twenty-two! That isn't so creepy after all. Besides, who doesn't like seeing the evil version of their favorite character? It is like a Mirror Mirror episode, almost. Not only that, but they had been dumped on by a waterfall in that scene, so Hermione's hair was all slicked back & looked almost short, which is my exact jam. So yeah, yes. I really liked that.
Collapse