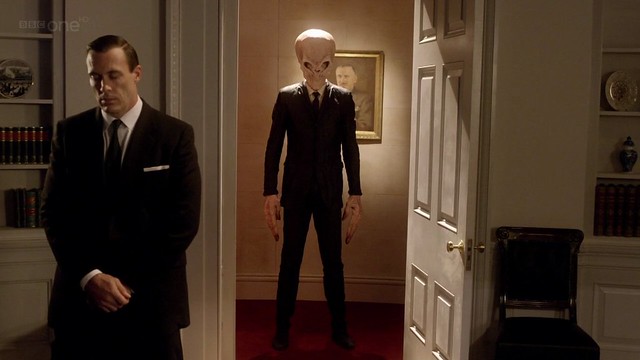 Yesterday Pamela & I got lunch at Blue Water Grill, since I was really craving oysters. It happened to be Restaurant Week, & I was tempted by the prix fixe menu, & so I only got two oysters. A shame; I should have stuck to my guns, because I thought their Restaurant Week menu was pretty weak. Pamela & I ordered very similarly-- the fried oysters salad with endive & arugula with a ginger peach chutney was pretty good, but you know-- bitter greens & fried foods. The main course of fried soft shell crab with ciabatta croutons on a bed of pickled cucumbers, asparagus & peppers was too, too pepper-y for my taste, & also...fried. I mean-- if the only things on your menu that stand out are fried, then that is a bad sign, I think. We shared the crème brûlée tart with peach sorbet & milk chocolate crunch bar with cherry ice cream & both were adequate but not enough to stand up & take notice. So yeah, I wish I'd gone with my gut-- pun intended-- & just gotten a mess of oysters. Regrets, I've had a few. Then home for Television Night!

elladorian showed up at the same time-- why hello Maggie, I haven't seen you since Monday! I had a bottle of Ozeki Nigori Unfiltered Sake to crack open, so we did & got busy watching Doctor Who. Brooklyn Pub was on the menu, cheese steak sandwich & a chicken & broccoli rabe wrap, but both came with French fries, so were were able to celebrate National French Fry Day. We started with the Eleventh Doctor Christmas special, "A Christmas Carol," which was very nice. Doctor Who has a tone that lets them do a blatent homage & come just short of winking at the camera, all without it falling flat. A tricky thing to pull off, but very clever. Then it was "The Impossible Astronaut," which is is some quality storytelling. I'm super anxious for the second half. Seriously, taking The Slender Man-- the ultimate cryptid trolling-- & making it...what, an X-Files horror homage? Nice work. Really nice. & a time travel mystery! Those are wonderful! & be advised: my Sarah Palin impression is not very good, but it was the best of everyone's...via forfeits & concessions.
Collapse