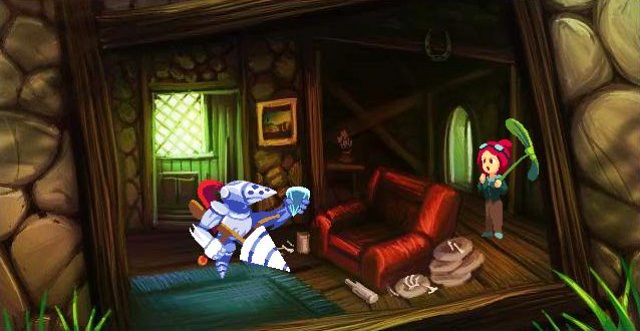 I liked House of Dead Ninjas enough that I tracked down the developer & played some more of their casual games-- ones with actual endings, which is nice, because they could be beaten. Managed. It didn't swell up to over-take my weekend. Well, not entirely, at least. Sunday was-- what the heck happened on Sunday? More "a whole lotta nuthin'" if I'm not mistaken. Little pointless "achievements," like the above mentioned Knight Fall series & gaining a level in GoldenEye. I was lazy & missed my window of availability to go to the gym, which was fine since I'd thrown down fairly hard the day before. In other words, Sunday during the day was a fairly laid back piece of pie, but come the evening we put on our Sunday Best (or well, not really we didn't) & walked over to Kira & Nino's apartment. We went a bit early so as to get a chance to hang out with Olivia before her bedtime, which continues to be a somewhat nebulous occasion. Her clock just hasn't settled-- & like me, she hates the heat. Kira took the opportunity to cook up Jenny a Birthday Feast! We started with a little wine-- when we went to Txikito before Sleep No More, Jason poured us a Basque wine that was a little bit effervescent, & recommended us another one...which is the one that Kira served us, 2010 Txakoli Xarmant! Basque. I guess it is the next big "thing." The appetizer Kira made was prosciutto with blueberries & wasabi microgreens. For the main course we opened up a bottle of Burgans Albarino 2010 for the white & 2010 Renacer Punto Final Clasico Malbec for the red, & got down to the main course! Okra shrimp & chorizo stew with a three day duck reduction & grey sole with lime. The side was Japanese sweet potato & pork belly & desert was a sea salt caramel chocolate blondie. Afterward, we watched True Blood. That show has disintegrated! I like it fine, still, but the problem is-- as they pull the camera out & start showing more of the world...well, the more the seams of implausibility begin to show. "True Blood is a show where vampires exist & have recently gone public" is a solid premise, especially when it focuses on inter-relationships, but "True Blood is a show about public vampires, secret werewolves, hillbilly werepanthers, witches, faerieland..." all just...well, it doesn't hang together very well, is all. 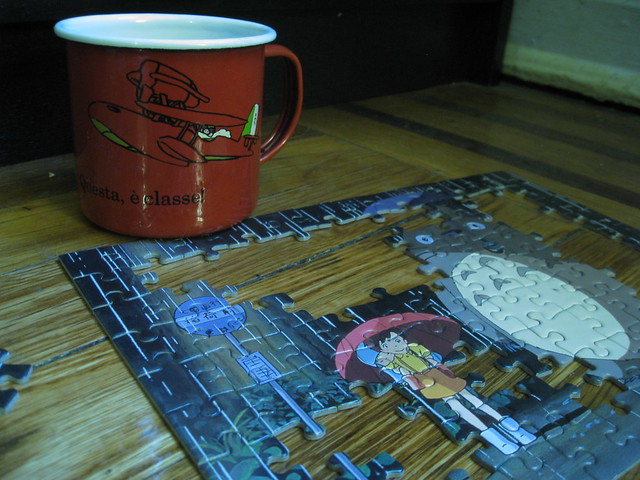 Monday was the actual day of Jenny's birthday, & I think it went pretty well. Sunday night Jenny came up with a brilliant plan-- to finally see the Alexander McQueen exhibit at the Metropolitan Museum of Art-- but alas, the museum is closed on Mondays, so we had a bit of ad-libbing to do! We played it fast & loose but all in all, a success. I made her breakfast in the morning-- eggs & bacon with squash & English muffins-- which was nice of me, now wasn't it? I also gave her presents: two gifts from the Ghibli giftshop in Japan! A Porco Rosso tin canteen cup & a My Neighbor Totoro puzzle. I would have gotten her other things, but she had decided to count Sleep No More tickets as a gift, as well. After breakfast, we decided to walk down to Brooklyn General for a little fabric shopping. Three kilometers doesn't sound so bad...until you get out into that Tatooine sun & Dagobah humidity. & then get lost a little bit. Suffice to say, were were pretty melty when we got there, but Jenny still managed to find the fabrics she needed! Then we walked back, looking for a place to eat & drink & be generally merry & air conditioned. The Clover Club was still closed-- we'd tried it on the way out, to. I've heard good things about Seersucker as well, but no dice. Even Palo Santo was closed-- I guess it is a Monday? But that Monday is Jenny's birthday! We were lost until I remembered-- Bierkraft exists!

In we went, to sit at the picnic benches & eat & drink, et cetera et cetera. We started with Mestreechs Aajt, a sour beer made of blended Oud Brouin, Dortmunder & "primeval beer." Lovely stuff. We were guzzling away & chowing down on A) homemade pastrami spiced brisket & Leyden cheese with homemade sauerkraut, arugala, tomato, onion & grainy mustard & B) Serrano ham, Manchego cheese with fig spread, arugala, olive oil & sherry vinegar. The fig jam is a bit much for me, but that is personal taste. Then were were joined by

elladorian, which I had contrived in secret, via text message! She bought a bottle of Cascade Kriek Ale, another very sour beer, this one with a notable taste of cherries. I mean, since it was brewed with cherries. This aint' rocket science. We topped things off with three ice cream sandwiches! Peanut butter gelato & brownie, ricotta gelato & amaretti cookie, & dark chocolate gelato & mocha brownie. Decadent as heck. On the way back to our apartment-- Maggie in tow-- we saw that the dance shop was open, where I had bought Jenny a unitard many moons ago. We had to stop in & buy her another, & so we did. We were maybe a bit tipsy! But we got a unitard! & then we went back to the apartment to...well, to watch Porco Rosso again! Maggie hadn't seen it, & it suited the mood of Studio Ghibli Birthday! Back home we had a bottle of Brooklyn Sorachi Ace, which was really great, actually, & some bottles of Lagunitas Czech Pilsner-- not skunky enough, said Jenny-- & Old Thumper. We also watched a bit of Archer & of...Pawn Stars? Jenny wanted to watch it, so I put it on!
Collapse