The nearest corellary to this is Garth Ennis' Preacher, I think. Skinner Sweet is a piece of dark Americana, the Wild West That Was-- not a place of paladin gunslingers but of rapists & murderers. I have to admit that the Skinner Sweet story was a bit too "Nineties Vertigo" for my taste-- the swaggering machismo of Skinner Sweet & the melodramatic saga of his lawmen adversaries is a bit too predictable. Is exactly what it appears to be. The flip side of the story, however, is Hollywood wannabe-starlet Pearl Jones, & that is a much meatier text. The aspiring movie actressed turned new kind of vampire is a nice rendition of the bloodsucker myth. The tone surrounding this book is one of "the hell with sparklevamps!" which I have to admit I find a little pedestrian. Pretty vampires have been a part of the mythology ever since Dracula seduced Lucy & let his vampire brides loose on Harker. Lugosi's "look into my eyes..." Dracula is a masculine presence of seduction. Lois & Lestat's fingernails & eyelashes sparkle in the light. & you know what? I can't begrudge Meyers for doing something different with the story. Vampires are about sex & death; twisting the myth to be about abstinence is well within that circle. The new ideas that American Vampire brings to the table is that of a new bloodline. Evolution. Pearl & Sweet are a breed apart-- they don't mind the sunlight, but weaken under a new moon. Wooden stakes are no worry, but gold burns them. I get that-- in my old Oubliette campaign I used gold as a weakness for a bunch of extrasolarian creatures. The old blood-- the vampires of Europe-- suffer the more traditional banes, & the two "races" stand on the brink of open war, & have ever since Skinner Sweet crawled out of his grave. I think the big stand-out here is Rafael Albuquereque's art-- the viccisitudes of the vampire's bodies & the over-the top ultra-violence lead to great panels like this: 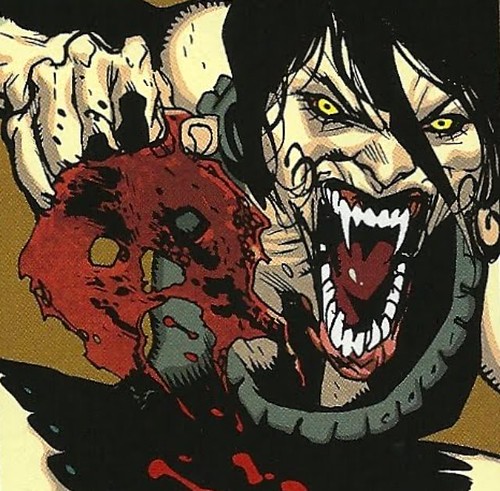 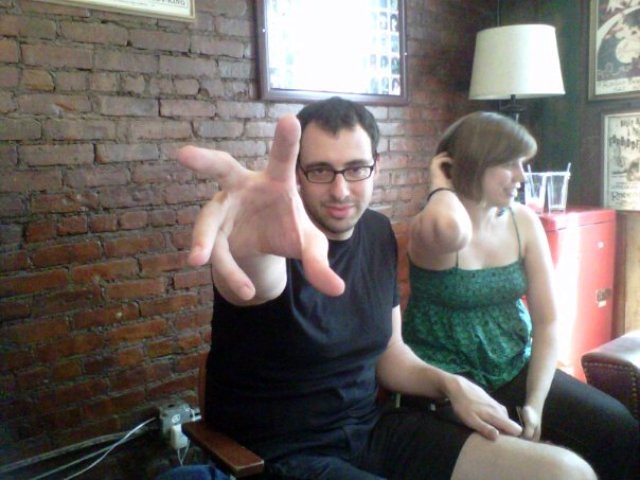 Yesterday was an unexpectedly fine day! After a bit of a rubbish Fourth it was sorely due. I rode the train home from work with Kat, gossiped a bit, & then met up with Jenny at home. We split a Souther Tier 2XIPA while we fooled around the apartment, & then left to go meet

fordmadoxfraud at Ginza for the July Birthdays Hibachi Club, sans

fatbutts. & as was pointed out, this time we didn't have to see The Last Airbender afterward, so that is a major plus. We chowed down on a couple of cold bottles of Sho Chiku Bai Organic Nama Sake & dug into the hibachi. Our chef had the blade dance down well, but...what, do we look respectable or something? There was no broccoli flicked into our mouths? We are not too proud to try to catch food on our faces, chef! Still, hibachi automatically equals good times. After dinner we went to Bar Reis to say hi to Victoria & get a drink. I knocked back a lovely martini & Jenny had this..."honey bee" drink, that was actually pretty amazing. David & Maggie each had a strawberry margarita that...wasn't even slightly sweet? Which I mean in a good way. Bar Reis has upped their game, but the crowd was...really weird. There were, like, a bunch of New Jersey people? Strange. Then home to bed. Nice! & I also had a nice lunch with Terra at Hill Country Chicken, where we cracked each other up & tried to figure out how to play checkers. Oh, you think checkers is easy? It isn't! Did you know they all go on the same colour? I didn't. Did you know there were three rows? I didn't! & were you aware that you can't jump your own men? I was pretty sure you could, but you can't. I don't know that I've ever played checkers correctly. Instead, we played...something. A variant! & I won, but there have been accusations of skullduggery! A rematch is required. Here is the cheat sheet for checkers I came up with, though. It isn't very good, but it gets the job done. 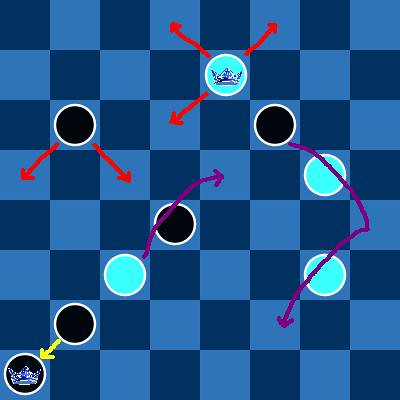