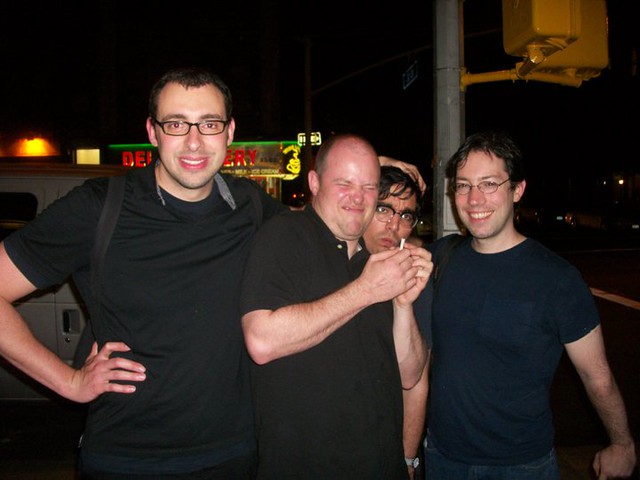 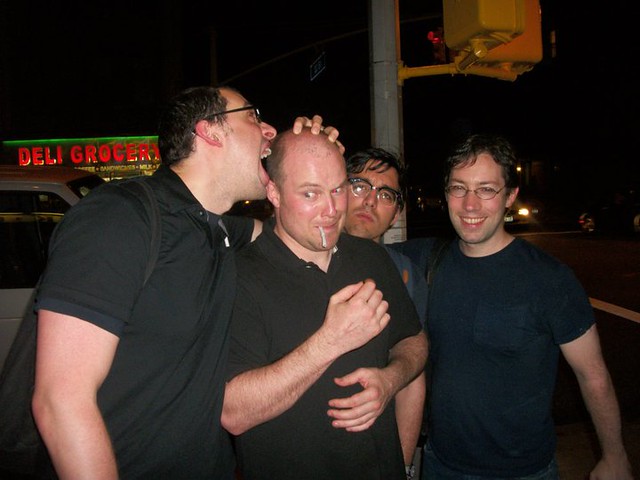 Sunday was another bit of hardcore mixed with a nice roast of lameduck. Spent the morning playing GoldenEye with Dan again, & then when Jenny went to go get brunch I went off to the gym, where I put in a massive hour & fifty minutes. A big chunk of credit goes to She's the Man, the weekend movie-- I like Amanda Bynes from What I Like About You & Twelfth Night is my favorite comedy by Shakespeare, I think. As a rule I really like teensploitation that is done well, & I almost always like teensploitation that is adapted from a classic source-- She's the Man is no Ten Things I Hate About You but it'll do in a pinch. A bit of the free weights, a bit of the machines, & a lot of cardio. Jenny stopped by in the middle of my workout to borrow my keys, since she'd forgotten hers indoors. I need to make note of that, in case I forget my keys & Jenny gives me a hard time. She owes me one! Then home & after an interlude, over to Kira & Nino's! We got sushi from Geido & hung out for a bit; Olivia is still settling (or failing to settle) on a new sleep schedule, so she woke up half-way through supper but was lost in a fog. A baby fog! I spooked her by shouting a little too loud at one point. We watched True Blood, which was...fine! Punk rock Bill is great. & Jenny clearly predicted where this whole Sam & Luna & Tommy thing is going. So-- it was a fine episode. No fireballs made of glitter, for one thing.

The Fourth of July was a bit of an anti-climax. I'd been very much a shut-in all weekend, & was looking forward to finally getting out, but at the same time, events conspired against me. Jenny wasn't feeling it-- she just wanted to collapse into her own little black hole-- & I was too hungry to stop her! Really, it was lunch time & I was crabby! Eventually the food I'd ordered from Bark showed up, just in the nick of time. If I wasn't going to have hot dogs fresh off the griddle, I'd have the next best thing. We watched an episode of Leverage while we ate-- actually, we started the episode with breakfast, continued it with lunch, & finished it that night. A murder mystery party! Getting Jenny some food & a beer was the best I could do; eventually I saw that my presence was just stressing her out further, so I left to go to

fatbutts' birthday picnic in the park. I played a bit of barefoot football; I wasn't very good at it! All the pieces are there-- I can run, I can (sort of) catch, I can block & fake, & can throw-- I just couldn't put them together into a whole, couldn't synthasize an actual performance. Still, I don't think I embarassed myself, even if I was the weakest link. Lilly & James' dog Archie was being a butthead, so they left eight tenths of the way through, & I stuck around finishing up a game of Scrabble-- which never finished-- & Uno, which also didn't finish. Then home, some Justice League Unlimited cartoons, the end of Leverage, some Southern Tier 2XIPA, & bed. I don't know why I thought the 2XIPA would be sour; I guess since they add the ingredients batch by batch?
Collapse