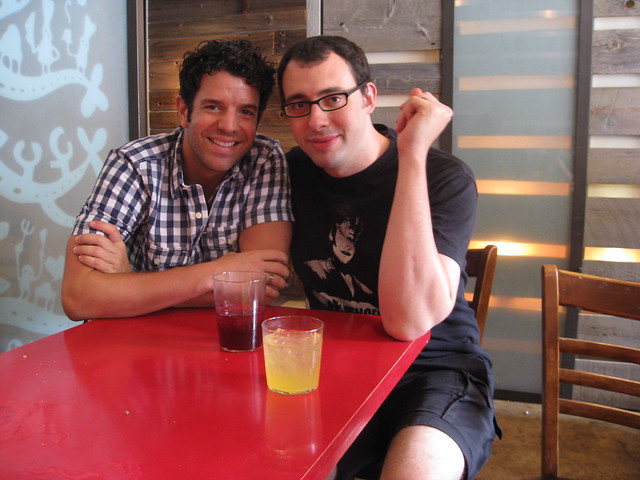 Nice big fat lazy Saturday. I really just kicked back, chillin' out maxin' relaxin' all cool. I played a bunch of GoldenEye with

ankledeepruins's husband Dan. I haven't played multiplayer with someone before; it is fun. Plus, we get to kvetch about the players who drive us nuts. Snipers? I'm talking about you. People who don't attempt to fulfill their objective on "GoldenEye?" You do. Don't use "GoldenEye" as a pool to fill your melee kills-- go back to your "Conflict" map! Also, Dan & I seem to be of the same school of thought regarding our play style-- we run around looking for a fight. We're the opposite of campers. Jenny, meanwhile, has been watching Friday Night Lights...which, eff that show. I mean, I've only seen snippets, but it seems to be exactly the same thing as One Tree Hill or whatever. Primetime Soaps. If you like it, fair enough, but it ain't my cup of tea. My "cuppa." Hungry like a mofo all day, too; I made some decent chicken salad with balsamic vinaigrette but even that wasn't enough. Tore apart the leftovers, ate some granola, just ravenous. I did get to the gym & put in an hour & a half, though a big chunk of it was cardiovascular. I'm not complaining; I plan on heading over there again today, I think. Later in the night I picked up some kebabs from Fatoosh & Jenny & I watched an episode of Party Down. I'm sorry,

ranai, but I don't really like that show. I just don't! It has all the pieces I like-- Lizzy Caplan, that guy who looks sort of like David Tennant, a bunch of Veronica Mars alumni-- but it doesn't come together into something I actually enjoy. Too much stress, too much failure. It is, I think, the opposite of Parks & Recreation. Not just because both have Adam Scott, though that really highlights it-- he's the perfect example. In Party Down he's the failed actor; in Parks & Rec he's the formerly failed mayor who has his act together as budget adjuster. The people in Parks & Recreation aren't fundamentally miserable; the people in Party Down are. Anyhow, with that out of the way, it was bed time. Jenny woke me up in the middle of the night because I was having a nightmare, but it wasn't so nightmarish! I was traveling up an icy fjord in a hollowed out shark, breathing the air inside while trying to keep my legs tucked up so that the other sharks didn't try to bite them off. It wasn't a bad dream, just an adventure dream!
Collapse