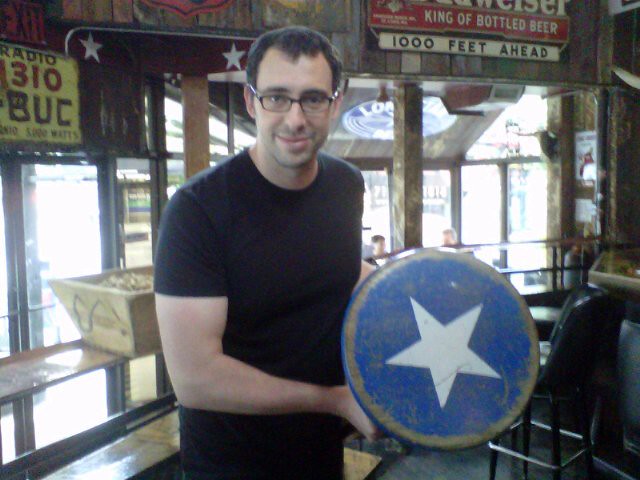 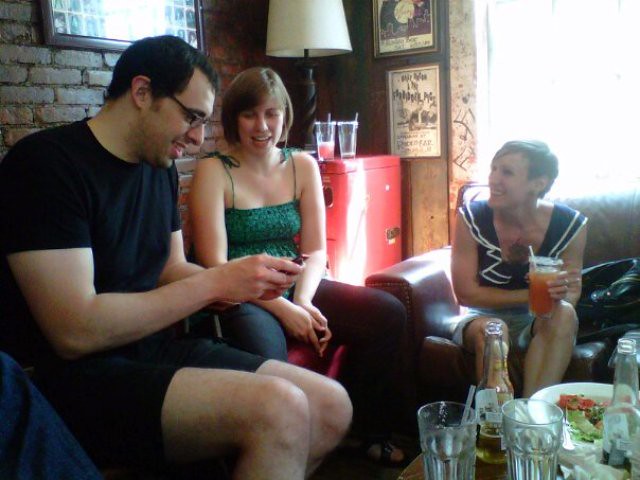 (Everything reminds me of #ThePact, even barstools; Me, Aubrey & Vanessa. Photos by Brian M.)

I'd basically finished up all my work on Thursday, so on my half-day Friday I had a chance to dig into some backlog on a project I'm behind on, which is good. At least tread water. I stayed a little bit late, but not before ducking out to go fulfill #ThePact with Brian & Sherene. Well, with Brian; Sherene came but ate a French Cruller. Now, I've got a bit of a Franco-phile streak-- nice Revolution, guys-- but come on. On this most patriotic day? Son I am disappoint. After work Brian & I walked over to Jocelyn's office, took a look around, & then the three of us walked on over to Rodeo for Aubrey's birthday party! I like Aubrey, but our schedules don't hardly synch up...except maybe drinking during the day! At first it was just Aubrey & Vanessa & the three of us-- Vanessa is the mastermind behind the work fit club, where we climb 22 flights of stairs twice a week. Thursday I did it in five minutes & five seconds! That place Rodeo is alright-- like a Dallas BBQ but not awful? Also, it is enormous! I guess Kip's Bay is sort of in the No Man's Land of Manhattan, huh? They had a pretty good bison burger & a pretty decent margarita, I'll tell you that. I could see going there again; the Western motiff is alright by me. There is a stuffed buffalo after all. I almost said "a giant stuffed buffalo," but that is just because buffalo are pretty big. Then home! I left with Brian & Jocelyn, who were headed to Connecticut, & hoped to get my act together & maybe go to the gym? No such luck, but no big deal. It was a "free" day anyhow. Instead Jenny came home & we just had a nice relaxing evening in; she quilted while I finished reading my book, played a little GoldenEye & then read some gaming stuff. Not a bad little Friday. Today is similarly laid back; my agenda is to relax & go to the gym at some point...& that is about it.
Collapse