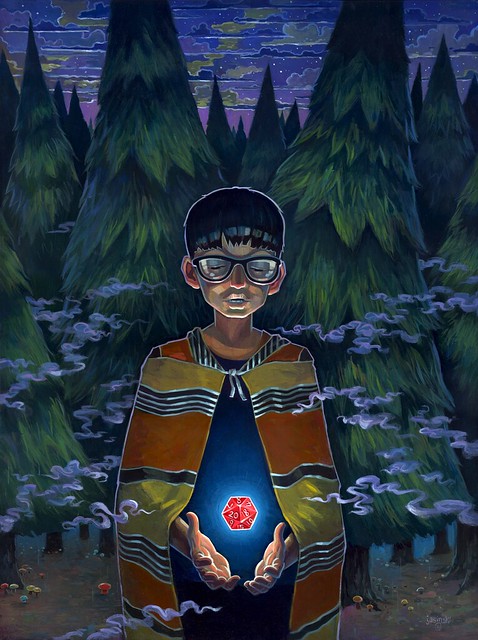 So the thing I've been turning Oubliette into is a sort of recipe, or conditions. A series of narrative components rather than a setting, that when mixed & shaken can result in all kinds of campaigns. The Watchtowers are a big element of it, & one of the most visible, since they are essentially cultural ideas given form. You could have a world where the influence of the Metacultures is below the surface, just in the back of the Narrator's head, or you could have a world where key members of a culture have access to the "deeper mysteries"-- so while perhaps even Pope Urban IV had no notions of what Mother Church was really up to, Thomas Aquinas may very well be hip to their doctrines, dig? The other option is open membership-- the Metacultures as members-only clubs, the way the Unity was in Watchtower Gothic. Or whatever; shake & serve! The cultural definitions are part of this, too; just a thumbnail, a tool to go "okay...so Civilized...." & give you a rough picture of where things are at. The same thing with the races, which I should write up in a pithy little blurb format, eh? There is also a deeper supernatural logic, an underpinning of the Uncanny, but I keep that under wraps; I don't want to spell it all out where the Players can stumble across it, eh? Maybe one of these days I will. A descriptive tool, if not a true one. I actually did embed it in The Wasteland, now that I mention it. The idea here is to give both the Narrator & the Players something to grab onto & build off of. Foundations.

So I'm wondering...what else should I come up with? If you think of these all as knobs, sliders you can adjust the contrast on, margins you can adjust, then what is next? I've thought of having a "Technology" bit, but isn't that already covered in the whole Savage to Decadent field? Well, maybe not, actually. You could have a tribe of Savage Humans who live in a crashed spaceship & a tribe of Decadent Karnaks who live behind great bronze walls. I would want to keep it from being too easy; I'll have to think of a little bit of twist for it. Something simple. In counterpoint...then what, do you start characterizing "types" of technology? The alchemists, the bioengineers, the merchantile organizations...see, nope. That starts being a sticky wicket. Worth thinking about, but I don't want to over simplify...& that might mean that no categorization is really useful. I mean, at some point each culture or microculture is going to be its own thing...maybe Savage to Decadent gives you enough of a seed to germinate an idea around? I'm not sure. It gets trickier when you bring the supernatural & advanced technology in. Hm. Worth thinking about. Maybe I should run a few thought experiments-- take narratives apart to see what makes them tick. What worldbuilding tools are in other people's kit? Like-- in Star Trek II: The Wrath of Khan I can get everybody. Kirk, the Human in the Unity. Spock could arguably be an Alpha, but I'll say Karnak for these purposes, because Khan & his ilk are Savage Alphas, right? & hey, the supernatural schema I mentioned works for Star Trek I as well, come to think of it. & I'm not trying to make a list of random settings you can roll up a culture-- though I guess that is partly an influence. The Old School Renaissance style.
Collapse