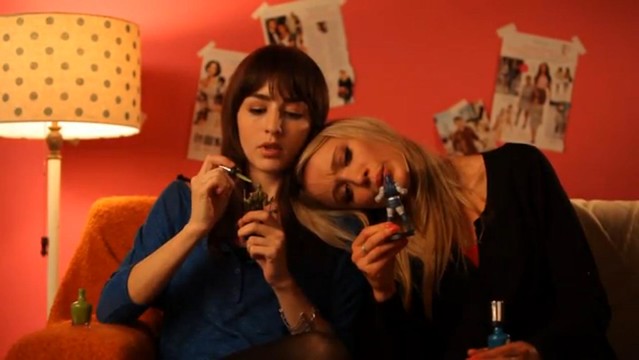 The "lol what if a gurl was into nerdy stuff?" joke can fall flat. By fall flat I mean "be an offensive infantilizing charicature of women filled with backhanded jabs." "I'm Such A Nerd (with Katrina Bowden)" isn't that at all. It is a fun, nerd-affiming short that spoofs expecations in a fairly conventional way, but adroitly, & with charm. The nearest comparison I can make is to Role Models, which blew me away with its surprisingly geek-positive message. Watching the College Humor clip, my thought was "hah! I could totally keep up with that." I mean, it wasn't watching a girl be nerdy; it was watching a girl give a total nerd smackdown in the face of male presumption. Which was great, & like I said-- I also noticed that the "extreme geek" bits were...well, they were all points on which I would happily converse! Halo? I don't care about the online play, which is full of fratboys tea bagging each other, but I still defend the game itself, because it has the simple premise of "what if each spaceship kept a Captain America dressed in Iron Man armor in cryogenic suspension?" I mean, showing up to a group of soldiers & having them thrillingly shout "Master Chief is here! We're going to make it!" is really great. & if we're talking Miyazaki films-- well, I really like Spirited Away, but I just saw Porco Rosso & it totally blew my mind. The use of a whole different set of storytelling tools really worked for me-- but unfortunately the Japanese I learned in college has largely atrophied. I did decide recently that I want to write a haiku that using kanji to make a visual pun-- to make a real haiku, in other words. See, we're not Otakon & Snake, we're more like Meryl Silverburgh & Solid Snake! As for the Star Wars Expanded Universe, there are only two things good about it. The first is Grand Admiral Thrawn, because Thrawn is awesome. The second is Dathomir, because of planet of Jedi & Sith witches who ride rancors is awesome. The Yuuzhan Vong are really stupid, but the pre-painted Wizards of the Coast miniatures for them can easily be re-conceptualized as super great Dungeons & Dragons monsters. I noticed you painting a Darkseid miniature, so I know you get where I'm coming from. I mostly modify my miniatures with nailpolish too-- I painted one all black for my campaign, recently. As for Martha Jones-- well, you've got me there! I've just recently become a convert, on account of the Eleventh Doctor episodes with the Weeping Angels, & haven't begun to branch out yet. You know that old chestnut-- you're either a Star Trek fan or a Doctor Who fan? I thought I was the former, though I'm happy to report that the cliche is bollocks. As for what Batman titles there are, let me clarify a point-- I assume you meant to say what Grant Morrison titles are being published, right? I don't care about mediocre Bat titles-- & anyhow, I'm a Superman fan. Okay, maybe more like Sniper Wolf & Solid Snake.
Collapse