Chiefs keep an idol,
a talisman for good luck.
Mine is the Spider.

This is a graphic novel that uses the text of a 1634 journal kept by a Dutch explorer named Harmen Meyndertsz van der Bogaert. Illustrator George O'Connor fills in the blanks, using the recitation of facts as a skeleton to hang a body of visual storytelling off of. The combination works-- I feel like I've seen it before, but I can't think of another example. Pairing historical documents with sight gags & forlorn vistas really works-- the terseness of the source documents-- a recitation of facts-- allows the storyteller a lot of wiggle room, & the switch between media make the line between historical document & historical fiction really clear. George O'Connor has the cartooning chops to carry off his end of the bargain, & summarizes the charm of Van der Bogaert in his afterword "...thank you also for being the sort of man who would want to buy a bear." This is a nice little comic about...well, about what happened in New Amsterdam, before it was New York. 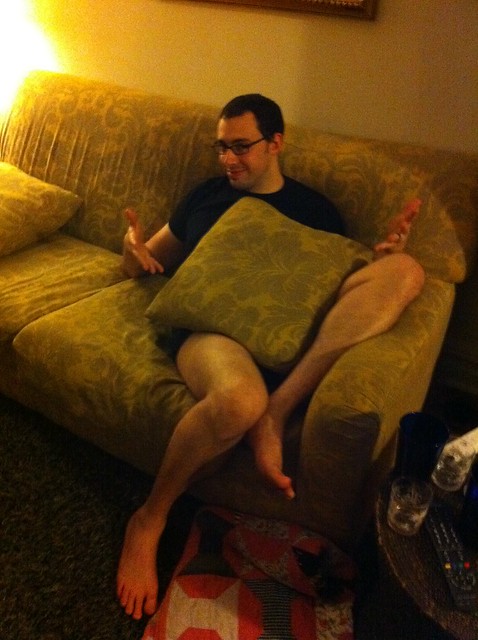 (It looked like I wasn't wearing pants, but I'm wearing shorts; photo by Lilly.)

Television Night! There was a bit of clutter & back & forth with Kira first-- she wanted a tape measurer, & I couldn't find ours! They've got some irons in the fire that I don't want to jinx, but if they work out it could be real handy for yours truly. Let me say here: don't have like, ten people text me a flurry of contextless messages! "Text Kira." "Text Kira." "Text Kira when you get this." I was like "Uh, I hope this is like "can I use your tape measurer?" & not "Jenny got hit by a car" or something, jeez. Give a guy a heart attack! Luckily my biology has two hearts. Jenny showed up shortly after Kira left while I was putting clothes away, & she changed into pajamas before

elladorian showed up. I went out to grab Jenny a burger (I ate leftovers) & to buy some Maker's Mark, & got home in time to

fatbutts & her dog Archie. Lilly had missed the Eleventh Doctor episodes with the Weeping Angels which is a bummer for her, but we plowed ahead with Doctor Who anyhow, watching "The Vampires of Venice" & "Amy's Choice." & hey, who should surprise us with a visit but Lilly's guyfella, James! Both of the Who episodes featured Amy Pond's relationship with her fiancé Rory. There were some clever flourishes with the vampire myth-- making fairy tales vaguely more scientific but still totally fairy tales seems to be a very Doctor Who thing-- & the bit with the Dream Lord was also really well done. & Rosanna's collar? Be still my heart! Not to mention that "vampires living in the canals" was the premise of my second Oubliette campaign. Bravo all around. Also, I never get tired of pointing out that I find Amy Pond much more attractive once Karen Gillan is able to act & user her incredible charisma. Yes! Then today, oh today. I've been pretty busy, but had a work-lunch at Rye House, which did fill my belly quite well.
Collapse