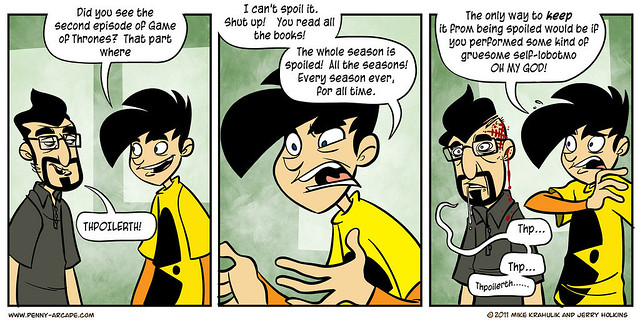 Oh, I guess I was alive this weekend. That was a thing that happened to me, whether I like it or not. I read a gaming book & watched some videos on Saturday, but as for the day itself-- well, that was about it. I went to the gym later in the afternoon & met up with Jenny there, then we came home & watched...nothing? Some comedy guy who wasn't funny? We're in a big of a television doldrums-- we finished Fringe & all the sitcoms we like are in hiatus. Jenny thinks we shouldn't watch Doctor Who because we're watching it with

fordmadoxfraud, but I think that is crazy. They'd be happy if we caught up with them! Worst comes to worst, we could watch the Tenth Doctor's episodes, right? That was about it for the Day of Saturn. That night, I tried to explain to Jenny that Natasha Henstridge in Species is the root of the chupacabra mythos. On the Sun's day, I threw out a bunch of old Vampire: the Masquerade character sheets & a bunch of old love letters. Guess which pile I had more sentimental attachment to! I got dim sum for lunch-- foi gras dumplings!-- & then we went over to Kira & Nino's to watch Game of Throne. Yep, this was an episode I'd been looking forward to. Besides the obvious-- which was awesome-- it is worth mentioning that I think Maester Aemon is totally bad ass. & obviously, Tyrion inventing "Never Have I Ever" with Bron & Shae is a great piece of adaptation. Which, after the Sun chased the Moon, & on that day...well, I went shopping with Edbury at Banana Republic, & then we went & grabbed a quick lunch & then back to the mill! & home, even more grindstone-- laundry day! Which is awful, but at least over...for now. Folding, we watched some of Gene Simmons Family Jewels mostly because we know

onatopofthings really loves it for some reason. I guess the point of the show is...Gene Simmons family put up with him, & also his reality show persona is just another public performance persona? It was sort of charming, but I don't need to see any more.
Collapse