Alliance & Horde
will fall before the Zerg rush;
Kerrigan will reign.

Back when I was preparing to run the first Oubliette campaign, I picked this up in a bookstore & flipped through it, then promptly forgot it existed. Now, thanks to

onatopofthings finding it at a garage sale, I can take another look at it. See, back in the olden days, I ran Oubliette on a heavily modified d20 chassis, & I was always eager for new parts to cobble together something better. I think we all were, drunk on the freedom that the Open Game License gave us; those were salad days for the hobby. Everybody was converting some brand name product into the d20 system, & you couldn't be sure if it was any good or not. Sometimes a real nuts & bolts grognard would be in charge of converting some banal property & really drop some science-- other times a promising license would be sloppily & hastily converted over in a blatant cash grab. Warcraft is in the earlier camp-- there is a lot of promise in this book. Or well-- there is good & bad, but the "bad" isn't offensive so much as things I question. I will say this, right out of the gate: I don't care about any of the worldbuilding at all. I fundamentally don't understand Warhammer Fantasy...because why isn't it Warhammer 40,000? I mean, Warhammer 40K is just mind-blowing; the most metal & most nerdy thing all in one package. Warhammer Fantasy is just...high fantasy. The end. Full of cheesy cliches & everything. If I wanted this, I'd play Forgotten Realms & trust me when I say that I don't want that. Oh wait. Because this is Warcraft. Gosh I'm an idiot. I still wish it was Warhammer 40K, though.

Lets start with the races. Sort of a perfect example of the good, the bad & the crazy that you'll find in the rest of the book. Like...humans! The same as any other 3.5 human, with the extra feat, the extra skill points, any favored class...& then a +2 versus fear, a +1 on attacks against orcs & a +2 to Diplomacy, Gather Info & Knowledge (nobility). What the heck? Humans are already a competitive choice-- why did they feel the need to bulk them up? Total mystery. Ironforge Dwarves are different from PHB dwarves-- no magic resistance, no dodge bonus againt giants, but an AC boosting power. Seems fairly balanced; maybe a little bit superior, but within reasonable margins. Lets look at the elves-- High Elves make no sense to me. Or rather, their magic addiction doesn't. How can it reduce their caster level to zero, if it only gives a -1 & they get a racial bonus of +1? A mystery. Is it meant to be cumulative, I guess? Maybe there is errata-- nope, not that I could find. Anyhow, they aren't the worst, just kind of...crooked. Night elves...seem a little broken. Okay, so they can't be arcane casters (if they are, they turn into High Elves, which is an okay little mechanic) but they have...Spell Resistance, which if you ask me is the best racial power in third edition. They also have energy resistance to cold & fire...but just 1 point. Okay, this is my problem with 3.xe over-all; heck, with 4e too. I would rather a few really good powers in the races, rather than a bunch of nickle & dimes. Resist 1 to cold! +2 versus poison! Oh my gosh do I not care. Make dwarves immune to poisons, & then be done with it. Ugh. Then...+10 to Hide? Dang. Okay, that is a bit much...except hey! They are +1 level adjustment. Well then! That seems fair. Except, so are High Elves? A free "Empower Spell" once a day is nice, but worth a +1 level adjustment? Meh.

You know what really disappointed me? Goblins. Aren't goblins the most memorable thing from Warcraft? "I can see my house!" they shout, from their blimps, or "I wish I had a weapon!" or "do not run! We are your friends!"...that is the stuff I remember, anyway. Here...they are just uninspired. +2 dex, -2 strength, saw that coming...small, okay...+2 to Appraise, Craft (alchemy), Diplomacy & Listen...diplomacy, really?...+4 to Craft (mechanical) weapon familiarity with guns...&....& nothing? The end? What the what? That is such a tremendous let down. Ugh, from that giant heartbreak lets look at orcs, which are actually really solid. I mean, whatever, your standard orcish build...& Rage. Yep, that is all it takes-- give them a daily rage & boom. A functional race. Oh, I guess there are half-orcs & half-elves in there, but whatever...who cares? We end with the Tauren, who are the minotaur-people of Warcraft. I kind of like them. The build is a little...well, maybe good, actually. They are a +1 level adjustment, but are Large, so it probably works out, what with all the weird ways you can break a Large character in 3e. The charge power is also "in addition to the normal benefits..." so it isn't rubbish, either. Not too shabby.

There are a lot of other odd nooks & crannies. One big one-- classes. Warcraft forbids a bunch of classes from the Player's Handbook-- bards, clerics, druids, monks, paladins & rangers. Another "what the heck?" moment-- why? Why. They have prestige classes for druids & rangers & paladins & priest...so why forbid the core classes? I mean-- if they forbade all casting classes & made them prestige classes, that would be a thing, but this...just doesn't make sense to me. Like...rangers? You can't have a ranger? That...why. What. Mystifying. They add new classes-- the healer, which is basically a divine mirror of the wizard; the scout, which is I guess what one of the designers liked better than a ranger; & the tinker...which...is a thing. There is a whole system for tinkering & building. I don't think I like it? It isn't bad though, or broken. A tinkerer is a hard thing to design, I get it; I've tried, I've seen

kingtycoon try, I've read other versions. It is tough. I will say-- the "Malfunction Rating" is inspired. Basically a critical fumble range, from one to five. That right there...that should do more of the heavy lifting for tinkering. & there are a bunch of neat devices-- gyroparasols & goblin army knives are both super brilliant ideas. On the flipside, I think using the PHB rules for guns is boring as heck. The "low damage, high crit range & high multiplier" system that Kingtycoon & I used in his game, that is the way to do it, if you ask me. & feats! This book has a wealth of feats-- it might be worth picking up just for that. Battle Cry is great, & has a whole feat tree, as do some of the Metamagic feats. Magic is...whatever, the way you convert the DnD magic system to fit a setting. In summary, the same as I've been saying all along-- you take the good, you take the bad, you take the rest & there you have...the Facts of the Warcraft RPG. 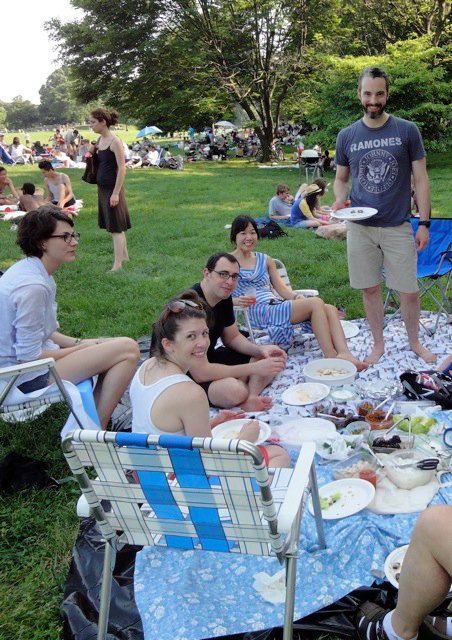 (Picnic in Prospect Park on Decoration Day, photo by Kira D. I think.)

I was kind of a mess when I got home from work yesterday, so I blew off the gym in order to lay down on the living room floor & watch Robotech: The New Generation. That is what I did when I had the stomach flu, so I must have been feeling bad! I guess. I can't ever tell the difference between being hungry or sad or sick. Whatever, I felt bad! Sometimes Jenny tells me those are different things, but I don't know. I decided it would be a good idea for Jenny & me to go out on a date, so we did! We'd totally forgotten that Brooklyn Fish Camp exists, so we decided hey! That was the thing to do. I really dug the oysters-- Island Creek & Rocky Nook, I think. One of them-- again, I think the Nooks-- were really delightful. I totally want to start taking advantage of that place for happy hour oysters. Dinner was shrimp with fatoosh, & it wasn't what I wanted. I had to tear the heads off the shrimp, & the legs & all that. Not that it is a problem...but I like less work for my food. The waitress totally warned me, but I trudged ahead. I did have some serious hushpuppies, though. The women next to us were eating some really stinky mussels-- like, the kind of food that just smells disgusting, even though it tastes good-- & it wasn't my favorite. Still, I want to go again-- I'll probably concentrate on their oysters & their sandwiches, is all I'm saying. Afterward we grabbed some yogurt from Culture-- I had a parfait of raw honey, homemade granola & blackberries. Yeah, hell yeah, Team Hippie Park Slope! Then we came home & watched the finale of Fringe. I saw the final twist coming, but from here? I have no idea how it will go. Which is fun! & then, today. Nino brought me an iced coffee & a sewing machine for Jenny, & then the exterminator came, but otherwise I've been alone, watching Robotech season one Community bloopers. Now I ought to consider taking a shower or something. Pretending to be a real boy.
Collapse