A Feast for Crows by George R.R. Martin.

Valyrian steel,
my sword, black, unadorned, &
the link on my chain.

For me, one of the big perks about finishing this book is that now I can go glean details off of the many wikis & fan sites for A Song of Ice & Fire without fear of spoilers. I can start forming theories-- or I have enough information to start shoring up my theories, & now I can see that other people share the same theories as me. & Oh, I have theories, & the are popular ones, too. I guess the "fan community" didn't like Feast For Crows, which sort of made me pause-- crap, was I going to be let down? I wasn't, not at all. I think the reason people complained about it was that it doesn't really deal with any of the main characters from the previous books. That...doesn't bother me one bit, actually. & really, thinking back-- we get Cersei Lannister, we get Jaime Lannister, we get Arya Stark & Sansa Stark. We get Samwell Tarly & Brienne of Tarth. There is plenty of continuity-- but no Daenerys & no Tyrion Lannister, which is what everyone wanted, I guess. Still-- George R.R. Martin uses new narrators to expand his worldbuilding, & you know I adore that. We see Dorne-- I'm maybe on Team Martell?-- & Braavos, both of which are really ripe for storytelling. As much as I liked the ruins of Ghis in Storm of Swords, Braavos & Dorne are actual living locations, places that are vital to the story of the throne of Westeros. We also get more on the religion of the Seven-- & we watch Cersi act a damn fool. George R.R. Martin manages to bring up both the terrors of modern religion with both the Burning Lord & the Seven as well as some good old fashioned historical church terror-- Maegor the Cruel broke the Faith Millitant, but dumb old Cersi can't see any problem reinstating them, no sir! Oh-- yeah, so this is the book where you really, really, really hope for Cersi's comeuppance. I liked it! I'm especially glad to see the other pieces on the board in play, & to finally get to The Citidal! I hope Sam's arc there is in the next book. & are the Cleganes dead? Somehow, I doubt it.

Okay, & one last thing, & spoilers: So for me, the essential question of the story is-- did Rhaegar Targaryen rape Lyssa Stark to death? Robert Baratheon certainly thought so, but I'm not so sure. I realize that Barristan the Bold might have said how nice & noble Rhaegar was & he still could be a rapist, but I do think if anyone is a good judge of character, Barristan Selmy is. So yeah, that brings us to...Jon Snow. Oh, yeah. I guess everyone has the same theory I do, which I'm glad to hear: Jon Snow is clearly not Ned Stark's bastard. Not because "Oh, Ned is so honorable, he'd never slip!" because, well-- George R.R. Martin has made it pretty clear that all his characters are flawed (& on the flip side, have the capacity for nobility). Just because-- it explains everything. Jon Snow is Lyssa Stark & Rhaegar Targaryen's child, right? It would explain why he has the "Stark" look, & we know that, especially in the bloodlines of Westeros, dark hair trumps light hair. Beyond that-- I feel like the culmination of the Others storyline is going to end in dragonfire, right? Obsidion arrows & Daenerys' dragons. Now, Maester Aemon says the dragon has three heads-- & if Aemon Targaryen talks about prophecy & dragons, I listen. One head is Daenerys, obviously-- but the other two? Well, Stannis could be one. He's a Baratheon, he's got a little dragon's blood in him, right? & it could be Jon Snow, if he's Rhaegar's son. Just a thought. I've also said-- I could see a climactic battle between white walkers (& ice spiders!) & dragons that culminates with the (apparent) destruction of The Others & of The Wall...& without a Wall & without The Others, what do you need a Night's Watch for? Maybe Jon will put off the blacks & be Daenerys' prince consort? Or maybe that is too neat, too pat. 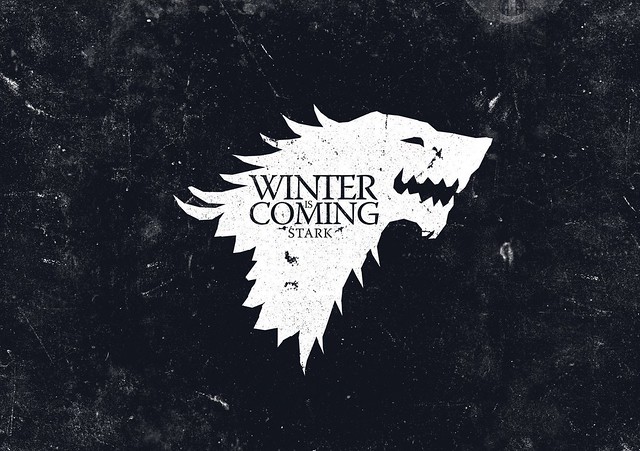 Fu Manchu's mustache
has nothing on Thaddeus,
& his four-fold beard.

Is this where I'm forced to admit that I've never read American Born Chinese? I probably should rectify that at some point, huh? After finishing A Feast for Crows on the subway this morning, I knew I'd need to fit something into the lacunae it left in my commute home, so I grabbed this & gave it a whirl. I enjoyed it! A short form collection of strips originally appearing in the New York Times Magazine, it doesn't have the oomph of a longer form work like Anya's Ghost, but the strictures of the format bring an almost Charles Schultz energy to the comic-- though the protagonist & his adventure are more Bill Watterson. I liked the conceit of a baby that only speaks in prime numbers-- "ga," "ga ga," "ga ga ga," "ga ga ga ga ga," "ga ga ga ga ga ga ga," etc-- & I like the slug monster's smiles & happy feelings. Outcast Thaddeus has a misanthropy that I can certainly understand, as a weird kid myself. The edition I have is a "collector's edition" by First Second, & it is really nicely bound. I appreciate a nice book binding! 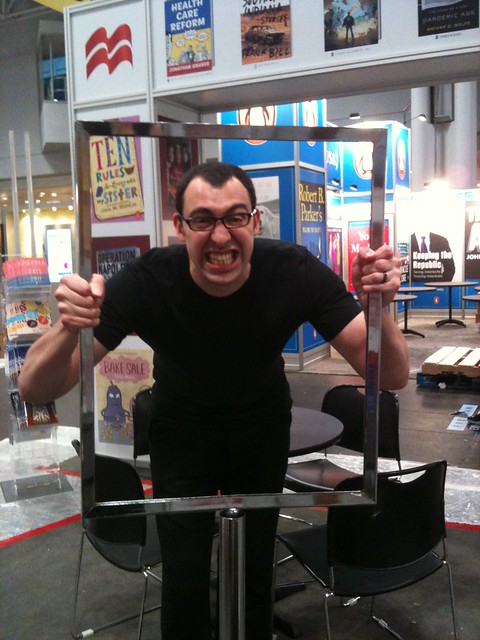 I must have been hungry as hell, because I just partied down on some lamb saagwala & panir tandoori like a maniac-- no leftovers! I drank some coffee when I got home from my Friday half day at work & it set me buzzing & chittering like I was some kind of Third Stage Guild Navigator or something. I'm going off the rails on a crazy train! So that is today, in a nutshell-- I went to work, I did some work, I left early, I came home, watched some Robotech: The New Generation, ate some Indian food, & now I'm sort of in a sargasso zone. I thought about going rock climbing, but then I decided to take a moment & chillax. I'll go to the gym at some point, but I'm just going to enjoy the cesura. Last night after work I went to the bar No Idea, which I haven't been to since Adam left Metropolis. That place is pretty much a dank & musty cavern, but they used to have good drink specials-- & when they got rid of them, we all stopped going. Last night was a double departure-- Andy & Max, riding off into the sunset. This was actually the second phase of Operation No More Andy, with another one still to go! That guy! I've decided he reminds me of Aaron Archnormal, my old roommate. Anyhow, a lot of folks showed up for the party, so that was nice-- then the rains hit, & I decided to stay longer than originally planned, so as to dodge the deluge. Finally bounced out with Jocelyn & Brian-- we walked to the train & parted ways, so it wasn't like we really left together. Rode the train home, blazing through the last bits of A Feast for Crows, grabbed a couple of burgers for Jenny & me, & then we watched the first part of the season two finale on Fringe. Really good stuff, though in sad news I guess the third season isn't out yet? We've raced ahead of ourselves! I guess that means there will be more time to watch Doctor Who?
Collapse