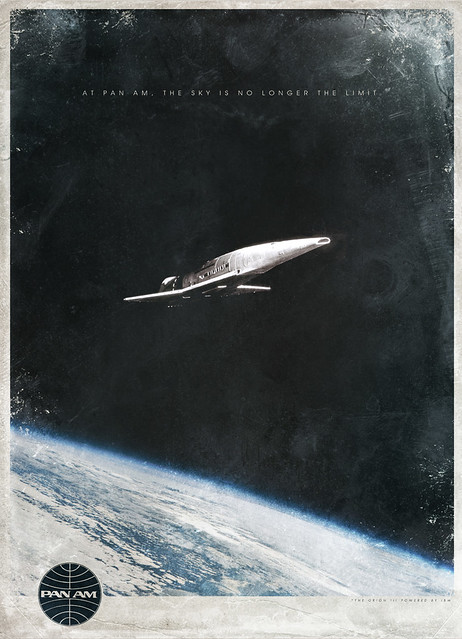 (2001: A Space Odyssey-inspired Pan Am art by Justin Van Genderen.)

At the gym last night, Terminator was on, & by extending the cardiovascular portions of the evening I managed to be there for the fight at the club-- a club charmingly named Tech-Noir-- & the line "come with me if you want to live," as well as the fight at the police station, the line "I'll be back," & the scenes of the grim post-apocalyptic future. Or I guess, apocalyptic future? If you are still fighting, I guess it isn't post-anything. That afternoon I'd also climbed twenty-two flights of stairs with a few co-workers; Vanessa, Ben & Liz. I mention this because today my calves are kind of sore! The fact that the rest of my muscles don't really get sore might mean I need to step up my fitness regimen. I don't know-- I'm on twenty resistance on the elliptical, & I think that is about right? & the jump from curling the seventy pound bar to the eighty pound bar is...stiff. I don't know, maybe I'll see what I can do. After that I came home & tried to get Thai food, only to find out that the place near us was...closed? I assume they got hit by the Health Department; they've been riding down my hood hard, giving stone cold failing grades where they were due. Yay for government regulation. Instead we got some burritos & then Jenny did some work while I read A Feast for Crows. Nice & boring; that is what I want more, just gym & books & Jenny. It seems like that should be a valid option! Then last night I dreamt I was a one man army-- though not an OMAC-- making my way through a castle/abandoned warehouse killing everyone I came across, using wooden pallets cross concrete block support walls where the drywall ceilings had collapsed. Death is coming, people in the dream castle. Tonight

elladorian are coming over to watch Doctor Who-- specifically the episodes with the Weeping Angels-- & drink whiskey, which actually sounds quite lovely. David & Maggie are exempted from anti-social tendencies, of course. 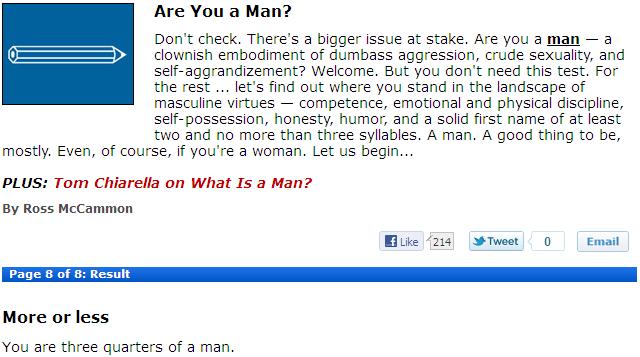 (See also: mordicai.livejournal.com is probably written by a female somewhere between 26-35...)
Collapse