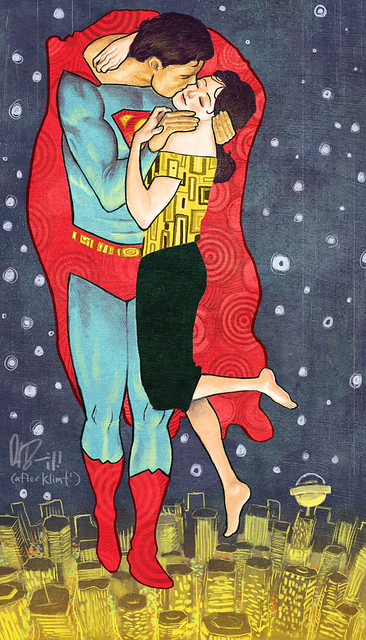 After brunch with Meggy, Jenny & I had a few hours to kill before the rest of our Decoration Day celebrations, so we...well, what did we do? I don't know, there is a nice lazy gap in the middle of the day. I wish it was bigger-- we put in the air conditioners & breathed some condition air, I guess. We also went shopping for the things we needed to make a fancy cocktail-- well, Jenny did the actual making. I...lent emotional support? I...stayed out of the way? I cleaned up! That was my job. A dozen limes were squished & added to some amaro & campari for a refreshing summertime cocktail. We packed it up & hiked over to Kira & Nino's apartment. I'd complained when they moved far away-- the other side of Flatbush-- but I'd grown to appreciate the walk to & from their apartment, in a way. A nice hike through Brooklyn. Now that summer has suddenly appeared on the scene I am...less fond of it. Baby Olivia is even more unhappy; she is not a fan of the heat. Judy & Robert were over, & so we got our picnic things together after a little bit & headed over to Prospect Park. There we met up with Donna & Linda & got cracking! Kira & Robert & Judy had cooked barbeque at home & we brought it with us-- the premise of the meal was to put pulled pork, kimchi, rice, hoisin sauce & scallop ceviche on either a leaf of lettuce or a bao bun. The lettuce leaf as a shell really worked out, & the scallops on their own were maybe my favorite part? There were also rib tips & sugar cookies, too. Along the way we absorbed Karen & Brad & spotted a load of other Brooklyn people, to boot. The park was quite lovely-- Nino & I had to run to the apartment in the middle & return-- but by eight o' clock we were ready to be done with it. Back to Kira & Nino's, put Olivia to bed, & put on Game of Thrones. I don't know what to tell you-- things go from bad to worse, in the best way. Now that we're this far into the series, the plot is fast & furious. I was happy to see Drogo & Daenerys have a tender moment together, & in general was pretty pleased with this episode, even if we didn't get to see the Imp.
Collapse