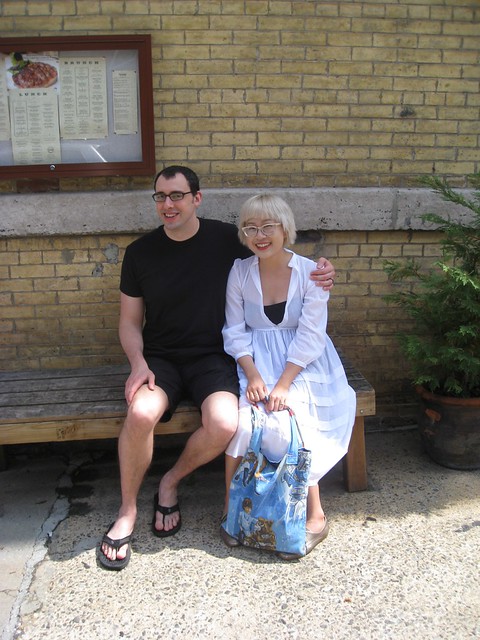 (Brunch at Benchmark with Meggy & Jenny, photo by Jenny K.)

Yesterday was fairly restful, with the master plan being that we would segue from relaxation into going to the gym-- which worked out, actually. Jenny needed a stress-breaker, & I needed to rededicate myself to kicking ass, so it was an endorphin boost well appreciated. It was like the "magic hour" when I hit the cardio machines-- Firefly was on, & so was a Star Trek movie & an Indiana Jones film. An embarrassment of riches. I did a thing in the weight room where I curled sets on a fifty-pound bar while I rested from the seventy-pound bar, which I think was kind of hardcore. After that we came home & I ordered us some Indian food & we watched Rob Dyrdek's Fantasy Factory. That...that show! Rob Dyrdek is hilarious, because for all the goofy crap he does, the stuff he seems most proud of are like, hanging out with Make a Wish kids & the skate parks he builds. & then with the skate parks...he has a whole episode to give credit to the guy he hires to actually build them! In the end analysis, Rob Dyrdek is totally an awesome citizen. Bravo. After we finished eating we drank some bourbon & watched Fringe. Michter's US #1 Small Batch Bourbon isn't Jenny's favorite, but it is on the edge, so she sort of likes it for expanding her horizons. I've got this conception, now, of whiskey, with dry scotches on one end & sweet bourbon on the other, with rye somewhere in the middle. I like peaty, smokey scotches, & we're narrowing in on what Jenny likes. The Fringe episode we watched was "Peter," which-- well, I liked it for the retro title sequence alone. I'm happy that we're back to the over-arching plot, but I was a little disappointed that Walter was almost exonerated. I want him crazy & wicked, in the past, so his crazy & redeemed story arc has more oomph.

Then today Jenny & I had brunch with Meggy! I guess Benchmark is my spot du jour, huh? That is where we went, though I screwed it up! I thought, it being Decoration Day, that they'd be running on their weekend schedule, opening at ten for brunch, but it turns out that they were running on their weekday schedule & opened at eleven, for lunch. Bah! We sat outside on a bench & hung out, so it wasn't a waste of time. I like Meggy, that is pretty official. I mean, unsurprisingly, but in person she's got an energy that would combine well with my lifestyle, if that makes sense. It is a shame she & Chris live on the wrong coast! At Benchmark I got a French Farmer, a cocktail made of Farmer's gin, yellow Chartreuse & cilantro, & I ate lobster bisque, a burger & fries & a salad of goat cheese & grilled strawberries on mixed greens. After that we came back to our apartment & I showed Meggy some of my prized over-sized Taschen books-- Andreas Cellarius, Harmonia Macrocosmica & The Complete Costume History, to be specific-- until it was time for her to go on to the next stop of her whirlwind tour. When she left, Jenny & I bought some supplies for today's picnic & then put in the air conditioners. Heck yeah, air conditioning! Oh, & let me tack this on awkwardly: the other night I had a dream that I was married to a tiny white girl who had become a member of a small Native American tribe in order to run for political office-- since the tribe was in fact a Nation, her position in it had weight. She rode a white horse & was painted in vivid pastel colours. Probably Daenerys creeping into my subconscious. I also had a dream the same night that I was living in a dystopia & married to an Asian girl who was a computer programmer, who operated the dystopia's evil mainframe by writhing around naked on a giant touchpad screen. The nude interpretive dance is how it worked-- but I would scrawl on the pad with my finger when no one was looking, putting infectious memes into the datestream. I had another dream in the same vein as those two last night-- a "weird marriage" dream-- but I can't remember it. I think Jenny was in it, & she wore a uniform?
Collapse