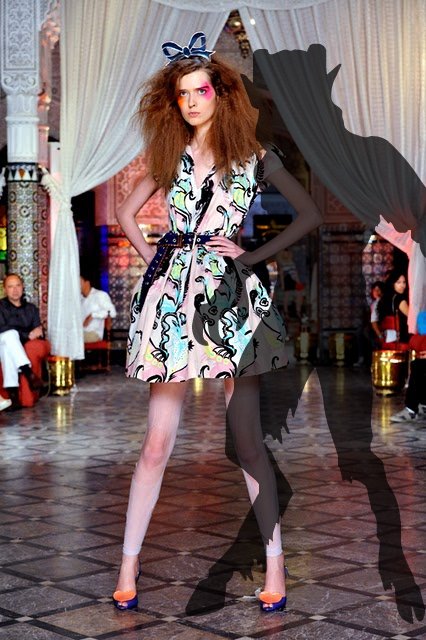 (Ann Ward for Vivienne Westwood Anglomania,
photo by Walter Sassard, messed with Iconian Fonts by me.)

You rescued Meggy! You get 100 XP & a Potion of Haste! Yeah, so that is a surprising, confusing & welcome start to my day. Meggy is in town & was having a bit of trouble finding the person putting her up during his visit, so I rubbed the sand from my eyes & went to go meet her at Tillie's in Fort Greene. Remember in The Anthropology of Magic, when Jonathan Raban discusses the magical map of a neighborhood, delineated by sometimes arbitrary boundaries? Well, Flatbush borders the map of my world, which isn't exactly arbitrary but certainly is true. Now that Kira & Nino live on the other side of it, I've slowly started getting a picture of what goes on in the Far Territories, so off I went on foot to hike over to where Meggy was. I got there before too long (I hope) & met Megatron for the first time! We've been internet buddies for over a decade, & it was nice to get a chance to finally have our corporeal avatars interact. We hung out for a bit-- I ate half her bagel-- & then when we were trying to figure out our next step, Megalodon's friend got a hold of her. Problem solved! I stuck around to see Meggy safely off & then home again, home again, jiggidy jig.

I had been asleep when Meggy called, for a number of reasons. I worked BEA all week, which is draining. In part because there is a lot of emotional labor-- of keeping your game face on at all times-- & in part because staying on your feet for nine hours is tiring. Still, I had a lot of fun-- I like schmoozing, & the nice thing about BEA is that it is professionals only, so there aren't a lot of riff-raff. Which sounds like a jerk thing to say, when I put it like that-- more I mean that when someone approaches you, nine times out of ten they aren't trying to scam you. The other reason I was still asleep at seven thirty in the morning is because I'd been up late at Kira & Nino's watching the Game of Thrones episode that aired on Sunday, since we didn't get a chance to on Sunday. Yep, shit got real, but then, that is why I like the Song of Ice & Fire-- shit is always hitting the fan. I thought it was a good episode of Arya; the actress handles that sword well. Dinner was from Geido-- we got a ton of sashimi & appetizers & split the whole thing. Earlier in the day I had gotten lunch at Rye House with Pierce &

lemuriapress. I drank a couple of beers from Sierra Nevada-- I didn't know they made decent craft beers. Sierra Nevada Torpedo is a pine tasting IPA & Sierra Nevada Ovila Abby Dubbel is a pretty malty Belgian. We talked about their forthcoming miniatures & a bevvy of less work related things. It was lovely.

Wednesday was Television Night, & the finale of America's Next Top Model! Well, I suppose the finale was the week before, but we didn't watch it & luckily we hadn't seen or heard any spoilers. Jenny was a bit mad at me for being late-- a mixture of my new summer hours, a farewell drink at Bar Stuzzinchini for Sara T., & a finicky telephone is a recipe for disaster. We split four pieces of pizza for dinner-- a lasagna slice, a broccoli & chicken, a buffalo chicken & a vodka sauce slice. The crew was-- in order of appearance, not counting Jenny & myself--

fordmadoxfraud. Ryan brought a bottle of wine, which we drank first, & then David brought Irish whiskeys for us to taste-- Red Breast 12 Year was my favorite, but there was also Knappogue Castle, which everyone made fun of me about because when I said "can I see it?" I meant "please show me the label" & not "hand it to me," so when they handed it to me I looked at it cock-eyed. I guess you had to be there? Or not; I didn't think I acted weird but they insisted I had. Anyhow, so Brittani won, which she sort of had to, didn't she? She was by far the best, though a lot of the other competitors would make acceptable models. Like-- some of them were boring television, but so what? Go be a model, okay. There was also a dramatic reading of Tyra's fantasy novel, which sounds either insanely crazy or insanely awful. We finished up with an episode of Doctor Who-- "Victory of the Daleks," the one with...well, with the Daleks in WWII. It was pretty boring, but I continue to like it & I'm very excited for quantum Weeping Angels & River Song next week.

From the door she cried:
"Darwin, set down your chainsword!"
But Charles smiled, grim.

I didn't have a lot to say other than general & overwhelming enthusiasm for Leviathan. I read Behemoth in the middle of the last NaNoWriMo, so I gave that a clipped review, even though I liked it better than the first one-- which is saying something. I'm afraid I might be stuck in the same situation here! I really, really like these books, & Goliath closes the trilogy with a strong finish. The books are so character driven but at the same time so well plotted, that it is hard to discuss it without giving out too many spoilers. I will say this: of course Nikola Tesla is in this book-- Westerfeld isn't afraid to pull out all the stops, also including my second-favorite mysterious impact event, Tunguska (Chicxulub is first). We also get a tour of the world-- Behemoth gave us a good glimpse at the Ottoman mechanical creations, & while Goliath doesn't go as in-depth in any one culture, we get glimpses of what else is going on in the Diesel- & Bio-punk World War I. The giant modified bears of Russia's czar, as well as the two-headed imperial eagle. Japan's swarming kappa, overwhelming Clanker battleships. Pancho Villa's giant fabricated bulls & manta-ray air force. The Pinkerton crowd control walkers & Hearst's mechanized camera platforms. All solid worldbuilding, but the tension holding it together is Deryn & Alek's respective secrets, & their relationship with each other. Very well done, bravo & all that. Keith Thompson really outdoes himself with the art-- "Pancho Villa" & the portrait of Doctor Barlow in the back are probably my favorite. This is an exceptional slipstream work, & Westerfeld talks a bit about liberties & the inspirations for his historical detour, & he muses about what changes Alek, Deryn/Dylan & the crew of The Leviathan might have wrought on the future of that world. Perhaps this is a bit early, but I for one would really like to see Westerfeld tackle World War II from this world's perspective. Japanese kaiju kept in massive kennels at Hiroshima & Nagasaki? Or is that too much? I can't tell. 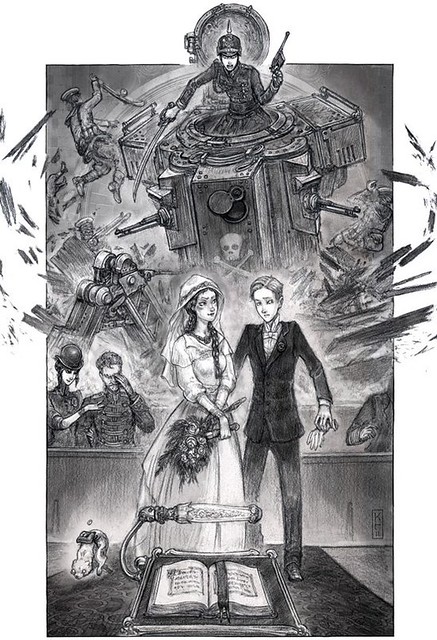