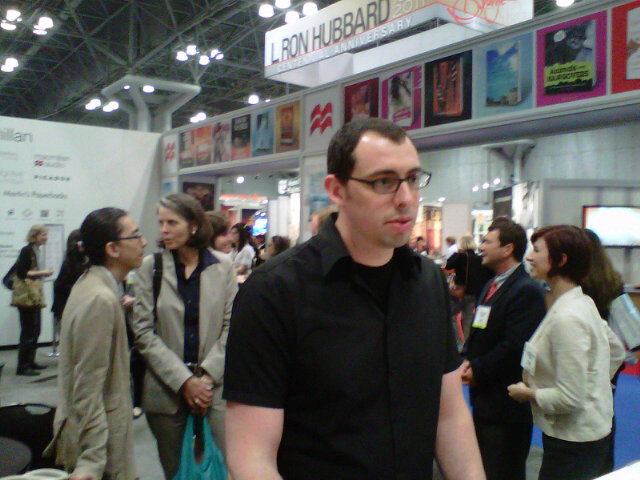 I kept meaning to take an accounting of my weekend, but I just haven't had time. Not in that way where people pretend they are busy, but in an actual "I am very busy right now" way. Here it goes; this is going to be one of those disjointed & muddled outpourings but I'm going to get it down for posterity. Future digital archeologists, you are welcome. On Saturday I got brunch at Benchmark with

fordmadoxfraud. I was "enchanted" by Benchmark the first time I went there, & I know that other people have had uneven experiences but I also really enjoyed my second time. This time...I also had a really great meal. I started with a salad with goat cheese & then my main course was a burger. I didn't need the fries, but they were dang good. The burger-- well, I get a lot of really good burgers in Park Slope, & this was one of them. I got brunch with David last Saturday too; maybe this is becoming a thing? After that we went shopping a bit, & then we parted ways & I went to the gym. Good for me! When I was done tossing the irons around, I went to go meet up with Jenny to have dinner at Marie's apartment with her & wee little Eliot. Marie made us fish & salad & it was great! I gave Eliot a little antique Smurf & we talked a lot about where to hide it. Also, we played a game where he pushed me onto my knees & then Jenny yelled "FINISH HIM!" & Eliot would knock me over. That is the games we'll play with your kid, by the way, head's up. Sunday was sort of the same; Jenny & I went to the gym & then we went over to Kira & Nino's & played with baby Olivia. She's got her "rolling over" skills now, so she's a danger to herself! & she still likes my reflection in the mirror better than she actually likes me. Kira made steamed mussels & pork stew-- & I helped! Actually, Kira had planned on making two other courses, but fun fact: four pounds of mussels for four people is...a lot of mussels. We were behind on watching Game of Thrones, but we only had time for one episode, so...we are still behind. I'm glad HBO is being more explicit about homosexuality in Westeros.

Monday was the start of BEA madness. I am a lunatic & went in on early to set up-- early being eight in the morning. It is funny; you wouldn't think the difference between waking up at six thirty to six o' clock would be a big one, but I sure can feel it. Setting up actually went pretty smoothly. We have a decent sized booth this year & the same sized meeting room-- I feel like it fits. Not too shabby! Everything in it's right place & then I went to go meet up with Jenny. She was at Day of Dialogue & so was up near Columbus Circle; I sat in the park by the fountain under statue of gold. I'm never on the Upper West Side-- does that count as "upper?"-- so it was nice to hang out there & read. When Jenny was done we started on our way to a party but realized we had time-- & hunger-- to kill, so we ended up at the Chelsea Dallas BBQ. What a goofy place; I had a frozen margarita the size of my head & some pulled pork & called it a day. Also-- so, so cheap? What the heck? I guess fast food is cheap; I had sort of forgot. After that we went to a BEA party at Frying Pan, which is just way, way out on a swaying dock. We met up there with Terra & JJ & some other SMP folks & drank a pitcher of beer. Pitchers of beer! Where do those even come from? It was a weird day. Tuesday of course was BEA Prime, the real deal. I spent the morning in the meeting room-- which is basically me rolling the dice & hoping I know who people are & then interrupting them to let them know that their appointments are there. Actually, I'm pretty good at it.

I saw a ton of people on the floor--

onatopofthings is in town, of course, & I ran into Terra Elan who it is always nice to see even though she stopped being friends with me. Pierce &

lemuriapress are at BEA of course, & they are a cornerstone of my week. All the usual suspects, of course, as well-- all the publishing people of Metropolis. I'm not going to play the name game, because I'm already lost. I'm also not going to play the celebrity game-- I never do! I either never notice famous people or am totally jaded; actually both are true. Publishing means that minor celebrities are in the elevator with me enough to have taken the shine off, if I was ever inclined towards being a starfucker, which I'm not. Jenny & I did see Ann Ward at FIT on Monday though, come to think of it. & Margaret Atwood was there, & since I just read The Handmaid's Tale I wanted to tell her that I like her science-fiction novels. I took a break midway through BEA to go to YA Buzz with Jenny & Ryan & Terra & JJ. Some of the books sounded good-- I liked Down the Mysterly River & that Daughter of Smoke & Bone sounded like a new twist on a tired paranormal genre. ...& then I worked in the booth till close-- the booth is a lot more swing; are there enough catalogues, can you tell this guy we don't really take unagented submissions, hand out these books, etc. By that point I fear I might have gotten a thousand yard stare-- "I've seen things...you people...wouldn't believe..."-- but I can snap into professional patter with the best of them. Finally when all was said & done I came home, got some sushi, talked to Victoria & Conner while they made it, came home & was just done. Done. Oh, & Jenny & I exchanged anniversary presents-- we've been married for three years! She got me a 2001: A Space Odyssey themed print by Josh Cooley, & had it framed! 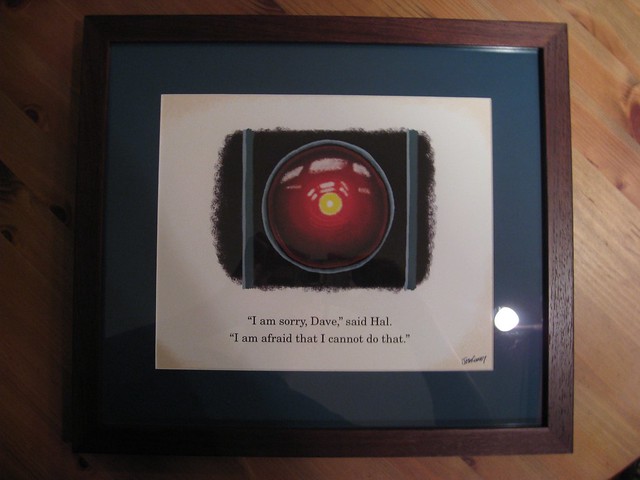