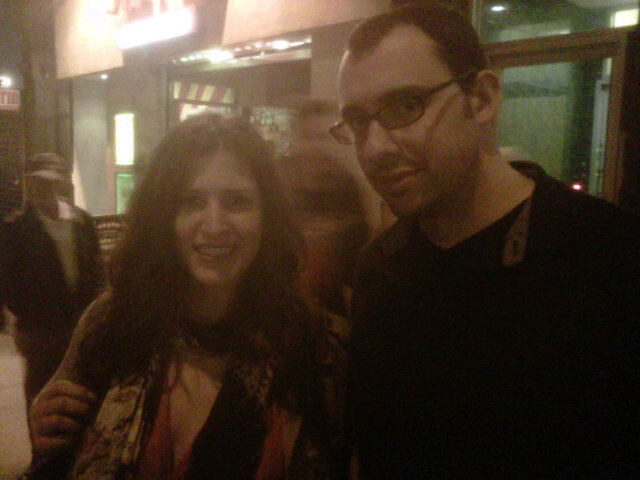 (Me & Jocelyn getting sushi at Jing, photo by Brian M.)

Last night was the book club meeting to talk about A Visit From the Goon Squad. We gathered at Matt & Katy's apartment-- we being me, Jocelyn, Kat & Brian. My opinions are fundamentally unchanged, but there were some very insightful things said-- what Jocelyn pointed out about the note in the wallet in chapter one dangling unresolved, for instance. That is an unfired Chekov's Gun right there; if this was a Doctor Who episode or something they wouldn't have left it hanging. Matt also convinced me to look at it more like an album, with its Side A & Side B-- that excuses the melodrama of each chapter so much, if you view them as songs. Songs are supposed to be histrionic! & I couldn't help talking about Superbrothers: Sword & Sworcery EP, with its waking world Side A & dreaming world Side B. I think it wasn't controversial to say that Scotty's chapter, the Power Point chapter & the last chapter were the best chapters-- I just would go so far as to say the only good chapters, while others liked the rest, too. We drank some wine & sake & Meredith came over. Sushi was on the menu-- I got the fusion roll that I had been denied last time-- & out on the street someone grabbed Katy & my black heart got all ready to go into punching mode, but it turned out he was one of her neighbors just fooling around. Back at the apartment I showed them Baby Cakes' "Role Play Tournament (Be Aggressive)" & before you know it the clock had chimed ten & it was time for me to hit the bricks. I wound my way through Times Square laughing to myself about how Bladerunner my life is. Meanwhile, Jenny had gone to a sour beer tasting-- jealous! I came home & she was in bed & I climbed in after her. Bonus content: I had lunch with Aubrey at Home's Kitchen & the night previous had been me & Jenny watching Modern Family.
Collapse