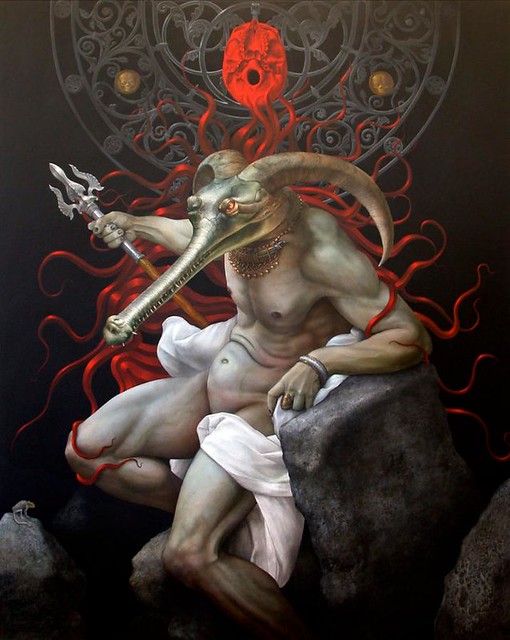 ("Throne of Lucifer" by Kris Kuksi.)

There is a BLUE SUN in the sky-- it hangs heavy, a glowing fruit obscured by the horizon. It shines blue in the night, it glows blue in the day. The Blue Sun gains in size as you go west, rising higher in the sky, plumping out. The light of it is hard on the skin-lotions & creams might protect you, as would darker complexions, but the dull light of the Blue Sun burns more than it illuminates.

Arioch is a kingdom in decline, with many slaves & many nobles, but few free men, few workers. Cities are made of palaces of crystal, but most are crumbling ruins. Pleasure barges ply the sea, with captives pulling the oars, but there are few merchants. From his amber-coloured stasis-globe, the black childlike demon-body of the Archduke of the Demon Princes surveys all that happens in Arioch, rumors brought to him by sinister butterflies. The Demon Princes are the Dukes & Counts of Arioch, the descendants of nobles who sold their souls-- & the souls of their firstborn-- to demons in order to secure the safety of their nation. They are touched by otherworldly taint, traveling from place to place with cursed weapons trying to keep the peace. The guilds known as the Adeptus assist them-- Dog, Pig, Frog, Cow, Horse, Goat & Bear-- each divided into Orders & Arts, each with its own purview. The "Ars Ursus" is the Art of Wrath, the Initiates whose colours are red & who know the secrets & symbols of war, while the Ordo Bos is the Order of the Cow, the blue dressed Adepts that deal in the science of seduction & pregnancy. Before the Demon Princes & the Adeptus came the Witch Kings, the remnants of whom still lurk in the hidden places, greedily obsessed with their phylactery rings & their many elixirs. The Hierarchy are a cryptochurch, a sect of Pardoners & Usurers selling indulgences & keeping the details of the state religion a state secrets. The Adeptus, the Demon Princes & the Hierarchy fight unending wars against the God-Emperor of Triumph & the suicide-saints of the Peacock Lamas. Apart from all of this, living on their island holdfast, are the albino Karnak’s called the Old Ones, who claim to be the progenitor race of all Karnaks, Humans, Alphas & Demi. They wield strange techniques they call "Geometries" which appear to be an amalgam of magic, religion & science all at once.

People in Arioch overwhelmingly speak the language wicked forked-tongue language Baal, with some near the borders of Antiphon speaking the Argot of the so-called “Civilized World” & some speaking the old, holy Henge language. The sing-song backwards-masking language Archae is the dead tongue most commonly found in Arioch.

Names in Arioch are the names of monsters or aliens in pulp science-fiction, usually shrouded in Moorcockian honorifics: Augray, Lord of Chaos; Warhoon, Initiate of the Order of the Pig; Kaldane, the Mistress of Catkind.

The farther into the North you go, the more the BLACK HORIZON rises. On the horizon, like a sun that never sets or rises, there is a hint of black during the day, in which stars can be seen. The Black Horizon. It gets larger the farther east you go, rising from the terminus & looming, a hemisphere of night that shines black when the sun is in the sky.

The folk called The Botanists live in a dense old-growth forest, with territories delineated by breeds of tree. There are no centralized authorities, but rather hundreds of small fiefdoms, each warring with their neighbors & things that go bump in the night. There are clearings kept free of encroaching trees by vast boneyards, cemetery realms ruled by the Voivodes, sometimes called the "blood shirts"-- Alphas who emerge at night to keep the folk of the Botanist’s Wood safe. So too are there hills that break the treeline, where Witchbillies have close knit & inbred communities clutching hexes in their mist-shrouded thorpes. In the wilds you can find the Wolf Shamans, Karnaks who tell of a time when the Bear-Kings kept the Woods safe, though they have long since vanished. All are under constant threat by the Grundies or "green men"-- mindless savages with green skin. Some say they are the remnants of the zoanthropes of Aubade, but they are a cannibalistic race who plant seeds in the slaughtered flesh of anyone they can catch. Their drumming on the Sacred Trees of the Botanist’s Wood can be heard frequently, a haunting threat. The people of Anise have erected a Picket to mark the border between their land & The Botanists, & the volcano Caldera separates the mainland of Araneae. The forest ends abruptly & gives way to blue glowing flowers where the territory that belongs to the Enclave’s factions begin.

The Botanists speak Clickclick, a tongue of glottal stops & smacking lips. Travelling folk may speak the scoundral’s cant, the Zargon. Some understand Argot as well, especially those in leadership positions. Some say the Green Men are capable of understanding the alien Jed language as well. The dead language Argentine, said to be invented by wolves, is sometimes found in the secret lost places of the Botanist’s woods.

Names among The Botanists are either a Slavic or Inuit name paired with a nickname or epithet: Zdravko Hammerhands, Amarok the Bewitched, Nanuq No-Counsel.
Collapse