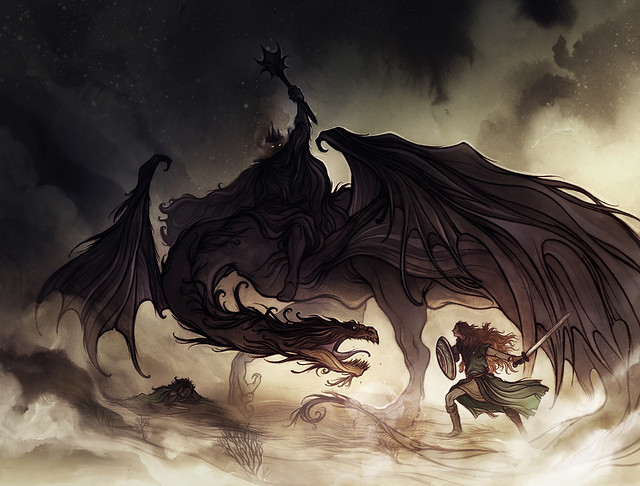 ("Eowyn and the Nazgul" by Cory Godbey, for ArtOrder.)

Oh bother, I don't know? What have I been doing? I couldn't tell you, quite honestly. I must have watched some television-- there was the last half of the Ed Helms Saturday Night Live & the last half of the Tina Fey Saturday Night Live, that happened. There was a "Mother's" Day sketch I really liked. I remember watching How I Met Your Mother, which was basically just one drawn out slap in the face. Really! What happened to that show? At this point I feel like the writers are making a habit out of teasing us with the idea of character growth, then snatching it back. So...that sucks. Last night I drank too much whiskey-- I bought a bottle of Bulleit 95 Rye & made a dent in it. Funny the difference between "too much" as an adult & "too much" as a self-destructive kid. I vastly prefer being a grown-up. Hook is better than Pan, they should tell you that up front. I guess rye is sort of half-way between bourbon & other whiskeys? Jenny & I watched the Castle finale, which I found predictable & she found implausible from a character perspective. I think there were a lot of holes, but I don't watch Castle for it to make sense, I watch it to watch Fillion & Katic-- well & Dever & Huertas & Molly Quinn as well. Anyhow, jam packed, but I think the quantity of events was greater than the quality of events, if you know what I mean. I liked the last thirty seconds of it though! It also inspired Jenny to say that Nathan Fillion should play Will Navidson in a House of Leaves movie. Brilliant.

After that we watched Fringe, which was just sort of a placeholder episode. So far the second season isn't gripping me; too many "mysteries of the week" & not enough meta-plot. I've also continued my re-watch of Robotech: The Next Generation. The genderpolitik of that show is really weird. I mean-- Lancer is Yellow Dancer! Cross dressing is an essential part of his character but not an over-shadowing one. Strange & wonderful stuff. What else? Another work adventure. Jenny has been under the weather a bit, but I dodged it. I went to the gym on Tuesday, & I'm planning on going back tonight. So it goes. I cut my finger on a noodle container from Dumplings & Things. That place is super cheap, but a little hit or miss-- we had some uninteresting beef & steamed kimchi dumplings but some good fried pork & napa cabbage ones. The baos were pretty good-- I mean, pork bellies on puffy bread, right? Over-all, the kimchi was actually sub-par. The noodles were good-- but like I said, I cut my finger! Not their fault, though. No Television Night on Wednesday--

elladorian was sick, so we're saving the America's Next Top Model finale for next week, when

onatopofthings should be here! Now all I have to do is avoid spoilers till then. & that...that is pretty much everything I can think of that I've been up to this week. In other words, not a whole lot, but that is okay with me.
Collapse