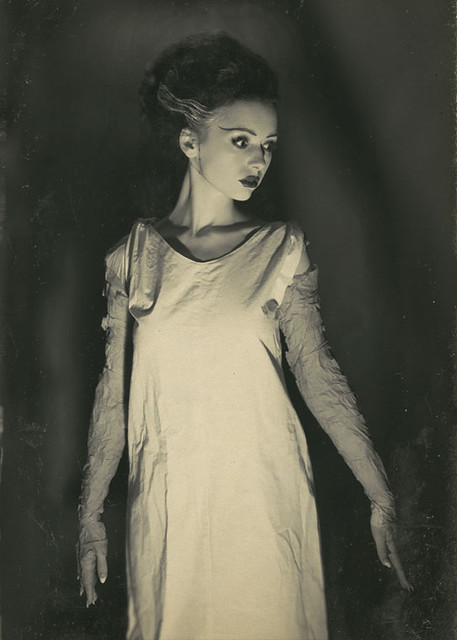 (Bride of Frankenstein, photos by

Woke up at three o' clock in the morning after an vivid dream about...a Frankenstein musical. A stunning stage production, heavily re-imagined-- the Doctor, for instance, was a girl-- Beatrice Frankenstein, & her muse was a man named Virgil. Heavy allusions to The Divine Comedy intermingled with the usual Faust references. Instead of lightning, breath was what made the Monster rise. There was an intensely sensual dance sequence between Beatrice Frankenstein & Virgil-- sort of a tango, with raqs sharqi elements, as well as a strong burlesque side-- & when the tension had built to a climax, Doctor Frankenstein said "Now, let me give it to the Monster!" & dropped to her knees straddling the massive body, kissing it on the mouth. Just then, all the light bulbs in the room flicked & burst, & there was a smell of burning ozone, but in that last flash of light you could say the toes of the Monster curl, the back arch. Everyone in the audience loudly gasped, taken by surprise-- the Monster had looked to be a man nine feet tall & was perfectly, utterly still-- everyone thought it was a prop. The lights stayed out & suddenly there was a rushing & everyone fell to the floor in a tangle of limbs, knocked off their seats. The ushers had run through the floor, pushing people over, upending their seats. That was the signal for intermission-- & we filed out, totally disrupted.

I think this book & The Unwritten are probably behind my strange genderflipped Frankenstein dream last night. I have to admit, I don't have a prior relationship with Seymour Chwast-- to me his artwork reminds me of the Fletcher Hanks comics in I Shall Destroy All the Civilized Planets & You Shall Die By Your Own Evil Creation!. Chwast retells the Divine Comedy with a sort of Dick Tracy Noir Dante & Oliver Hardy look-alike Virgil. For me, hands down, the best parts are the map of the the world prefaceing "The Inferno" & the map of the heavens before "Paradise" (10, 94). That is the sort of stuff I've got notebooks full of. I'm also charmed by how Chwast doesn't gloss over the heavy political message of The Divine Comedy-- he doesn't just focus on the devils, or the journey, but also the petty political bickering that underlies the whole saga. Not to mention Dante's condemnation of usury-- like the Bible, Dante pretty clearly condemns the entire underlying mechanisms of modern capitalism (30, 36). There are a few pages I'm almost inclined to want a print of; for instance, the alchemists in the tenth pit of the Eighth Circle of Hell (50). There are little artistic flourishes that really catch my eye as well-- the way Chwast draws Geryon makes him look like me, if I had a mustache (35, 36). I liked the details on the angels, too-- the flaming sword outside of Purgatory & Gabriel's pilot garb were cute (72, 125). It had been a while since I'd read The Divine Comedy, so I was pleasantly surprised by the rose in Paradise, with the angels buzzing like bees-- it reminded me of Stephen King's Dark Tower series, but also is just a beautiful imagine in & of itself (124).
Collapse