The Unwritten, Volume One: Tommy Taylor and the Bogus Identity by Mike Carey, art by Peter Gross.

The Unwritten, Volume Two: Inside Man by Mike Carey, art by Peter Gross.

Doctor Talos said
Baldanders would cast shadows,
back into the past.

He meant The Castle,
the Mad Doctor, the Monster.
Tom knew he was right.

Imagine Harry Potter was written by, lets say, George Potter, about his son Harry. Sort of the way Alice Liddel inspired the Alice in Wonderland, yes? & then imagine that George Potter disappeared, & his son Harry grew up into the somewhat feckless but basically decent adult, Harold. Harold Potter. Then imagine if suddenly people started showing up in Harold's life, claiming that when he died defeating Voldemort, he was actually reborn in the "real" world. That right there is the frame of The Unwritten, with Tommy Taylor as the hero of a fantastic world of wizardry, Count Ambrosio as the vampiric villain, & Tom Taylor as the grown-up son of the missing Wilson Taylor, making a living on the convention circuit. From there, the story-- well, it hovers on the cusp of committing to the supernatural, at least at first-- there are scandals, there are strange hobos, there are hints & allegations-- but soon dips into a meta-textual romp, a discussion about the meanings of stories. It sounds high concept, & it is, but Carey can pull it off.

kromelizard got these for me for my birthday because, well, he knew I'd really like them.

In the introduction, Bill Willingham really hits the nail on the head when he talks about the "LAF triumvirate"-- literature, animal & fairytale fantasy-- as a movement in comics. He includes things like Mouse Guard, but I think it is almost beside the point. There is an intense interest in stories about stories these days. Did it start with Neil Gaiman's Sandman? Did the spark jump to Alan Moore's League of Extraordinary Gentlemen? Certainly Willingham's own Fables paved the way for The Unwritten. I don't think you need to stretch the arc to include things like Mouse Guard & Bone, though I guess you could. I think it is enough to point to the post-modern backbone running through comic books these days; people are aware of the myth, writers like Grant Morrison are analyzing it in works like All-Star Superman. Putting out entirely out there, I think that is a very noble art-- I think Gaiman's best work is easily Sandman-- & Carey nails it. I might quibble with the reluctant hero-- really? Tom is still refusing the call?-- but the build is so slow, so integrated with reality...well, I'm on board. I also can't stop marveling at how well he "gets" the Tommy Taylor story. I mean, the segments from the "Tommy Taylor" books are...really spot on to the phenomenon of books like Harry Potter. It also doesn't hurt that the cover art is amazing. 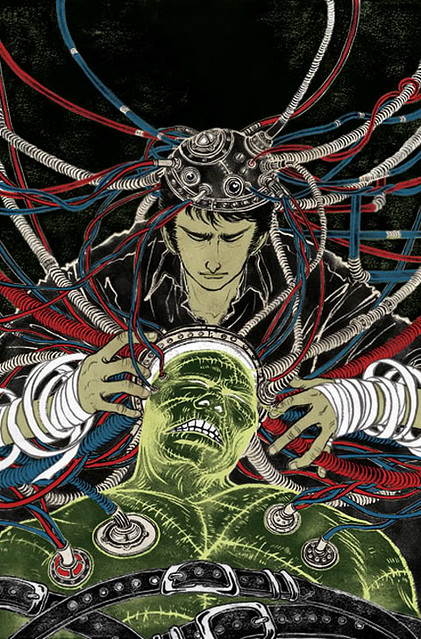 (Cover to The Unwritten, Chapter Three, by Yuko Shimizu.)

Much possessed by death,
smoking in the girl's bathroom,
skull beneath the skin.

Books like Anya's Ghost, Zita the Spacegirl & Koko Be Good really highlight what a great showcase the Flight anthologies are. First Second really snaps up the best of them & gives them a chance to shine. Anya's Ghost is another success story; it manages to be a both a tale of growing up in the suburbs as well as a tale about immigration...& an excellent ghost story that subverts your expectations & then subverts then again. Unlike my favorite immigration story, The Arrival, Anya's Ghost focuses on the second generation, the encultured youth. Actually, strike that-- Superman is my favorite immigration story, so that would make The Arrival number two. Anyhow, Anya's Ghost isn't a feel bad story, or anything so predictable as a polemic about "returning to your roots." It isn't a crude fable, but rather a well-crafted story. It doesn't have a moral hanging over its head like the Sword of Damocles. Narrative is doubled by the art, which is really fantastic. Bosgol manages to deal with topics like sexual awakening in the margins-- again, no heavy hammers!-- largely through her art, which I think is really wonderful. I'd say the best thing about the illustrations is the dance between the cute & the macabre-- the climax at the end being a very fitting apotheosis of both sides of that line.
Collapse