Zak S. is the alt-porn grognard behind DnD With Pornstars & I Hit It With My Axe, so I knew what I was getting into when I ordered this. That is to say, I've seen bits & pieces of it, both on the blog & in play-- & at art shows-- & I was eager for more. Zak's site is my major point of attachment to the "Old School Renaissance," & Vornheim embodies the best facets of the movement, if you ask me. I don't need lists of überpowerful NPCs & the like, & I'm not looking for a map of every single domestic home-- & that is the whole impetus behind Vornheim. It doesn't supply endless banal details but rather gives you the tools to come up with them on the fly yourself. It is in large part a DM toolbox, with the side perk of providing inspiration & a launch pad for new ideas, much like The Dungeon Alphabet. The book is punctuated by Zak's artwork-- to me the heavy lines evoke an almost White Wolf-esque feel, like early Guy Davis. Or Hieronymus Bosch, if he decided to focus on architecture. There is also a great deal of thought put into the layout of the book-- it crawls with cunning charts & maps. The inside of the dust jacket is a map, the cover of the physical book are seemingly arcane charts with clear instructions on the endpaper in the front, the maps manage to express three dimensional information in new ways, & the back is filled with tables. Tables that seem like they might actually be useful, & are definitely fun. Lets see-- let me just give them a quick spin, see what happens. Ought to give you a taste of what you can expect:In tone, the city of Vornheim owes a debt most notably to the cities of Lankhmar & Viriconium, though Zak S. isn't simply recapitulating, by any means. The lens of the game throws up interesting shadows, & Vornheim capitalizes on that-- the Candelabraxian Peryton & the small black marble carried by the Religion Librarian are good examples of that (22, 31). I admit, it is the details that hook me; I want to hear more about the demon with the head of a boat, the body of a bloated man, & the legs of a spider (9)! A festival called the "Day of Wolves" (7)? What is that all about? & then-- here is the kicked that both explains why this is a good book & why the hobby is the best-- I can go tell the story of that demon, or the secret mythology of the holiday. Zak has some clever ideas about quick-building maps by writing down numbers-- "ONETWOTHREE" & they all connect as roads, the O as a circle, the zig-zag of the W, dead-ends of the little line in the middle of the E, that kind of thing (37). he mentions that this is more shorthand than anything else, that the streets don't have to literally spell out "ONETWOTHREE". Hey, maybe I'll use it & have a city where the roads do spell out numbers. See-- that is how a hook is supposed to work. Notions like God's Chess or the enforcement of Sumptuary laws give you ideas, & they don't spell the whole thing out for you, because you aren't a puzzlewit. You are a gamer & you can fill in the blanks yourself-- that is half the fun. 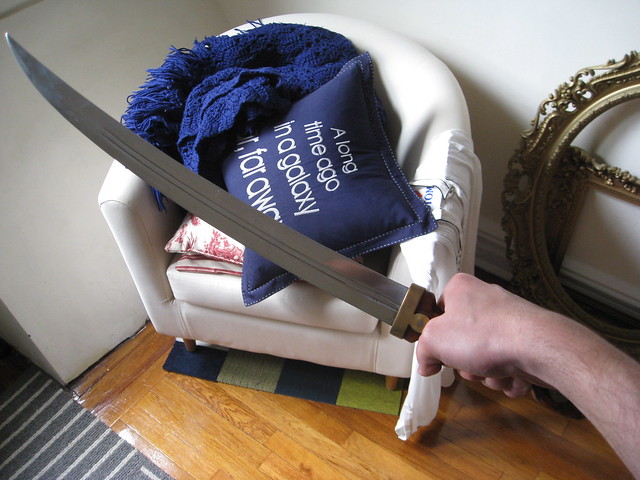 First things first, Jenny found the missing Cossack dagger that Radarless gave me. It had fallen into a strange middle-world in the closet, behind her shoes or something. Also pictured, the Star Wars Crawl pillow Jenny got me for X-mas last year. So that was one minor victory for Sunday! Another was that I finished A Storm of Swords, though that was followed by the minor defeat wherein I realized I was wrong about having a copy of The Handmaid's Tale in the apartment. Still, that is next! Or will be when I lay hands on it. Otherwise the morning was spent running a few errands-- oh & I cooked a breakfast of polenta, bacon & eggs. As a treat for a day well done Jenny & I went to Soigne for dinner-- a restaurant we'd passed a month before & made a mental note to go back to. Park Slope is a funny place-- because Soigne is on 6th Avenue & 11th Street, it seems like it is in "the middle of nowhere." Just a crossroads of residential streets! We had a lovely time, though. I started with a Keegan Ales Mother's Milk, a decent milk stout that was perhaps a little too sweet for my taste, but not a fault of the brew. For an amuse-bouche we were brought some puffed cheesey bread & a little bowl of split pea soup with crackled cheese & crème fraiche. We ordered a charcuterie plate for an appetizer, with...I wish I could remember what pâtés & all there were. There was duck rillette, & cornichons, balsamic reduction, that sort of thing. I ordered a sirloin steak which came with whipped spinach & sunchokes, with some delicious onion rings. The onion was thick & the batter golden. Jenny had some pea raviloi, with a frothy cream sauce, & those were good too. We finished up with some whisky-- Jenny had some Knob Creek & thinks she might like bourbon? I had Johnny Walker Black, since I don't think I ever have, but I don't want to buy a bottle of it or anything. We closed up the night with some Fringe & some Dogfish Head 90 Minute IPA. Jenny one of my toenails green & when I went into the shower this morning I thought I'd broken my toe!
Collapse