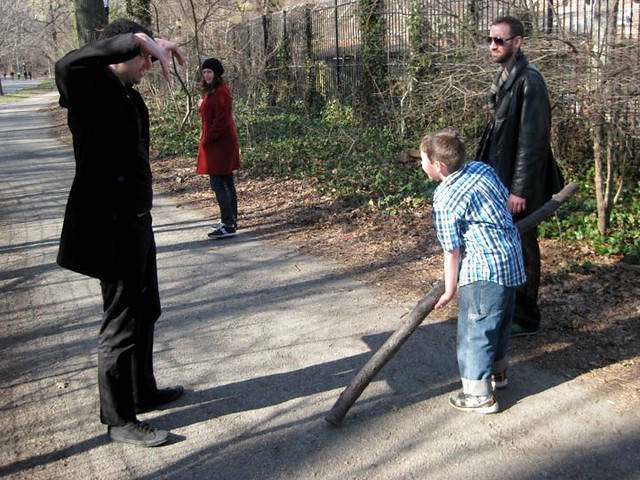 (Me, Jocelyn, Brian & Henry, an old photo from when we went to the Prospect Park Zoo, by Dan K.)

Double header at the gym; I went Friday night & Sunday during the day, both! Well, I had to in order to make it "three times a week," which I've been pretty good about. I haven't been good about sneaking "four times" in there at all, but I haven't let any "two times" slip past, either. Friday Jenny went out with some co-workers for a bit so I had time to put in a pretty solid chunk of labor on the irons! Also, Wrath of Khan was on when I grabbed an elliptical, so I did a long stretch of cardio while Kirk talked about cheating at the Kobayashi Maru test & then Spock figured out that Khan strategizes in two dimensions. Got off, threw some curls & benches together, & got back on to Spock's "I have been...& always shall be...your friend" bit. Came home to eat hot wings with Jenny & watch the season finale of Community & two episodes of Parks & Recreation. Really, really pleased with both. I don't know what to tell you-- if you watch those shows, you know how good they are. If you don't, then you just can't understand. Saturday was pretty laid back-- I got lunch with

fordmadoxfraud at Aperitivo & went to the gym, but mostly I just read the heck out of Storm of Swords. I'm in the home stretch & sort of freaking out. I have no idea what will happen next. The gym was a bit of a dry fire, actually-- I forgot my headphones, so I skipped cardio, & just did lots of machines to sort of make up for it. I'll take it! Jenny had to work, but when she came home I made cod & some salad & we watched Cougar Town & Modern Family. Seriously, we are in the middle of a sitcom Renaissance, aren't we? I know it is hard to believe, but there are some very solid comedies rocking the air waves these days. Which brings us up to right now: Jenny got up early but fell back asleep on the couch, so I'm tip-toeing around & intend to go back to reading my book.

A Storm of Swords by George R.R. Martin.

The nine black horses
come before the white camel.
(Behind the white fawn.)

The third book in George R.R. Martin's A Song of Ice & Fire series is commonly held to be the best of them so far, from what I can tell. I can see why people might say that; it is a seductive yarn, it draws you in & won't let do. It is Ariadne, handing you a ball of thread in the promise that eventually you'll find your way out of the labyrinth. I still might say A Game of Thrones is better just for taking you by surprise, but it would be a close thing, either way. I've been reading this massive tome just as voraciously as I did the first book, just tearing away it with my teeth any chance I got. About a quarter of the way through I realized I was...rooting for the Lannisters? Talk about a testament to GRRM's writing; he manages to make you revile a character, then cheer for them, then back again. The book has winners & losers...& often, they are the same person. There are characters you can't help but want to hate...who go & do the right thing in the eleventh hour, unexpectedly. & when I talk about characters doing the right thing unexpectedly, I don't mean "unexpectedly" the way that you know that scoundrel with a heart of gold or the blackguard with a penchant for doing the right thing in secret will do the right thing. I mean "oh, I actually didn't consider that this outcome was even plausible, but here we are & damn if it doesn't make sense." Heck, even when you are sure the "bad guys" will win, you're not sure. & twists! Some I felt like I should have seen coming, others came out of the blue, but none of them are clumsy or out of character. Heck, maybe the "bad guys" will be a viewpoint character in the next book, maybe Gregor Clegane will start narrating. Damned if I know. I think that some of my favorite bits are "Across the Sea," as they were with A Clash of Kings. The hints & pieces of lost kingdoms are very vivid-- the bronze harpy of Ghiscari perched atop of pyramid? Wow, that is a startlingly evocative image. There is a lot here-- In Westeros, beyond the Sea & above the Wall. I have to grit my teeth to take a break, but it won't be long before I jump into the next one, I can tell. 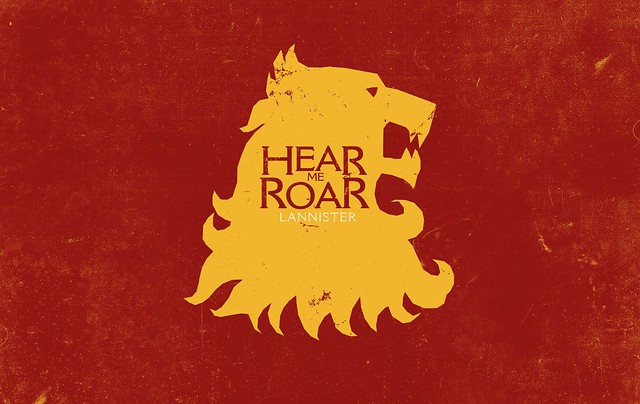