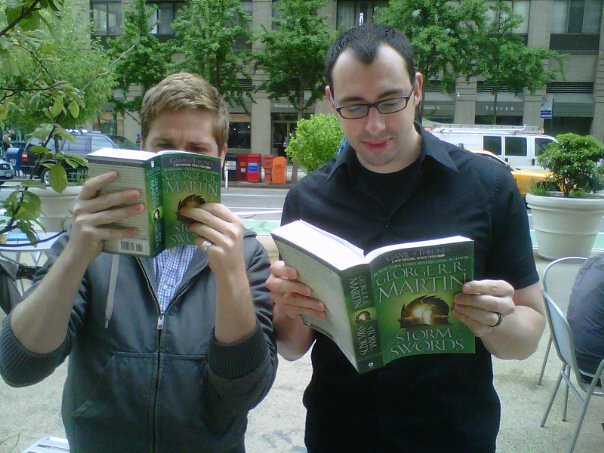 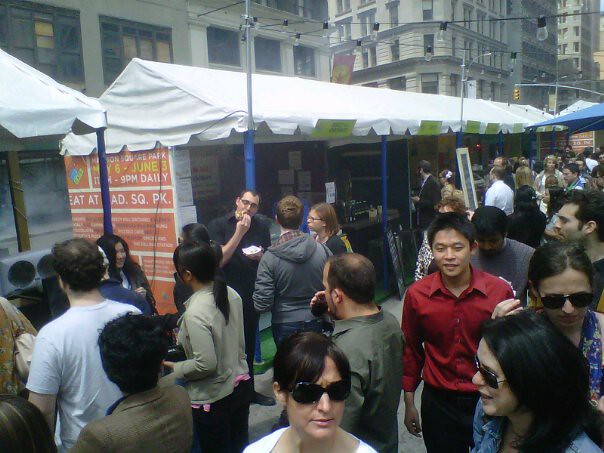 (Reading Storm of Swords with Nick, getting lunch at the food tents; photos by Brian M.)

Yesterday's lunch was another dip into the Food Tents, this time to Eataly's offerings. I'd seen a co-worker getting food from them the day before, & so my course was set. There was a fish skewer & it was really great; tempura fried & quite fantastic. It was also the quickest I'd been fed at the Food Tents so far-- I settled in for a long wait but I was shocked by how quickly it came. I also got a couscous salad, which was fine, but in no way essential. Lunch was with Kat, Jocelyn & Brian, but we quickly joined by Nick & Heather & a few other people from their company, & then by Amber & Sara! Big chunk of Macmillionaires hanging out in the shadow under a giant white head in Madison Square Park. Well, & then today Jenny & I had lunch together! & went to the Food Tents. We split a burger from Bar Suzette & two hot dogs from AsiaDog-- a kimchee one & one with pork belly. Yum. Came back from lunch yesterday for some Work Adventures. Knock on wood. After work I went over to Matt & Katie's apartment with Brian, Jocelyn & Kat. It was a day for a tight crew! I grabbed a bottle of sake-- the cheap unfiltered Sho Chiku Bai Nigori that I like-- & we ordered sushi from Jing. I was going to get the sushi entree, but Kat & Matt both aggressively lobbied for a fusion roll share-alike, so I took their advice & was well rewarded. Well, sort of-- our order got screwed up & so I didn't get the "Perfect Match" but I got the..."Saint Elmo's Fire" instead. Everyone's was pretty good, especially considering it was sushi from a Chinese restaurant! Eventually Jenny called me & was lonesome, so I went out into the brave new world to go home. On the train there was a band dressed in all black to go to a show & they kept giving me "looks." They all got off at the same stop in Park Slope & were whispering among themselves about me, saying they should invite me to be in the band since I was all in black, too. Then at home...disaster! The cable box was acting up, so we couldn't watch the season finale to Community & the Parks & Recreation double header, even though Matt kept texting me about April Ludgate mentioning Neutral Milk Hotel. Then wouldn't you know it, but it was time for bed.
Collapse