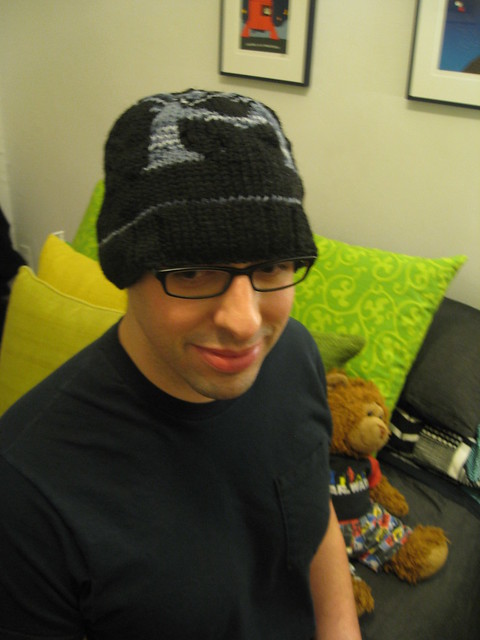 (A hat Leigh made for me, photo by Jenny.)

Last night I came home to find that Olivia was over! Hello, baby, lets mess with your brain a little! I gave Jenny a break & played with her for a while. I think her visual acuity must have just sharpened up, because she really got a kick out of seeing me from "far away." Like, if I'm in the kitchen & she's in the living room, she would look at me & crack up. Congratulations, you are one step closer to object permanence, baby! My big problem with all this is that I'd eaten some mango & had pulp stuck in my teeth-- ugh, the worst. Kira came to pick her up before too long & I snuck out to the gym. Nothing special about the workout, except the fact that it didn't tire me out at all. I was ready to go for another hour when it was time to leave. I'd put in my hour fifteen, but I was primed for more. I blame two things; one, I ate some of Jenny's homemade macaroni & cheese before I left & so I had calories to burn. Two, Chris Hemsworth was cut in Thor. I mean, seriously, that guy was in sick shape. I wish it was my job to work out three hours a day for a year, or whatever, because that would be awesome. When I'd finished at the gym I came home, grabbed a shower, poured the last of the Glenlivet 12 into a glass & settled in to read some more of Storm of Swords. Yeah! Not too shabby. I did have to apologize to Jenny for being crabby; I've been in kind of a stressful knit the last few days. I mean snit-- but speaking of knits, Leigh made me a hat! Today I've been in meetings all morning, but took a break to go to the food tents with Nick Courage, Rachel & Brian. I got an exceptional burger from the Bar Suzette stand; grass fed, yadda yadda, & smothered with pesto mayo. The truffle & cheese crepe wasn't too bad either-- but that reminds me, I need to remember that I owe Brian two dollars. We took it over to the park & ate under the looming albino head.
Collapse