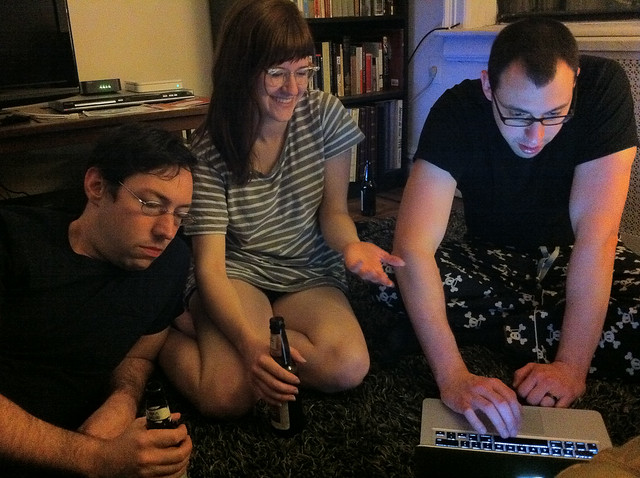 elladorian & me at Television Night, photo by

On Friday Jenny came home ravenously hungry so I dutifully switched out of my pajamas & back into pants & went to Kinara to get us some Indian food. We watched an episode of Parks & Recreation while we ate, & Jenny got teared up when Leslie's present to Ron was to leave him alone. Jenny is an odd duck, but I guess as an introvert, that appealed to her. Which is why I never make her have birthday parties! Meanwhile, we drink some more of the Glenlivet 12, which Jenny has decided she doesn't like. It is too smooth for her taste, which I understand; it seems sort of characterless to me, but maybe it is because I've had a decent amount of it at David's over the course of my life? Could be. After that Jenny read & I knocked around in the apartment. Saturday was a bit more eventful; I played some Lego Harry Potter (80%) & went to the gym-- my shoulder has stopped hurting from last week, so I was able to put in a decent chunk, though I still didn't push anything that could aggravate matters further. Then after that I went to Prospect Park for Omry's birthday. It was up near Grand Army Plaza & I was the first one there besides Amy & Omry, though in due time we were joined by Jordan, Chris & Autumn (who brought their dog Murphy), Judy, Meredith, Toy, Sareen, & Katie & Nicole. We ate a load of falafal & these peanut butter & pretzel & chocolate things Meredith made, mostly. I played some frisbee with Jordan, Chris, Omry & Katie-- I am not so good at frisbee. When I moved to not be throwing against the wind I was better, but still not good by any means. I can catch alright, though. A little coaching did wonders. It started to rain twice, but just a very light drizzle, which passed after about five minutes, both times. After the park we split ways, & I went to Amy & Omry's with Meredith, Jordan & Sareen. We watched some silly animal clips & talked about how autotuning works, & then I came on home. Jenny had to work & then had a Camptown Races party, but she followed shortly behind me. I had time to watch the last episode of Sports Night, & an episode of The Mysterious Cities of Gold before she got home. Remember The Mysterious Cities of Gold? Some weird French animated series about the search for El Dorado. When Jenny finally showed up, she was hungry, even though it was nine thirty, so I grabbed a burritos & then we watched 30 Rock. Today has been slow-- some Saturday Night Live, & I grabbed us bagels for breakfast & made meatball subs for lunch-- & now Kira & Nino have dropped Olivia off with us, while they apartment shop.
Collapse