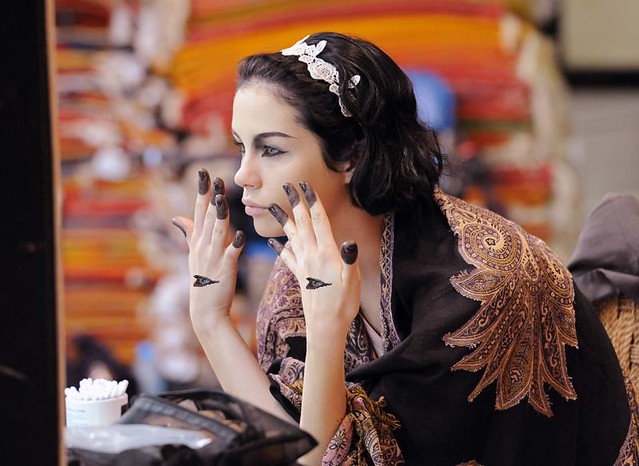 (Brittani; photo by Walter Sassard, MSPaint manipulation by me.)

Last Wednesday was a busy slice of time, I'll tell you what, sure enough. After work I went out to grab a drink with Sherene, Tamarra, Tammy, Andy, Nicole, Loren & Amber. That was sort of awkward, since I only stayed for a few minutes-- enough to show up & then leave! Also, a bunch of executives from our company were the only other people sharing the bar with us. & the bar didn't have a happy hour or anything like that. Still, it happened, we were there, & it changed us. I left in a flash, & jumped on the train. Started a new book which appears to be primarily about First World Problems. I got home & walked into the building's vestibule just moments before

fordmadoxfraud followed me in! Okay, I guess Television Night is kicking off early like we did last week. Jenny came home soon afterward, & said she didn't want to think about food-- so I ran out with David to try to meet

elladorian to get food. Timing was all wrong, so while they grabbed burittos & rustled up a burger & we grabbed some beer. I grabbed the River Horse Hop Hazard & David & Maggie picked up the Peak Organic Simcoe Spring Ale. That was our fuel! We got back &

fatbutts was there with Jenny, sans Archie. America's Next Top Model doesn't start till nine o' clock now, so we had time to kill. I was pushing for Sports Night, & Jenny was saying we should watch Jekyll, which we haven't put on since February. In the end, David & Maggie prevailed upon us to take a middle path & watch the first episode of the Matt Smith run on Doctor Who. They revealed later that they had planned it that way all along! Now, I've only seen fragments of Doctor Who-- I saw the episode about Madame de Pompadour "The Girl in the Fireplace" once when I was drinking with David, & watched most of the last episode of the David Tennant run, "The End of Time." My first impression on watching "The Eleventh Hour" was gosh, I'm awfully familiar with the tropes of the show for someone who has basically never seen it. Must be my race memory. I basically knew the script of the episode top to bottom before I saw it, though that didn't detract from anything. Also, Amy Pond is very attractive. I knew that she was said to be, but from stills I didn't get it. Well, stills don't really do her service; she has a great charisma & also very short skirts.

Then on to America's Next Top Model! Well, actually no. First there was a bit of a lull, too short to start a show but too long to just have conversations during. I chose to subject Maggie & David to the brilliant & horrifying Yeasayer video with Kristen Bell & her pet blob. Also, that video is for a song called "Madder Red" which is the name of one of the characters in NaNoWriMo novel, Watchtower Gothic. Then it was finally Top Model! First off, I should mention, because I think I forgot to last time: when Tyra gets into her "Evil Equestrian Instructer" outfits, I think she's really attractive. She had some fashion jodhpurs last time that were really working for me. Things have kind of slown to a grind, though-- we're down to Grumpy, Dopey, Psycho &...the one with the haircut I like. The tea-set balancing was actually kind of a neat segment-- & uh, Brittani looked really hot. I am going to talk about attractive girls, I can't help it. I don't think a model needs to be hot, but Brittani sure is pulling off walking that line. Anyhow, I'm glad she rocked it with that, & was happy to see the others fumble. The shoot itself was...not interesting. The clothes were boring, the shoot was boring, the photos were boring. Yawn! Alexandria went home with little fanfare, which is fine-- she's no good-- but I probably would have sent Hannah. Now I guess Brittani just walks the rest of the way to the win? Points off for freaking out about eating brains, though-- makes my taste buds nostalgic for Blue Hill. Anyhow, speaking of the science of attraction-- omfg did you see Community? It was the first part of the paintball themed season finale, "A Fistful of Paintballs" & it is basically a Kill Bill parody mashed up with a Resident Evil parody? In otherwords, it is perfect. Alison Brie is killing me with how awesome she is. Not to mention with a little fanservice. So yeah, that was just an incredibly half hour of television last night. I was sort of freaking out, though the Glenlivet 12 Year might have also helped. We knocked down an episode of Cougar Town before Community, & it was a good episode...just got overshadowed.
Collapse