A Clash of Kings by George R.R. Martin.

The lips acquire stains,
the stains become a warning.
Drink the warlock's wine.

It is tough to follow A Game of Thrones. I mean, Game of Thrones was just a haymaker out of left field, a suckerpunch. I had no idea it was going to be good, nor any idea that it was going to be as bleak in outlook & philosophy as it was & I wasn't prepared for how action packed the book was going to be. Lowered expectations plus hard-hitting fiction is a recipe for success. Events in Game of Thrones built to a violent crescendo, & A Clash of Kings follows in the aftermath. It is a narrative firmly committed to war, as I imagine much of the "Song of Ice & Fire" saga is. While Clash of Kings doesn't have the same shock & awe factor-- I advise readers not to get too attached to any character, because GRRM might just kill them off next chapter-- Clash makes up for it with a wealth of worldbuilding. In Game, Mister Martin glosses over the details in favor of interpersonal relationships-- we know there is a religion called the Sept with a rainbow fetish, but what is more important is that Ned keeps to the old gods of the woods, while his wife Cat is faithful to the new faith. Got it, & I agree-- that is more important. With the first book behind us, George R.R. Martin takes the opportunity to deepen the nooks & crannies of the world, & since I'm a big worldbuilding nerd, I was very excited. The Sept? Seven gods-- Father, Mother, Warrior, Maiden, Crone, Smith & Stranger-- all faces of the same god. Those sorts of bits & pieces really reveal that George R.R. Martin has a vast clockwork world inside of his head, full of anthopology, history & the like. On a quick packaging side-note-- the promotional image from the Game of Thrones HBO show on the first book is gorgeous; I hope they are able to get something similar for the rest of the books at some point.

We also get a more diverse picture of the kingdom of Westeros, particularly through the brutal viewpoint character Theon Greyjoy, raised up from the ranks of the supporting cast to full fledged narrator. Theon's people-- the Greyjoys of the Iron Islands-- are especially savage raiders, sort of like Vikings with one major twist. They apparently worship Cthulhu, praying to their Drowned God "what is dead may never die." We go further north, too, beyond the Wall to the lands of the Wildlings. That works out about how you'd expect. Daenerys Targaryen explores the rest of the world, in her arc, giving us glimpses of the lands beyond the Dothraki Sea, including the city of Qarth with its blue-lipped warlocks. I really like the map of the North & the South of Westeros on the flyleaf pages of the book, but I'd really like to see a global map, too. & speaking of Qarth's wizards & the lands beyond the Wall-- this book has a bit more of an element of the supernatural, but not much. You get the sense that there is a rising tide, but you only see hints of it, hear rumors. & of course, you have battles. Not timid things with a sprinkling of glory. Bloody disasters full of fire & fear. Warmongering takes up part of the text, but so does the actual act itself, & the outcome is always in doubt. It is a roll of the dice...& you find yourself rooting for both sides, more often than not. The nation is in tatters & we'll see where it goes from here. It can't be good, that much is certain. Favorites? Tyrion Lannister, by a mile. As I said about the show, I'm really glad Dinklage is playing him. Close second is Arya, & then everybody else I won't invest in, since who can say if they'll make it out of the book alive. Winter is coming, after all. 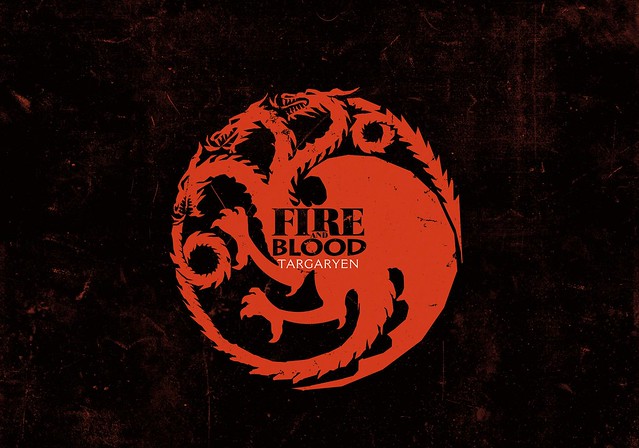