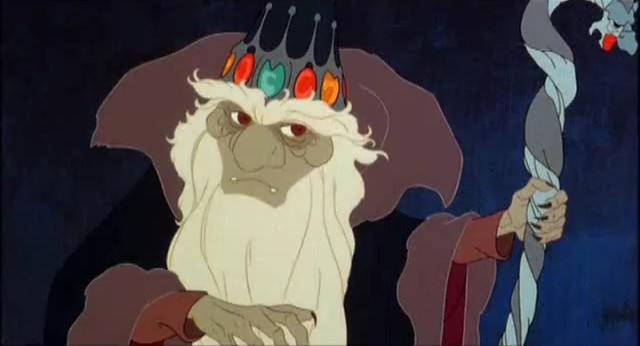 (The magician Mabruk from The Last Unicorn, animation by Rankin/Bass Animated Entertainment.)

So I've mentioned my thoughts on weapons & armor before, but I haven't come up with a satisfying answer. On one hand, I really like the idea of a very simplified & streamlined system, where any given weapon just adds a number of dice-- kind of like how the main World of Darkness book does it. I don't care if it is a katana or a morning star or a kusarigama, if it is a three die weapon then it adds three dice. The details are all narrative. On the other hand...bells & whistles are cool. & weapons aren't in a vacuum-- they evolve through a mixture of demands. You might use that morning-star rather than a katana, if you were fighting a guy in chainmail. & in-between that, you get the direction the World of Darkness Armory books spun off in-- too detailed, & with no sense of balance.

Balance! That is something that I think is important. It doesn't have to be straight forward, of course, but...well, there are reasons people carry knives & not claymores, you know? & that kind of thing is something that I would like to think of an elegant way to represent. I talked about this in the previous weapon post-- this is probably just a rehashing of that. I haven't had any brainstorms, but it is something I chew on, mull over. So I think to myself-- "should weapons have Armor Check penalties?" You know-- if you are climbing a cliff, having a bastard sword dangling from your belt is going to be a pain in the butt, & hiding under the bed is going to be harder with a halberd, & convincing the villagers you mean no harm will be tough with a battle-axe strapped to your back. Along with that are issues like...concealment! You could could conceivably smuggle a pair of sais into the duke's fête, but a warhammer not so much.

Then there is initiative-- that isn't so bad, because you can make a smaller weapon have a bonus, but it doesn't quite wrap around to extra actions or anything. I miss being able to have "flurry of blows" work with a knife, which was my d20 fix. Still, World of Darkness is lethal enough that going first in the initiative order is pretty potent. Another tricky issue is range-- should a spear work at a different range? Maybe, sure-- I use miniatures, so if you say that the threat radius is an extra hex or square, that can add flavor. What about if someone closes, like say someone with a gladius gets past your spear? Or then, same question, but what happens when the guy with stiletto gets in close, inside your sword's reach? Down that path lies madness-- unless you couple them together? Like say-- that a "long pike" gives you an extra hex of reach but leaves you unable to attack the hexes adjacent to you. With a knife-- or brass knuckles or what have you-- you can just say that "close" weapons can be used in a grapple, maybe? Ugh, but then you need to worry about grapple rules.

The flip side is that maybe I'm over-thinking all this. If I adopt something like Traits wholesale, that could help in a big way. I mean, if someone had an object with the trait of "Knife," they could use that as a positive-- "I use the Knife trait, getting under his guard & out of his reach!" or as a negative-- "I can't move in for an attack, since they are sweeping the blade around & it is too short." Same thing in reverse "Oh, my Sword is awkward on my waist, keeping me from sprinting!" & so on & so forth. Now,

kromelizard has said that he thinks Traits shouldn't have a point value, & I kind of see his point? I'm not convinced, though. For instance-- what about someone who has the Trait "King" versus someone who has the Trait "Knight?" How are those balanced? Or well-- part of what I like about giving Traits a rank is that it tells you how much to subtract or add. I don't want them to just be like another Willpower track. Maybe only narratively significant items have Traits-- like, a generic knife wouldn't have knife, but the player's ceremonial kris would. & perhaps exceptional items might have more than one-- say, "Kris" & "orichalcum."

& what about armor? World of Darkness doesn't have very good rules for armor, but since it is a modern game, I can't blame them. Still, I don't run a modern game, so I need to flex the old noodle. Shields are easy-- I think they just add to Defense. +1 or +2, there you have it. Actual armor is trickier. Again-- armor check penalties? Okay, but well...in A Game of Thrones there is a great moment where a far superior swordsman is doomed, because he's fighting a knight in full plate. & well...a guy in lobster plate is going to be a pretty big deal. So how to get that across? & how to keep players from wearing full plate all the time? &...well, how to represent armor? A soak pool would just slow things down, I think. Automatic soak? Could be. Automatic soak with called shots avoiding it? Complicated. Then when they start getting greaves or helmets, what do you do, make called shots more difficult? See, now we are just opening a can of worms.

Adding to Defense is compelling for the sake of straightforwardness, but also, a fellow in a suit of armor is not going to be as nimble as a naked wrestler, & blurring those lines...bah. See, World of Darkness currently subtracts from Defense while adding to Armor. Maybe that is the way to go about it, in the end. Have Armor stack with Defense, so those wearing a mithril shirt can have it, but have heavier armors start subtracting from it? Add in the idea of armor check penalties & that starts getting a little bit more interesting. Hampering Willpower recovery? That is-- you slogged around in chainmail all day, so tonight you are too exhausted & don't get any Willpower back? That has some value as a notion. Still...I can tell I'm over-thinking it. I don't want to get bogged down with these kinds of details, I just want there to be trade-offs between wearing armor all the time or not wearing armor. Same thing with various weapons-- I just want a range of options that are all valid choices.

I guess it boils down to the essential question of roleplaying game mechanics-- simplicity or complexity? Simulation or narrative? I tend to side with simplicity-- I'm fond of saying that the rules of a game should be little white lies, the deceptions that we all know are there but that we all pretend don't exist. That being said, Merits let you add in ad hoc bits & pieces-- the mechanic as mini-game-- & that has value. So I'm left largely in the same rut. I'd like the rules to suggest reality, to hint as the difference between nunchaku & switchblades, but I don't want to make those parts of the game mandatory. This is a feature of Fighting Style Merits; they can do the lifting for you. You can tuck all kinds of rules into there-- though in many cases I think they are either far too narrow or far too broad. Really though, if Complexity is of that great a value, I could play a more complicated system. I just don't want to. The fact that there won't be as many strange rules isn't a flaw in the Trait system, it is a feature. Things like 9-again, those are all advanced rules, & frankly aren't required to run things.
Collapse