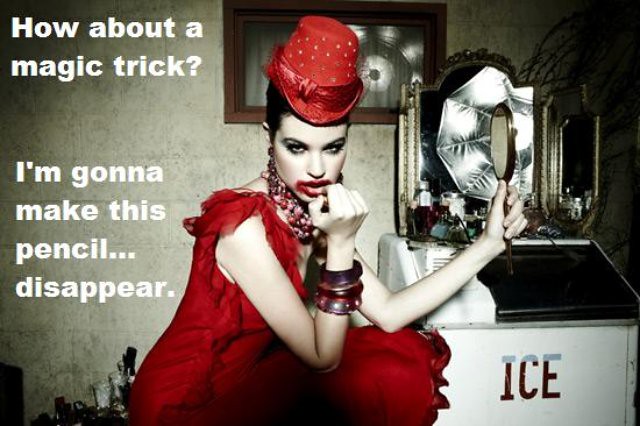 (Jaclyn, Styled by Eric Damon, Photo by Miguel Starcevich, quote by The Joker, MSPaint by me.)

I don't know what happened last night, but we went insane! I thought we had three episodes of America's Next Top Model to watch, so I rounded up the troops as early as I could-- we said six & by golly they were all there by like six fifteen! Gee willikers. It turned out that one of the episodes was just a clip show, but the early schedule really played havock with our senses of propriety. I got home first, followed by Jenny, who said she'd bumped into

fordmadoxfraud on the train, but that they were picking up Mexican food for dinner. Hey, that is what I wanted too, so off I ran to meet them at Rachel's. I'd picked up a six-pack of Southern Tier 2XIPA, because as I've mentioned the only IPAs I really like are floral ones that go over the top. Maggie bought a sixer of Blue Point Summer Ale while David & I waited for the food to be prepared, but really after you had a 2XIPA, you couldn't taste much in the Summer Ale. When we got back to my apartment,

fatbutts was there with her dog Archie, & we were ready to roll. Hey, hey, the gang's all here. Oh, & speaking of beers-- I realized staring at the beer shelf at the grocery store that the Unibroue Ephemere Apple I liked so much in Vegas is made by the same people who make Le Fin du Monde. Oh duuuuh, that Unibroue. Got it. This season of Top Model has gotten much better thanks to the fale idol Alexandria & her rivalry with the child-like Brittani. Not to mention that Michael Cinco's fashion is actually interesting-- that alone floated the first episode. Not that we were tearing through them-- there were plenty of spills, one by Archie & one by Lilly. & a break for ice cream-- I got chocolate with peanut butter! There was a Rob Dyrdek's Fantasy Factory interlude while we waited for ANTM's new time slot, & there were Gollum impressions & sick burns & fighting over the quilt & how osmosis works...I don't know, we were a feisty bunch! I went out in the middle to go buy more beer-- this time Lagunitas A Little Sumpin' Sumpin', a wheat beer that it turns out Jenny had wanted to try. Anyhow, once we invented modeling "H to B-hole," things went down hill. Eighteen beers between five people isn't a whole lot, but we sure acted like we were wasted. During the night, I had a dream that I was on an island made of long white tiles, & that I has skin of white marble, palest ivory stone. There was an idol of a dragon, of Godzilla, with human hands made of gold that were on fire. A kaiju would rise up from the ocean at one end of the white planks, & they we-- for there were other albino rock people there-- would turn into Ultramen & fight it. When we one, a new plank appeared on our island, growing ever longer.
Collapse