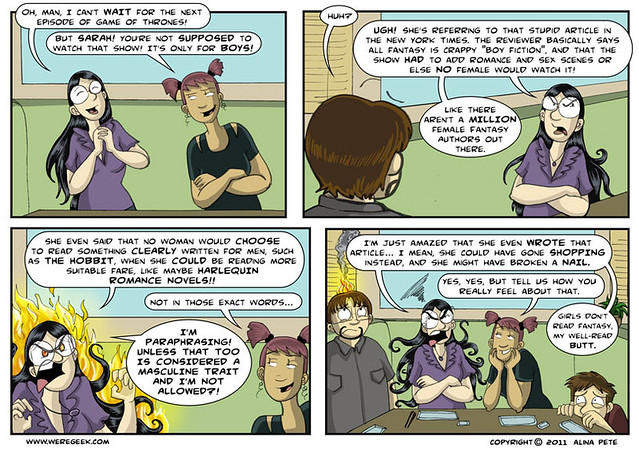 Went over to Kira & Nino's last night to watch Game of Thrones with them. I plowed through the book A Game of Throne last week in preparation for it. That little "A," by the way, makes a big difference. I almost went to war on Wikipedia when I saw that "Game of Thrones" went to the television show's page, but the book is actually titled "A Game of Thrones", so crisis averted. Oh, & speaking of snafus, remember when the New York Times reviewer said some patronizing stuff about fantasy as boy fiction & then in response to the outrage totally avoiding her statements on gender? Yeah, I think the discussion at my review is way better. I liked the show fine-- & I liked it a lotwhenever Peter Dinklage is on screen-- but I like the books better. I had a few quibbles-- Khal Drogo doesn't rape Daenerys in the book, for one thing, & I wish they'd had Catelyn Stark convince Ned to become the Hand, which is how it goes down in the books. That aside, I'm glad to have it in rotation, both as an excuse to socialize with Kira & Nino & an excuse to whet my gritty fantasy appetite. You're not required to like the show, but I think it has potential. Kira made dinner-- pork belly on cabbage greens & sticky rice with scallops & mushrooms-- & that really hit the spot. I drank a Dogfish Head 90 Minute Imperial IPA as soon as I got over there-- I'd spend all morning doing laundry & was on the edge of being fussy because of it. That was eventually followed by both a Evil Twin Yin & an Evil Twin Yang; the former was dark & the latter hoppy, & it wasn't until we'd had both that I saw that they'd sort of meant them to go together to make the ultimate black & tan. Interesting idea, that. We had some Evil Twin Taiji after that, I think, but I had that with food & forgot to pay attention. I finished up with some Goose Island Summer Ale which I didn't like at all, not one bit. As Sunday's go, it wasn't too bad, though I didn't even notice it was Easter. My weekend was kind of a wash; I cut my hair & went to a party on my Lazy Friday, & then I had a Lazy Sunday as well. I didn't even go to the gym, which left me fussy & antsy. We did watch a bunch of television, though-- really prime stuff. Parks & Recreation has managed to become almost saccharine sweet without being gross about it; at this point you just marvel at how likable everyone is. You are all so cute! Then Community was an amazing episode-- a clip show of episodes that never were! & also, Harrison Ford is irradiating our testicles with microwave satellite transmissions. Then we finished up with 30 Rock, which neither of us realized was an hour long until it was too late! I didn't see

comeuppances in the background, but I thought future Alec Baldwin was wonderful. Sideways Alec Baldwin looked...he looked too much like his brothers, I hated it. Oh & while I'm talking about television! Sunday morning we watched three episodes of Rob Dyrdek's Fantasy Factory, because Jenny found out that Big Black is back on it. Rob needs somebody he can't pick on as a foil.
Collapse