I really liked the "Advanced Feats" for the Witch & the Alchemist, so when I saw that there was one for the Inquisitor-- I suppose it is inevitable that all the classes from Pathfinder will have one-- I looked forward to reading it. I know

kingtycoon is playing an Inquisitor in the game he's in back in the Wasteland, & what with Chris being a Pathfinder player now, I've got more & more gamers whose opinions I respect to bounce thoughts about this kind of stuff off on. The thing about Trent's "Advanced Feats" is that...well, they are pretty well balanced. More to the point, he tells you what he was thinking when he cooked them up, so you can follow the logic behind game balance issues. That alone is just...well, that level of transparency is refreshing. Here is the thing about feats-- I kind of hate them, most of the time. I don't like "+2 in a conditional situation!" powers; I feel that they clutter up a character & don't contribute to the narrative. Feats should define what you can do & help flesh out a persona, not just nickle & dime players. The kicker is-- as far as I can tell, Sigfried Trent agrees with me. You don't get garbage, or fodder. More to the point...while these are definitely Inquisitor focused, most of the feats are open to any character. Restrictions that are needlessly too tight is another pet peeve of mine; come on, let people build the characters that they want to play. The "Character Builds" in the article are there to help you plot out your character growth, but meh. I've always been a fan of taking levels organically, as they come-- which is why things like "Improved Judgment" (below) are so important to me.

Now-- I have quibbles with some of the feats, but isn't that what the whole point of a Narrator is? To adjudicate things like this? Like "Defensive Disarm," which lets you attempt a disarm whenever an attack misses you. The commentary says that since you mostly fight monsters, it isn't broken...& maybe that is true in his campaign. In mine it would be a definite no go. Or "Ducking Shot," which he comments is there because Point Blank Mastery requires Weapon Specialization, only available to Fighters. Ugh, remember what I said about restrictions that are too tight? I think a Narrator should throw out the Weapon Specialization requirement. "Improved Judgment" adds five to your class for figuring out class-based powers to make up for multi-classing; such a good idea & a necessary feat, though I think four levels would make more sense, give the the way "Practised Spellcaster" works. Almost every spellcaster I've played in 3e has had that feat, since it goes a long way towards letting you diversify your character classes. "Magical Savant" does the same thing, but with attribute requirements; I think it is too powerful. Making tough statistical choices is part of the game, after all. I'd say it should offer plus two instead of plus four, with an "Improved Magical Savant" feat that adds another two. Then there are feats that are just so yes. "Extended Use" doubles your level for a specific power's duration-- a simple power that adds utility without breaking game balance. "Friend & Foe" is just "Good Cop, Bad Cop," & it really makes it hit home how monomaniacally combat-oriented 4e is. Remember when there were non-fighting abilities? Pathfinder does! There is also "Meddlesome," which lets you increase the DC when an opponent tries to cast defensively. As someone who has played the anti-spellcaster monk, I wholeheartedly approve. "Ranged Maneuvers" lets you trip, disarm & sunder with ranged weapons, which is another solid feat. It adds options, but not distractingly. & hitting a sword out of someone's hand with a shuriken is awesome. 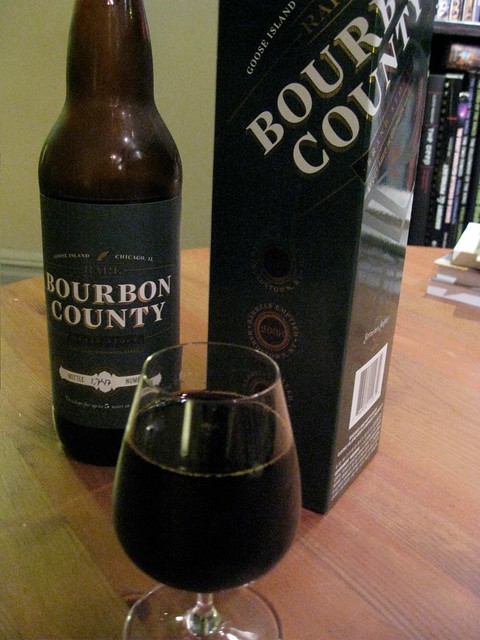 They made 940 cases of the Goose Island Bourbon County Rare, & I got the (hand-numbered) 1,747th bottle of it, packaged on November 11th, 2010. A few weeks ago at Beer Table we were lamenting the (probable) end of an era, with Goose Island being bought by Anheuser-Busch & their brewmaster quitting, when I decided to take the plunge & pick up a bottle of their top of the line stuff. I adore Goose Island Bourbon County Stout, so I figured I'd be all set for the Bourbon County Rare. The beer was priced at $75 on the menu, but Beer Table's take-out prices are really reasonable; they sold it to me for $50, & when I checked online, Goose Island sold it for $45. Last night I thought there'd be no Television Night, but Lily's dog was magically better thanks to the vet & some hefty antihistamines, & while David & Maggie were late, they did eventually come over for a present exchange. I took the occasion to crack the bottle open. First, let me say: I am almost to the point where seeing "ages in the bottle for up to five years" makes me go "maybe I should lay this bottle up for a...special occasion." I feel like that is a hallmark of hardcore grown-up-ness, when you've got a bottle of alcohol you save for the right moment. Ideally, I would have liked two bottles; one to drink now & one to forget about for a few years. How was it? Dreamy! In all honesty, let me say that I don't think it was all that different-- to me-- than the Bourbon County Stout. It had more apparent alcohol on the nose-- like a hammer-- but a very similar medley of raisins & chocolate &...well, bourbon. I think aging it to mellow it out might take the Rare to a whole new level, though. Still, utterly wonderful. Black as the engine oil in Glastonbury Grove! After that we drank some Kings County Distillery Corn Whiskey Moonshine. It smelled a lot like tequila, & tasted...well, smooth, for moonshine. Not so smooth that we didn't all agree to mix it with some gingerale, though. 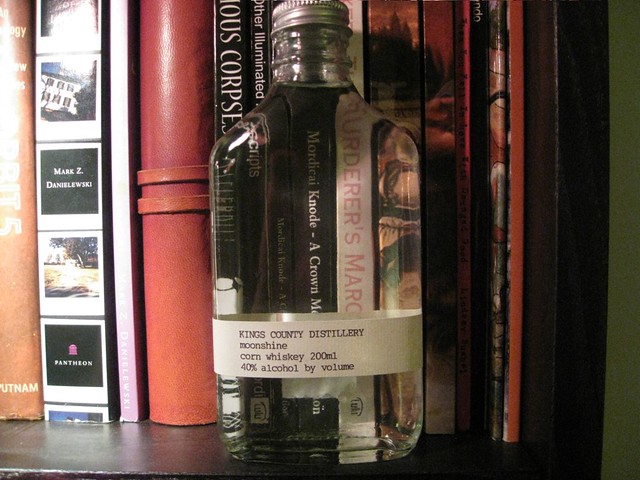