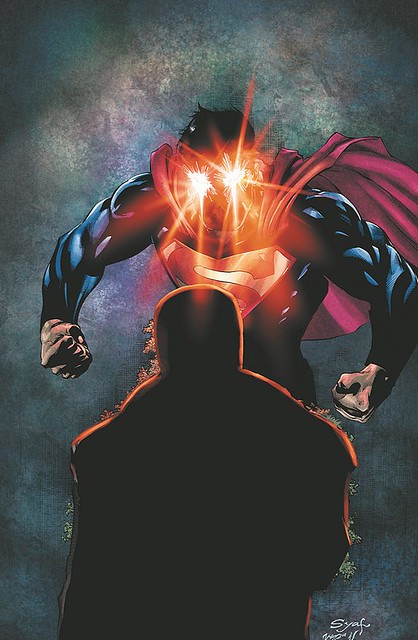 ("The Search for Swamp Thing" #2 by Marco Castiello.)

I really like it when Kryptonians are drawn with that nimbus of power, with red death pouring from their eyes. That element of menace is what really sells their alien nature & the potential for that inhumanity is what puts Superman & the rest into such sharp relief. Speaking of comics, I've been thinking a lot about the stunted "next generation" of comic book heroes. I mean, take Robin. Lots of people know who Robin is, & a bunch of the even know that is name is Dick Grayson & he is the son of murdered acrobats. A very small subset of people know who Jason Todd is, but at least Jason Todd carved out some mythic territory as either "the Robin who died" or "the Robin who became evil." Fair enough. Tim Drake? Sorry, he's got nothing. A girl Robin-- Stephanie or Carrie-- would have some cache, & I think Damian is great. I'm getting off topic though. My point is, people know about Robin, but they don't know anything about Nightwing. Which is a shame-- "Robin grows up" is a good story. Still, in a world where no one gets old, it is hard to find a niche. Batman is always going to be in his prime, because that is the nature of a mythic tale. That doesn't prevent there from being "Batman past his prime" stories like The Dark Knight Returns, though. That has always been my solution-- I think there should be a loose sort of "future" stories, where the protégés have come into their own. The thing that I think most is that the "Big Three" should really have a lot more cross-over with each other's sidekicks. I mean, Nightwing has it right there in his name; Nightwing was the name of the Kryptonian "Batman"-style noir hero that Superman sometimes impersonates when he's in Kandor. I think Nightwing should be a Gatchaman-esque Science Ninja, complete with state of the art Kryptonian technology. Supergirl also fits in-- she was trained at Themiscyra, the Paradise Island of Wonder Woman & the Amazons. That angle should totally be played up. Which means that to complete the cycle all we need is for a Wonder Woman sidekick to become Robin, right? 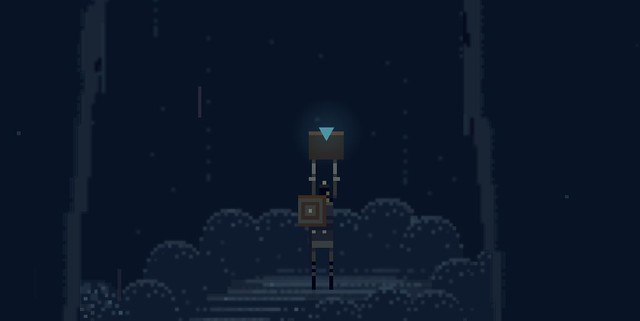 Remember last month when I was wigging out about how to set up my cell phone? Well, it is that time again! Jenny said she was having a hard time with my wake-up alarm, "Born Secular" by Jenny Lewis & the Watson Twins. This is very, very sad, because I really like it! It puts pep in my step! It starts the day off right! If you don't know by now that I very much like Jenny Lewis, you are hopeless. Still, Jenny says the lyrics wake her up, & she does cover the lamp in scarves when she reads at night, so I owe her one. So of course...I spent all lunch break & ever since I got home messing around on the site

iphisol showed me, Myxer. It is a handy little ringtone maker, that site. I replaced Aang from Avatar the Last Airbender saying "they do get their mail on time!" as my text message alert, which is sad, but instead I put a Sword & Sworcery LP bonus track in its place, of the Scythian saying "ugh, rainbows...", which is so, so good. I'm still deciding on what to set as my alarm now. Right now the front runner is the opening music to "The Big Guns", because if I can't have one nihilistic Jenny Lewis song, I'll have another! I teased Jenny that it might be a Protomen song, but I actually did convert the begining thrash of "The Fall", though it is probably a little too kick ass to use every day. Another option is the opening riff of "The Prettiest Weed" from Sword & Sworcery, which would either be overdoing it, or make the whole theme come together. I'll probably leave the Jenny Lewis there, though. I did cut the intro to "Born Secular," just the snare drums & organ, & I might use that. Anyhow, while I was doing this, it started raining like someone slit the belly of the sky with a knife, so I called off going to the gym. Jenny is over at Kira & Nino's & I made myself a dinner of...melted brie & ricotta on an English muffin & some stove-top stuffing. I'm a real piece of work, huh?
Collapse