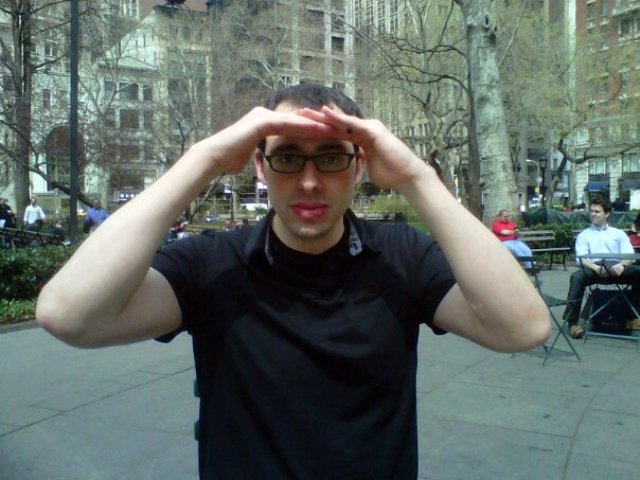 (Me with the sun in my eyes in Madison Square Park, photograph by Brian M.)

I didn't do anything this weekend. I just sort of floated around the apartment in a coma. I still haven't shaken the gloom of Sin City, now that you mention it. I really don't know what to talk about when it comes to listing the events of the weekend, but it was a couple of days of life, so I want to keep track in some way! Mostly I just articulated my motto: I'm more invested in being interested than in being interesting. Being interesting is for the birds; personality as persona is so early twenties, or early twenty-first century. Or both. Well, I do know that Jenny & I watched eight episodes of season two of Fringe. That is great for a number of reasons. One, it is a good show, but two, the movie version of The Last Unicorn is next on our Netflix queue. We also watched the Helen Mirren episode of Saturday Night Live-- I found the "Two Sides!" sketch to be uncommonly funny. Sure, it was a bunch of jokes made about Hugh Jackman being both "the most masculine man" as Wolverine & "the most feminine man" as host of the Tony's, or Gerard Butler being both the king of the Spartans & the Phantom of the Opera...but they weren't jokes at anyone's expense, but rather an exploration of the juxtaposition. Redefining masculinity, ya heard? We also watched an episode of Castle, & I watched a few more episodes of Robotech: "The Next Generation" while waiting for Jenny to wake up one morning. All of it wrapped in black gauze, trapped in a confusion of jet lag. I did manage to go to the gym on Sunday-- Ghostbusters 2 was on so I stayed on the elliptical a bunch, but I did my hour fifteen & I did a fair circuit of the other stuff. I'll take it. I saw Victoria for a second, said hi to her, but otherwise it was just the two of us. I joked to Jenny that it was nice to have a chance to relax & spend time together, now that our vacation was over. Today I had lunch with Brian & ran around like a chicken with its head cut off. I had hoped to sort of spend today catching up & getting situated after a week of not being here, but alas, there was other stuff in the way.

Cannibalism!
The sleeper has awakened!
Muad'dib the Autarch.

When I ordered this, it had the author listed as Gene Seabolt, & I thought I was picking up a cute piece of Book of the New Sun ephemera. I was utterly ecstatic to see that Seabolt was the editor & the author was in fact Michael Andre-Driussi, author of the Lexicon Urthus & The Wizard Knight Companion, both hefty pieces of Gene Wolfe scholarship. Andre-Driussi is no slouch, & so this was doubly wonderful to me-- both as an role-playing nerd & as a Wolfe nerd. Because a campaign setting attempts to lay out a world in its entirety, this is actually an excellent resource for those interested in The Book of the New Sun. It lays out information on the post-historic ages of Urth, from Myth to Monarch, Autarch to...Ushas or Ragnarok. In terms of system-- well, I admire GURPS in theory, for trying to hold up a high enough tent pole, but I ultimately consider it a failure. It doesn't get in the way of Andre-Driussi; if anything the craziness that is commonplace in GURPS aids him, as he is able to talk about the animal men bred by the Xanthoderms (Chinese) star-empire in terms of...character building. His thesis in the "Religion" section-- that the characters of Doctor Talos' play "Eschatology & Genesis" combined in different ways make up the history of Urth's cycles-- is just great worldbuilding, a post-hoc collaboration between him & Mister Wolfe. I quibble with the issue of the existence of the "Thaumaturgy" chapter-- he mentions in a marginal note in the "Characters" chapter that magic doesn't really factor in to The Book of the New Sun, & notes that you may want to call it magic only to deceive your Players-- but I'm not entirely sold. Still-- I thought I was buying a charming Gene Wolfe footnote & ended up with a splendid bit of exegesis. A total win.
Collapse