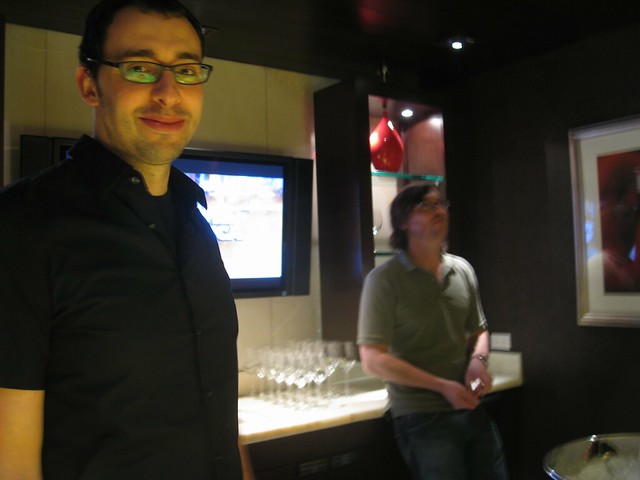 I've spent most of the time in Vegas working. I don't mean "oh, I worked," but rather literally, most of the time, almost all the time, except yesterday. I'd wake up early-- still on the Metropolis clock-- & go to the gym, do an hour down there, & then from seven-thirty till about nine-thirty, I was on the job! & would collapse into bed shortly after nine-thirty, for the aforementioned time zone reasons. Mostly this Vegas trip has been about me re-arranging people's schedules, or switching signage, or calling the concierge to argue with them about something. I've been to Vegas before, & I'm certainly not missing the cliche end of it-- my pithy homily on Vegas is "like Nashville meets Los Angeles." We-- that is, the company-- rented a huge suite to use as our hospitality location between meetings, which I can only summarize as "Bret Michaels." The hot tub opens directly onto the bedroom, for instance, & there are two (two!) bidets. Or, well, really they are Japanese toilets with remote controls & all kinds of options & settings. Anyhow, Sunday we got in, & boom, time to make the doughnuts. Then Monday was a nice long day, culminating in a fairly sizable gathering in the hospitality suite. Jenny came down & I introduced her around & before you know it the exhaustion rained down like steel droplets. All these...moments...will be lost...like...tears, in....rain. Tuesday I didn't even pretend; the CEO spoke & by the time he was done, I was resigned to heading straight to the Lands of Slumber. The gym in the morning started out really strong-- Monday morning it was packed with people from our company, but by Wednesday morning it was me, the CEO & one of the executives. Shine on you crazy diamonds. Wednesday was a half-day, so...phew. Wednesday meant I got to have some kind of a day, a life, a rest. The morning was full of meetings, & them I had to shepherd people to their various day-trip activities, but when I was done with that I was free & clear. It was overcast, which is fine by me-- my body is the fish-belly white of a nebbish book professional! Some of the girls from special markets were in a hot tub, so I got in & talked with them for a bit. They are very cliquish, all wolf pack, so it was nice to bust in to chit-chat. 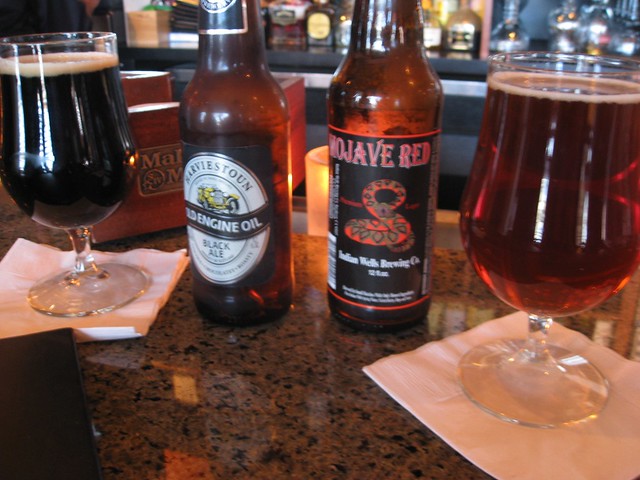 Our plan for the evening was to go get dinner at a place Jenny had researched, Rosemary's. What a strange, wonderful place. Definitely the best restaurant in a strip mall I've ever been to! Also, they had a "lady's night?" So Jenny ate for half price. Las Vegas is an odd town; I totally am willing to accept that the "good" places in Vegas are all scattered about in assuming locations like strip malls, while the glitz of the main drag is all flash & no substance. At Rosemary's, I started with Harvistoun Old Engine Oil, a thick dark Scottish beer that I can't remember if I've had it before? I know I've had the Harvistoun Ola Dubh & hadn't been all that knocked out by it-- or rather, it hadn't lived up to the expectations that I had for it. Anyhow, for dinner we got the chef's tasting menu with the beer pairings-- a well cultivated beer list was a big part of why Jenny chose this place. Our first course was baby arugula in Meyer lemon vinaigrette with sliced salmon gravlax, shaved red onion, fried capers & braised leek cream, & the beer matched with it was a Belgian, Tripel Karmeliet. The second course was the star of the menu, if you ask me-- fried veal sweetbreads with foie gras butternut squash quinoa & bloody mary butter sauce. Oh, heck yeah, glands. The beer was Indian Wells Mojave Red-- take note of Indian Wells, because they have a nice output. I'm normally "over" reds, but I liked this. Course three was seared pompano with parsnip & potato puree, crispy proscuitto, parsnip strips & an apple cide beurre blanc. That came with Unibroue Ephemere Apple, which knocked our socks off. It is a really apple-tasting beer, & reminded us of our dear Professor Fritz Briem Grut. We kept bugging our server to tell us more about it & making him run back to their beer sommelier. The main course-- oof, I was stuffed by the time it came-- was roasted rack of lamb with swiss chard, caramelized red onions & garlic reduction. It came with the Devastator Doppelbock which was lighter in colour than I expected but had the requisite punch. Desert was chocolate cream pie, crème brûlée, & a Framboise Lambic ice cream float. It came with another Indian Wells-- the Indian Wells Orange Blossom Amber which was a great dessert beer. The crème brûlée? Awesome. All in all a very lovely place. We closed the evening out by going to the hospitality suite back here at the resort. Matt was there, & he & I played pool with a couple of the international sales people; there were five of us in all, & they teased me when I called the hotel to have them bring in olives for martinis. Then Jenny & I came back to our room & looked out the window at Vegas for a while before going to bed. 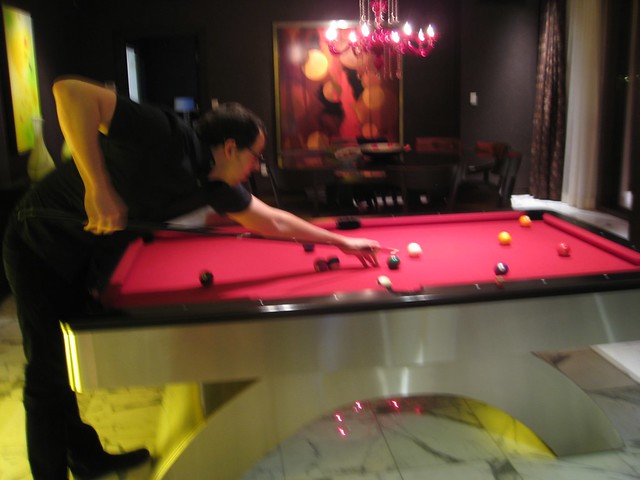