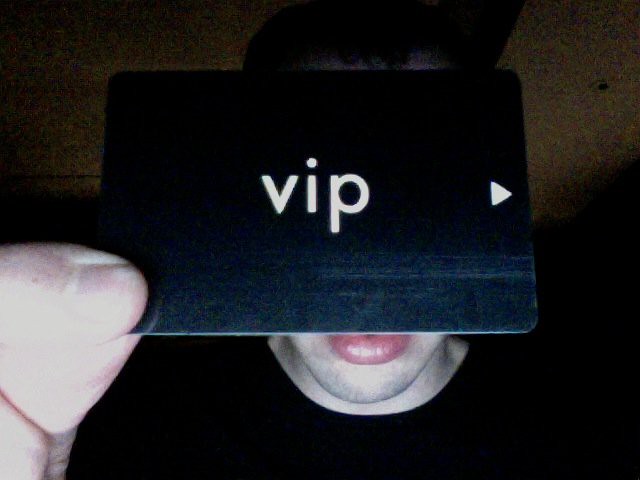 I wanted to take a picture of the guy holding the "KNODE" sign at the airport, but no dice. Here we are in Vegas; at the Red Rock resort. Right now I'm just waiting for the gym to open so I can get in a morning workout with Matt. Let's see, let's see, the usual questions...how was the flight? It was fine, just fine-- a little turbulent, but no worries. I finished the book I was reading & then I won a game of Settlers of Catan & then here were were. I got to work pretty much immediately, & due to the zone change, dinner was at about ten o' clock New York time, so we were pretty wiped out. We went to a place called Yard House where the food was pretty decent. A grilled artichoke, some seared ahi sashimi, & then porcini crusted halibut on bok choy, asparagus & mashed potatoes. Sure, the fish was slathered in sauce, but the sauce was good, you know? That is Americana! I drank a glass of Trois Pistoles, a Canadian Belgian ale that was pretty good, & a Goose Island Mathilda, which I had because-- well, since I remembered that they were bought I figured I might as well enjoy the last dregs of their indie production. Speaking of Beer Table, I should note that when we were there some women next to us were talking about how their husband & boyfriend are both Dungeons & Dragons nerds, & did people still do that? I interrupted & assured them that yes, yes we did. One asked Jenny & I "am I a bad wife for not caring?" & I laughed & laughed & Jenny said "no." After dinner here, it was back home & bed, dreaming of a fictional daughter. Well, I was her mother. Well, I wasn't her real mother-- a feral woman was, who lurked around our home like a protective wolf & knew her daughter as she aged-- but I was her mother anyhow.
Collapse