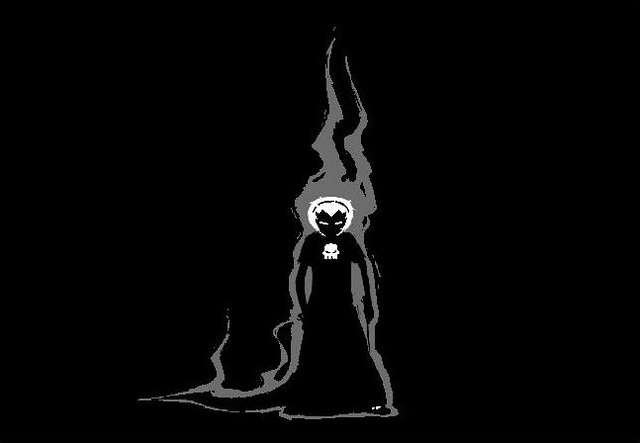 My sword is heavy & my brown is damp with golden chrism, back a mess of aches like cracked porcelain. Alive in America! After lunch with Marie & Eliot yesterday, I finished up my work week-- it was a pretty quiet Friday, & all I had on my agenda was to get my stuff in order for Vegas next week. I'm going to Las Vegas for a conference, & Jenny is coming along for a vacation-- I guess I haven't mentioned that. Friday night was Sam's birthday, though, so I trundled on over to The Way Station to meet up with the crew. The bar ended up being further away than I thought-- I figured it was close to Kira & Nino's apartment, or at least the same sort of distance away, but it was in fact a decent stone's throw farther. No worries, though-- the weather had been a mess all day but had cleared up by the time I headed out. I utterly failed in the "dressing steampunk" category though; I totally forgot. I figured I'd toss on a vest, maybe the tie that

wolvus got for me with the alchemical symbols on it, but it slipped my mind. A shame, because a decent chunk of the people who showed up did dress appropriately. I hate not being a sport! Way Station was cute-- if you don't know about it, it has vaguely steampunk décor & a TARDIS bathroom, as well as a list of Doctor Who themed cocktails. The bartenders were friendly, but it is worth noting that they only have one beer on tap at a time-- a hand pumped keg! I don't know if that will change-- I assume that if they are successful that it will-- but it gave me an excuse to order a martini. It wasn't served straight up, but in a lowball, though I'm not complaining--

toughlad's whiskey was served in a little tea cup, too. Ecclectic, to say the least, but kind of charming & homey. I haven't seen some of the acquaintances of mine there in a while-- Bill, Phillipe, those folks-- but ended up spending most of the evening with James, Tracey & Alexei. Ordered food from Plan B-- that is a weird name for a restaurant, right? Tracey & I split a French dip & a cheese steak. Came on home, & was glad for the walk. Fresh air! This morning hasn't been more of anything-- watched an episode of Batman: The Brave & the Bold that featured Scooby-Doo & Weird Al Yankovic as the special guests, so that was cute. Otherwise, today I have to pack & go to the gym.

Maybe you aren't familiar with the Bottle City of Kandor. Kandor is a tiny little piece of the Superman puzzle-- an entire city of Kryptonians, shrunk to miniature size by Brainiac, who was collecting representative pieces of the universe, before he destroys it. Got it? Superman of course wins the day-- there is always a way-- & takes the bottled city home to the Fortress of Solitude. He can't quite figure out how to restore the people to full size, but he's always working on it. What is this book? LA artist Mike Kelley-- maybe you've seen his stitched together dolls-- made a whole bunch of different Bottle Cities of Kandor, inspired by the fact that there has never been a standardized representation. Sounds pretty neat, right? It is pretty neat! The Kandor that I called "Donner Kandor" & Mister Kelley calls "Kandor 17" is one of my absolute favorites-- towering crystal spires & sci-fi console base (35-37). "Kandor 3" also has a lot of oomph to it-- the granularity of the sculpture makes it look something like the ruins of Kandor, a city after some microscopic apocalypse (9-11). Reading about the production-- building those giant bell jars was not easy!-- was very fascinating, as was Kelley's original plans for internet involvement, an aspect that never came together. Kelley admits to not being "invested in the Superman mythos," which is a shame, but rather approached the topic from a sort of retro-futurist perspective, which is a noble goal (53). This is a gorgeous product, & if I had one complaint, it is that I wish that the transformed comic panels had their origins cited. For someone who isn't a fan, Mike Kelley really "gets" the visual aspects; these really are just stunning. 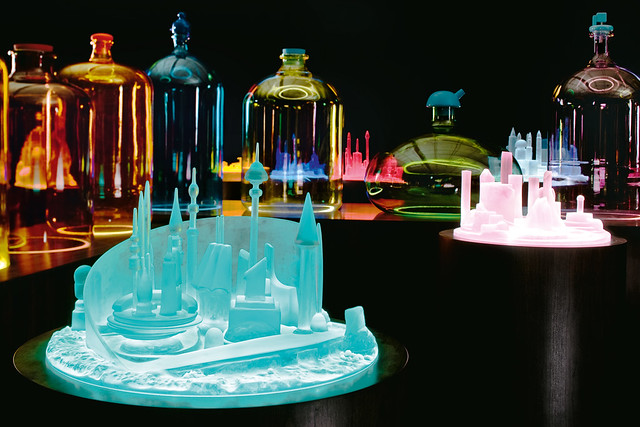 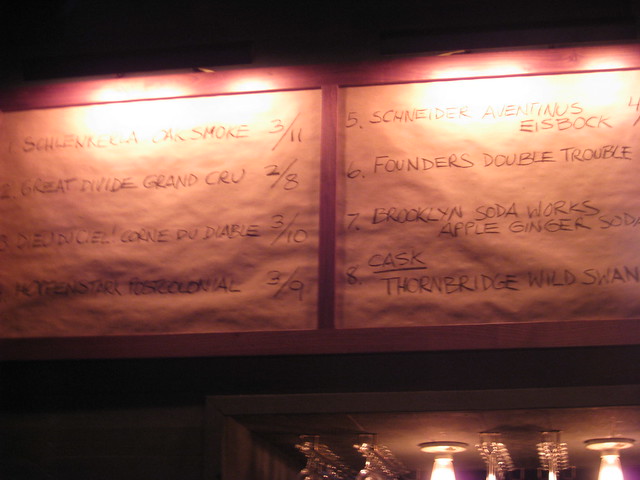 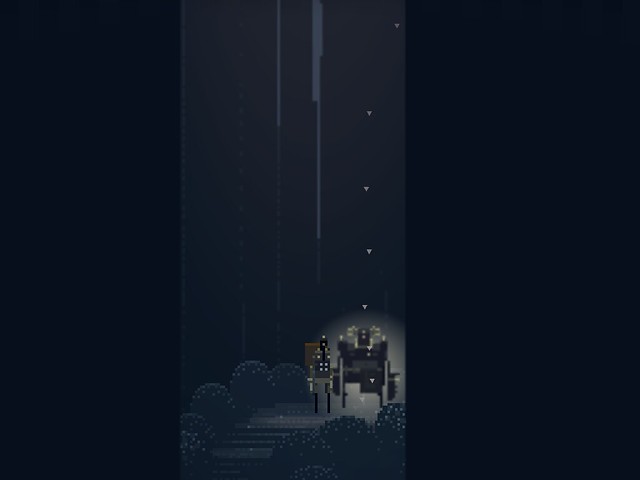 After we ate breakfast, I sort of wandered about in a haze, playing video games here & there. I played some GoldenEye, but the host kept quitting, so I stopped that. I realized it was a new moon, which meant that the dark moon reigned in Superbrothers: Sword & Sworcery EP, so I got on there & got down to business. You know what? I didn't fight the Grizzled Boor-- I wonder if I screwed things up by not getting my bloodlust on. I don't want to miss the One Eyed Jack's concert! Anyhow, I got the Dark Moon Trigon, go me. After that I finished my book & then Jenny & I went to the gym. I don't know if I'm going to be lounging by the pool on this trip, but you know. Always an option. I am hoping that when I wake up too early, on account of the time zones, I will use the morning to hit the Red Rock gym. That is my plan anyway. We came home & I was killing time when I realized that Beer Table's twitter was listing a number of appealing beers. I mentioned that I wished I could go, & Jenny wisely pointed out that, well, we were adults, & we could go if we wanted. Oh yeah! Being a grown up is awesome, I forgot! & so like that, we were off! We split a flight of their draughts-- so, let me rattle them off real quick: Shelenkerla Oak Smoke, which is the only one they make that isn't smoked with beech, Great Divide Grand Cru, which was an ass-kicking beer & one of the top two, Dieduciel! Corne Du Diable, which is from Montreal but I liked it anyway, Hopfenstarr Postcolonial, which was also from Montreal & had a great name but was just so-so, Schneider Aventinus Eisbock which was awesome & smelled like sushi & was the other favorite, Founders Double Trouble which smelled like marijuana & made me think of all those other IPAs that smelled like pot at Beers for Beasts, & Thornbridge Wild Swan, which was a really, really delicate cask...lager? Nuts. As I've said before, I think domestic beers have ruined lagers for me. We also had a Brooklyn Soda Works Apple Ginger soda in the mix, which was a nice palate cleanser. I also...splurged. There was an expensive bottle I'd been eyeballing-- the Goose Island Bourbon County Rare, which...well, you know how much I like the regular Bourbon County Stout from them, right? I would have let it pass me by, except the guy working there reminded me that Anheuser-Busch bought them; end of an era, huh? So we shelled out the fifty bucks & brought it home. Call it an early birthday present? Then Jenny made dinner-- salmon & arugula-- & watched an episode of Archer. Now...now I'm stuck in that netherworld of trying to remember what I forgot to pack. 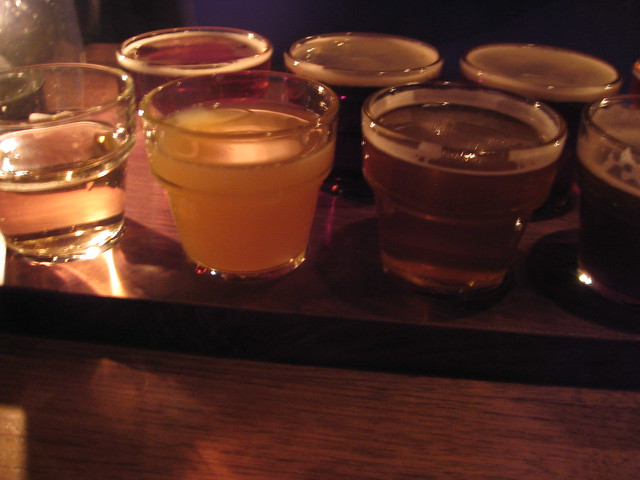