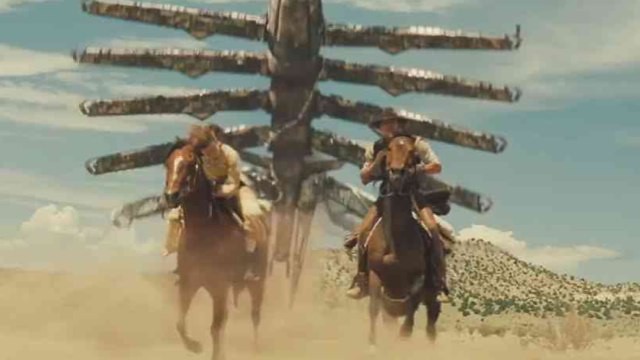 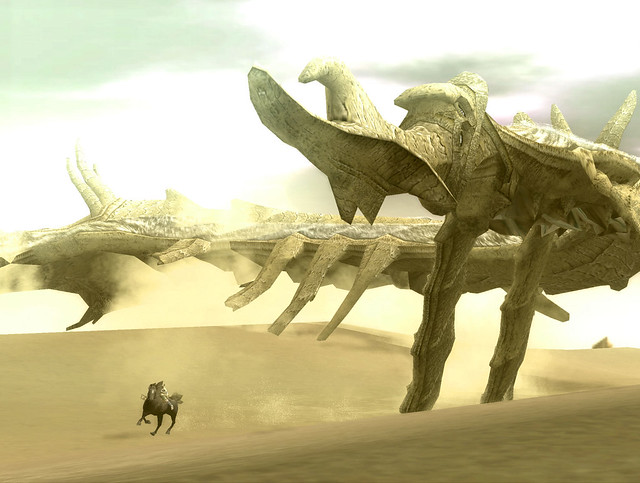 Doesn't this still from Cowboys Versus Aliens look like it could be a still from a Shadow of the Colossus movie? I mean-- it would be a terrible movie, since there would be characters, & a Shadow of the Colossus movie shouldn't have any characters-- Just Wander, Argo, a dead Mono, & the voice of Dormin. Alright, fine, Emon can show up at the end, but you know what I mean. Still, it looks like two guys fighting Phalanx, the thirteenth colossi, doesn't it? Maybe that is just the way my version of pareidolia works-- I see Shadow of the Colossus & ICO everywhere! Let's get down to brass tacks, shall we? Yesterday. Alright, yesterday, nothing much went on. I came home, killed some time, & then went to the gym, where Jenny later met me. I put in an hour & a half, so...good for me, I guess. I didn't really do anything in particular; no target areas or anything. Just kept chipping away at the glacier with my black blade of disaster. Then I trundled home, after picking up some hot wings, & Jenny & I watched another episode of Castle. It was a courtroom drama case, & it led to the show taking itself a little bit too seriously as a procedural. Like-- real, court clerk, you are shocked to find out that jury tampering is a serious offense? & really, cops, you are just going to ignore her jury tampering? Pull the other one. That sums it up, really. I sort of had in my head a list of things I would do at home: what I would read, what I'd straighten up, all that jazz, but it was too late. I looked up at the clock & it was bedtime, just like that, all of a sudden. Today my stomach has been troubling me-- rumble grumble-- but Marie took me to a nice lunch so it could calm down. She took me out to Balthazar, which I'd never been to before, & brought Eliot too! I ate calf's lever with onions, bacon & mashed potatoes. It was...fine? Not amazing, just fine. Check that box off! Eliot was fun; Marie & I made a game of hiding his toy lion, passing him back & forth under the table & setting him up when Eliot wasn't looking. Cute. We stopped by Scholastic so Eliot could ride the Clifford the Big Red Dog machine, & then parted ways.

A unique blazer,
pennyfarthing badged, said "6."
Laughed. "Be seing you."

So, this exists, huh? That is just about all I have to say about it. It is apparently an "authorized sequel," but that doesn't count for much in my book. Apparently Patrick McGoohan "didn't hate" the comic, which is fine-- I don't hate it either-- but again, that doesn't count for much. The Prisoner was an amazing work of television-- it is in my top five, right along side Twin Peaks-- & trying to create a sequel decades later...well, is a fool's errand. You can't capture lightning in a bottle twice. Notably, it takes the ultimate psychadelic finale, "Fall Out," & dismisses it as a drug induced piece of theater. Nope. Let me stop you right there-- no. Too easy by half. You don't get to take the challenging bit of a story & just drop it because you feel like it. "Oh, my, this is confusing & problematic, best just ignore it" is missing the whole point of The Prisoner. It is like...writing a comic book sequel to Twin Peaks & saying "oh, Cooper had dementia, all those weird dreams were just too...weird." Come on, really? No, no thank you. It wasn't bad, mind you-- it would have made an alright episode of The Prisoner, maybe-- but because it came after the fact, it just couldn't pass muster. In the end analysis, it reads like what it was-- a comic of its period. It was publishing in 1988, five years before the Vertigo imprint, but the patina is unmistakably there. & speaking of pareidolia...I grabbed a copy of Locus with Patrick Rothfuss on the cover, since

suenoverde has been going on & on about him, singing his praises. I read this story in the form of individual issues, & when I set them down to flip through them before writing this, I couldn't help but notice the uncanny similarity between Number Two & Rothfuss...isn't that uncanny... 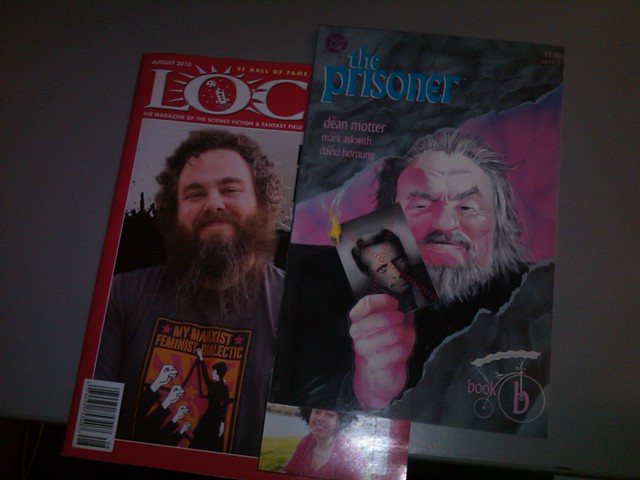