Then came the Black Bull;
glittering, like Finglofin,
stood the Unicorn.

I'll give you a glimpse into the future: this book is going to end up in my Best of 2011 list when the year comes to a close. The only Peter S. Beagle I'd read before was his collaboration with Lisa Snellings, Strange Roads, but I had a great fondness for the movie, so I expected this to be fun. I thought it would be a neat little piece of faerie tale writing, & I'd check it off my list of "classics" & then move on. Instead, I found out that it is amazing. As in, it put me in a maze where I can only think about unicorns. First, let me say this: Peter S. Beagle gets unicorns. From page one you know this, from casual mentions of dragonslaying & the healing of Fisher Kings. She is the opaline moon & stars, cold & gorgeous; she is monomaniacal grace, baleful purity; she is not kind nor is she cruel. She simply is, herself, a heartbreaking cliff for lovers to jump from. She is beauty made terrible. Now-- I'm a very wicked creature, a fat black spider, the Goblin King, exiled angel. I'm an awful piece of work, with a collection of unicorn skulls I used to practice phrenology. I'm like the harpy in the tale; knives & hate & laughter. I'm not like Haggard, however. In Changeling: The Dreaming there was the Seelie & the Unseelie...& then there was the Dauntain, the broken. Haggard is the latter; he's hunted his heart's desire & still come up bitter. The fact that Beagle manages to make him a compelling character is nothing short of astonishing. The arc of the novel is as much a commentary on the Monomyth as anything-- one long critique of princes & wizards-- but despite that, Beagle flushes out Lír & Schmendrick, gives them bones & wants & breaks their hearts & puts all the pieces back together again. That said, The Last Unicorn soars the closer you get your face to the text. The poet butterfly, the little details about Amalthea's fingers being the same length, her eyes being too wide, the "helpme" cry of the gulls-- each sentence is a grain of sand, growing nacreous in your mind as you read onward. 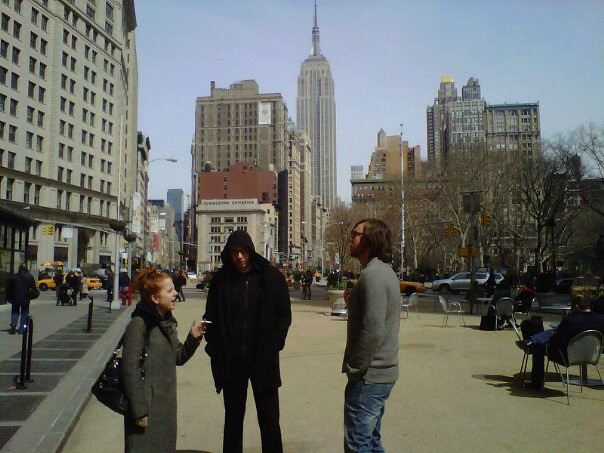 I am super hungry, as I sit here waiting for Kat to come down & pick me up to go rustle up some grub. Funny, the same situation happened yesterday! I've been pretty good about getting salads for lunch; of course, when I go on lunch dates that goes out the window somewhat, but that isn't my concern. I'm just trying to built a better default, create superior habits. Exceptions don't concern me. Alright-- through the miracle of the written word, I've gone to pick up a salad & I have returned. Recorded language-- it sure is crazy. Just like time travel. Yesterday was...nothing much! I thought we were going to the gym, but Jenny called it off. That was no problem for me, since I'd gone the day before, but it does mean that we'll have to go tonight! Instead, we ordered a whole mess of sushi from Mura & stayed in. Mura has good sushi, & is really close to us...so why do we hardly ever go there or order from there? A mystery. While we ate we watched Castle, which was a soap opera spoof with Corbin Bernsen as a guest star. I have a hatefondness for Corbin Bernsen since he was a psychopath contestant on Celebrity Mole-- both seasons! Checking my email, I saw something neat: Caroline offered to write a few sentences to anyone who would provide her the name of a new colour & three random words, so I gave her Sapoil & the words "Rickshaw, Dandelion, & Maw." She came up with: "would that i were a dandy riding to the torture garden a rickshaw. catherine deneuve drops dandelions one by one into her delicately gaping maw while giving me the side-eye, the interior of each iris riddled with tendrils of sapoil and violet." After that, I just played around on Sword & Sworcery some more; I'm playing through it au naturel this time, along with the real phases of the moon, & along the way I'm taking a bunch of screenshots, because that is how I roll. 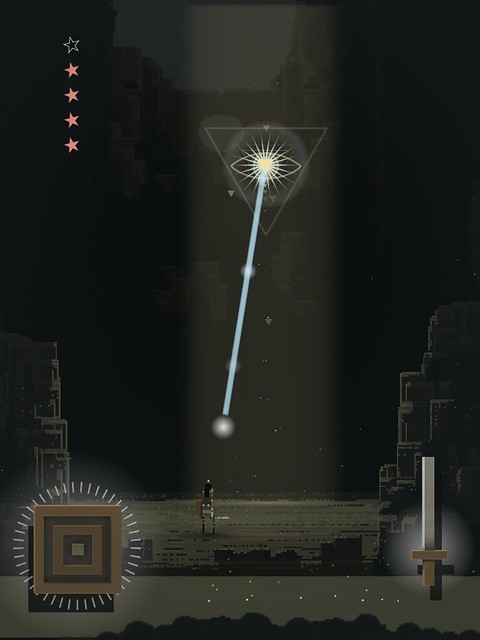 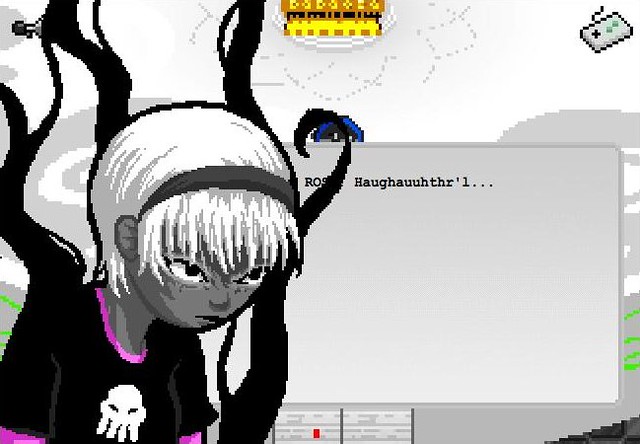 We must have been eleven years old in my dream; stuck in the nebulous forever-childhood of our tweens. There were three of us, having a slumber party at the home of another kid. What was the joke? To turn off all the lights & say Candyman over & over? The thing is, you can't have little warlock nephilim Mordicai sitting around without the occasional supernatural consequence. The television came on-- only there wasn't a tv in the room. Instead, the wall flickered like cathode ray tubes were embedded, behind the wallpaper, showing snow, static in glistening black & white. The light filtered through the paper showed that we weren't alone in the room-- someone was there with us, all dressed in bondage gear-- "Pinhead!" shouted one of the other kids, & Hellraiser cenobite sounds about right. The television exploded, sparks igniting the wall, & we rushed around putting it out with a fire extinguisher. The boy who was hosting the party said it was his older brother, dressed up in his "parent's stuff," but I knew better. Shamanism can happen on accident, you know. Later I stayed up late, long after the other kids had fallen asleep, talking to his mother about her fetishes, innocently. You could feel the gate to hell, still open, lurking behind the glass of the televisions, the mirrors, the windows. Later, I was in a classroom-- older now, as old as the current Mordicai ought to be, thirty something. I was sitting at a desk, a classroom desk, hanging out with my high school crush. She & I were doing the usual catching up stuff, but rather than being interminable small talk, it was going really well. We both had things that were worth saying to one another; how rare is that? This part of the dream went on for a while-- just vague positive social memories, I guess. Weird. I wanted my old flame to meet Jenny, so I went to go find her. Jenny was taking a shower, locked in the attic bathroom of some decrepit old mansion, so I shimmied up the drainage pipe, jimmied the window open (steam billowing out), crawled into the room & then slipped into the shower with Jenny. Nothing sexual went on, we just took a shower together, & then I woke up.
Collapse