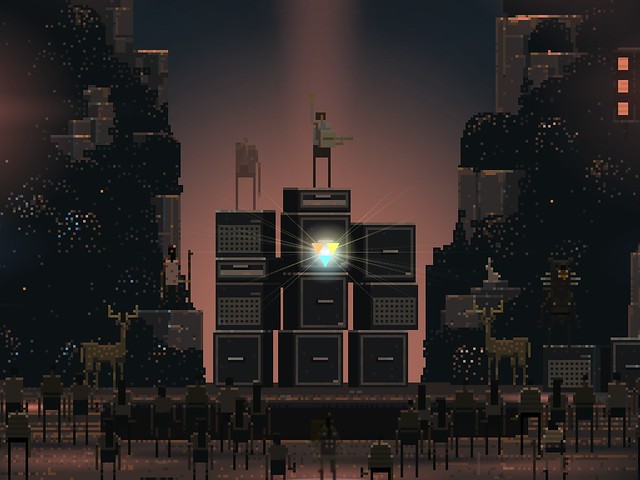 (Jim Guthrie in concert in Superbrothers: Sword & Sworcery EP, as shown by the Gizzled Boar.)

What with seeing Godspeed You! Black Emperor just a few weeks ago, & last night's Mountain Goats show, I've been hitting up my top five list pretty hard the last month. If I had gone to the Protomen show the other week instead of Olivia's baptism, I'd be three out of four-- I only have four of my top five slots filled, for now. Let me rewind for a bit! It was Marie's idea to go see The Mountain Goats together, me & Jenny & her, but due to work & illness & such, Marie had to back out. Very sad! I managed to get lunch with her at Rye House, however, so we could do the hand-off for the tickets & at least see each other for a bit. Hello, Marie! We did find a nice warm body to fill Marie's shoes-- the lovely Rachel. I've been saying I want to start scheduling more time with Rachel & Nick, & suiting thought to action, invited her to come along. An invitation she thoughtfully returned by buying me drinks. We got to the venue early-- Jenny grumbling that it was so very early, but so be it!-- & had a while to chat before the opening act came on. The wonderfully named Megafaun kicked things off, & were really charming. Their opening number had their front man charging the front of the stage with serial killer eyes, accompanied by hard rocking banjo plucking. Right on! At the climax they-- killed all the amps & played it acoustic? I don't think I've ever seen that before & it was great. Megafaun's stage banter was just weird & delightful-- stream of consciousness ramblings about North Carolina, Mountain Goats fans, how excited they were to be there, just all kinds of fun. & I'm pretty sure that one of them had Ars Goetia tattoos like Edbury. Also, I really liked the cut of his pants, which is a weird thing to be obsessing about in the middle of a rock & roll show. If pressed, I'd describe Megafaun as "Seven Brides for Seven Brothers meets Buddy Holly," or perhaps "Chuck Berry crossed with O Brother Where Art Thou?"

I haven't been to The Bowery Ballroom since the last Mountain Goats show I saw, back in 2006. That was with

familywolf & I was missing her acutely during the course of the show. That was a weird scene, too; we'd seen The Mountain Goats just a few days earlier with

ranai, at a crazy Euro Dance Club-- they forced them off the stage at like eleven o' clock & then turned on the lasers & the fog machine & bad electronica. This was when they were touring for Get Lonely so it was all a slurry of sad, sad songs. I was excited to see the new show, since we had gotten out of the valley of the shadow of death, you know? The crowd was...very mixed. I feel like I know a decent number of Mountain Goats songs by heart-- maybe I know ones from the early years? Or maybe I know weird ones?-- I don't know, but I didn't know the words to too many of the numbers. That isn't a complaint; especially with the huge & schizophrenic discography of The Mountain Goats, it is to be expected, though there were plenty of diehard fans who were mouthing everything. Actually, I guess the girl behind Jenny was really annoying, since she was shrieking every lyric. Whatever, I read his book about Black Sabbath! For all the hardcore fans in attendance, there were plenty of dilettantes, too-- who yells for the band to play the hit? So gross. I mean-- it isn't that I don't want to hear "No Children," & when the did play it everyone was happy, but just don't be that person, you know? I was kind of hoping for "Against Pollution" or "Lovecraft in Brooklyn," but no dice. It was a fun show, with a lot of surprises. JD played "Dilaudid," which I definitely didn't expect, & the arrangement for "Going to Georgia" was really grandiose, too. Someone came out to sing "This Year" with him, & I'm not ashamed to admit that I don't know who the dude from The Hold Steady is by sight! He was pretty great though; everyone was having a lot of fun up on stage, which reflected down onto the audience. The Brooklyn Vegan has a lot of great photographs of the event & the set list, & NYC Taper has the recording of the show (thanks

toughlad!); yeah, it was as much fun as it looks. One of the great things about growing up is that you realize that the spastic geeks are the cool guys. A rousing success all around.

βehemoth awoke,
& the Generals followed
the Mermaid of Death.

This is the sequel to Starfish, & it continues its litany of bleak nihilistic drama. Who are you supposed to root for-- the protagonist from Starfish, winding her way across North America while dooming the entire biosphere? The serial killer secret agent from the bottom of the sea, who squirms through global security until he ends up tasked with eliminating Patient Zero? Naw; I'm rooting for Achillies Desjardins, the 'lawbreaker. As in, the laws of thermodynamics. Really, those guys are the keys to the novel, for me-- a fringe group empowered with an enormous latitude, chemically bound to the greater good. They are the shining jewel of the book, as well as their biggest flaw. The Guilt Trip-- the biochemical leash that keeps the 'lawbreakers from acting against the greater good, causing them to have seizures whenever their guilt response flips-- never really pays off in consequences. It is Checkov's Gun...but it only fires blanks. & while the banal arguments about free will are trotted out, it isn't until the very end that there is a discussion of how the guilt response might be a terrible mechanism to base an ethics code on...&, relatedly, how blocking the guilt response might have long range consequences. Lenie-- the protagonist of Starfish & one of the leads in Maelstrom-- continues the "well isn't this fucked up?" thread. As the willing disease vector, she plays the role of a Black Widow Typhoid Mary all the while menacing any fathers with daughters she might come across. It ain't pretty, but it isn't meant to be. The eponymous Maelstrom is the internet, the grid, the matrix-- the computer system out of control with viruses that have evolved into a full suite of online wildlife. I'm not sure I buy it-- I know I don't buy βehemoth-- but that is the point of fiction, so I'm not complaining. The sequels to this are out of print, so I might have to grub around online to find them-- & I will, because the story is compelling & I want to see what coconuts Watts shakes out of the tree next. It isn't as brilliant as Blindsight, but it is darn good reading, once you get your head into the right pessimistic space.
Collapse