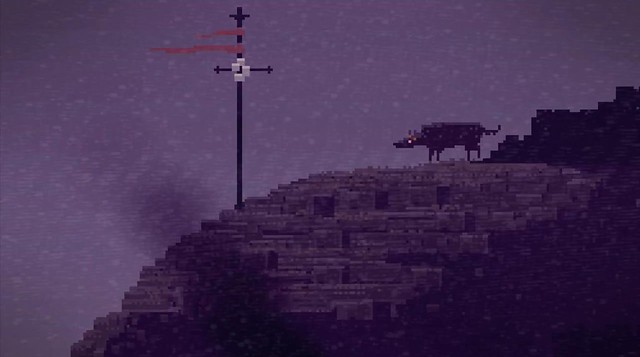 I beat Superbrothers: Sword & Sworcery EP this morning, & boy oh boy, was that the best five bucks I've spent? It maybe is. When I saw mythopoeic, I'm not being hyperbolic. The biggest visual references are obviously The Legend of Zelda & The Shadow of the Colossus, & if that is your pedigree...well, you've got a lot to live up to. Sword & Sworcery does, hardcore. The tone of the text is very casual, laced with lingo & references-- you meet a giant who commands obedience, & has assembled a posse, for instance. Yeah, Andre the Giant is in the game, what of it? Like Mario Brothers, you inject mushrooms for healing...& for the pharmacological edge they give you. If you are having a hard time finding mushrooms, don't worry-- there is plenty of them in the dreamworld. & when you switch to the hypnagogic reality, you might want to take note of the phases of the moon-- because the dream world alters according to the moods of that silver orb. To play fair, you should wait a full lunar month-- from full moon to new moon-- in order to access all the bits & pieces you need to. Or you could listen to the cheating cheater, the ghost who tips you off to messing with your iPad's setting. Maybe you have the key to the moon grotto-- that is another path to Time Paradox. Either way, you'll mostly be chasing after the bobbleheaded kodama, in the vein of Princess Mononoke. The game strikes such a fundamental chord in storytelling that it is in no way strange for a man with a cigar & a business suit to aid you on your quest, of for The Scythian to attend a rock concert in the vein of One Eyed Jacks where the girl with black hair whispers "fire walk with me." & it is the little touches-- like my beloved Yorda from ICO, none of the non-player characters are a hassle. Logfella is laconic, Girl is wistful, & their pet, Dogfella, is really a boon. They are all there for you-- for us, as the game uses the plural to encompass both the character & the player-- as The Scythians encounters with sworcery, the Megatome, & the Trigon all take their toll. The music interweaves with the whole-- in fact, literally in the case of a few battle sequences. I'm an enthusiastic fan; this is what computer games should be.

That was a nice chunk of last night; I bought groceries & Jenny made salmon & salad, first, though. We watched Parks & Recreation, & it cracked me up. I'm a sucker for a bad pun, & the condiment jokes were flying fast & loose, then followed by a Sky Mall slamdunk. After that, I parted ways from Jenny; cracked a beer & retreated into Spare Oom. The beverage was Samuel Smith's Imperial Stout, which was a tasty brew but not evil enough for me. I want my stout to taste like ash, like peat & doom. Then I pulled up the 'pad & quested for-- & claimed-- the Bright Moon Trigon, for glory & for spite. Yes, yes indeed. This morning was the quest to tame the Dark Moon Trigon, which I did, & deal with The Gogolithic Mass, which I (we) also handled. Friends forever. I took a break in-between the triangle of doom & the undead spectre & watched Batman: The Brave & the Bold. Finally, the Batman & Superman team-up! Which...was largely a combination of Silver Age retrospectives &...Frank Miller? If you can jam those two things together, you know you're doing something right. I wasn't all that impressed with the casting for Superman, but I did like that they went with the "clumsy ox" Clark-- the corn-fed farmboy who is just too big for the city. A lunk. The touches, the flourishes, are what made the episode work-- jokes about Silver Age Lois' marriage schemes (those never happened!) & Olson's many transformations, that kind of thing. It was subtle, too; giving Lex Luthor the Supercar, that sort of thing. A nice little caesura in the midst of being immersed in Sword & Sworcery. Now I've got to shake off my lethargy & hit the gym.
Collapse