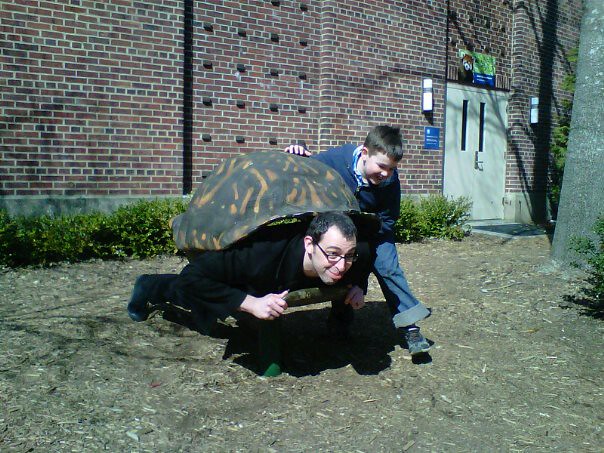 Last night I woke up from a bad dream into night paralysis-- just stuck there, unable to move. The silliest part was that my brain was telling me "you need to tweet about Bat-ham. The Hog Crusader. Watch out, Peter Porker!" Thanks brain, thanks for nothing. Other than that-- nothing. It is snowing today, which is cracking me up. Sadly, I have a crappy umbrella. I used to have the best crappy umbrella. You know, one of those cheap two dollar ones, but for some reason...it was great. It must have been the first one on the factory line that morning, because everything about it worked. It was fantastic, but was destroyed by the 2010 tornado. RIP, umbrella. Ella. Ella. I...I don't know, I don't have anything to report. Jenny & I haven't even been watching any interesting television, actually. We watched a Tosh.0 with special guest Chris Brown. I'm pretty close to taking that out of DVR rotation-- as much as I like clip-shows, Daniel Tosh has just stopped being funny, & the program is fully bro rape culture racist anymore. Just another example of a comedian thinking they are "edgy" by...reinforcing the dominant paradigm. Yawn. We've also finally caught up on Glee-- none of my opinions on that show have changed even slightly. It is both good & terrible, & the only characters I care about are Brittany & Kurt. On the flip side, Kurt & Brittany are perfect. Otherwise, that is about it. I've been killing the television pretty early & reading, which is an a-okay way of spending time. I seriously have got nothin'. I went to the gym yesterday? I did lower weights, higher reps. Just to keep things fluid & mixed up. Same thing with Sunday; well, no. Sunday I put in a long haul & I did higher weight. I'm just saying-- given how lazy I was last week, I'm trying to make up for it this week. Blah blah blah. So very very.

Crawling on your skin,
like glass, or a million bugs,
is the Omega.

I've never read Strangers in Paradise. I realize that is probably a huge hole in my comic book knowitall armor, but there it is. Part & parcel with that is the fact that I have no preconceptions about Terry Moore-- one way or another. Is Echo totally different than the bulk of his work? Beats me. I do like it, though-- it is a story about people in an extraordinary situation, doing ordinary things. Our protagonist is a woman with real world problems-- a pending divorce, money issues, that sort of thing-- who finds herself showered with fragments of a nanomolecular super-soldier suit. Sure, it sounds silly when you say it out loud, but Echo never does. It deals with things straight faced while keeping a sense of humor, & it pays off by giving a vibe of verisimilitude. THe reflective paint on issue one helps, too-- I just like it, okay? The villain-- hold on, I should say the antagonist-- of the book is a super detective, a woman hot on heroes trail thanks to her super sleuthing. Here is the thing-- the antagonist makes a plausible case for having the heroe's best interests at heart, & I am not sure whether or not to believe her! That sense of mystery, that tension, hangs throughout the book-- taking a character at face value is likely to backfire. The pack of bikers-- good guys. Don't get preconceptions. & what is in the protagonist's secret box? What's in the booooox? I'm curious, I gotta tell you. Our heroine is paired with a sidekick, a park ranger, who has a mysterious connection to her. Well-- it isn't so mysterious to the reader, once you get a few issues in, any way. In tone & tenor? This reminds me a lot of Y: The Last Man. I liked it!
Collapse