The gels have spoken.
The βehemoth is coming,
up from the deep dark.

avatar_x recommended Starfish to me, saying: "[t]he central conceit: only people who are sociopaths would enjoy living on the bottom of the ocean." Well, that is partly right-- it isn't sociopaths, so much, as the damaged. Here is how I would summarize the premise: living at the bottom of the ocean is traumatic. The claustrophobia, the cybernetic enhancements required to function out in the water, the lack of circadian rhythms, the cramped quarters, the dark, the pressure-- it is enough to make you crazy. With that as a given, the authorities find people they call...pre-adapted. People who have had intense emotional traumas, & have learned to cope with them. They build a crew of abuse survivors, violent offenders, post-traumatic stress disorder sufferers & pedophiles, & send them down to scrounge around at the bottom of the sea. I'll tell you what I couldn't stop thinking: this would make an amazing, if deeply disturbing, Blue Planet campaign. In fact-- I only ever made one Blue Planet character, but the pitch was very similar. In a deepwater mining vessel, crawling along the sea bed, my character was the fix-it guy, & a Squid. Squids were the humans modified to have gills along their back; compare to Divers, who had lung modifications to let them hold their breath longer. I couldn't stop thinking about Blue Planet while I was reading this-- which speaks both to the game & to Starfish as successes. Both authors have a past as marine biologists, & the hard edge to their SF holds up.

That is the setting & characters Starfish offers up; the back of the book calls them "outcasts" but really, they are the damaged. In the futuristic setting, the planet is power hungry, & the geothermal stations are a big part of the economy-- meaning the crew of psychological victims & perverts have a job to do. They've been cut up, one lung replaced with a oxygen filter, free & open to the sea water, so they have no problems with the pressure-- once your other lung collapses, that is. They've got neural inhibitors to keep their brains from short-circuiting at the immense weight of water crushing down on them, & they've got eyecaps to amplify the ambient light. The eyecaps come off-- the are like glorified contact lenses-- but the crew of lunatics soon find themselves leaving them in, & keeping the lights off. The deep sea vent they are stationed at is home to freaks-- deep sea anglers meters & meters long, mammoth tube worms, enormous scuttling crustaceans. Something-- who can say what?-- makes the life along this particular crack grow enormous. Just a strange quirk! & the crew themselves begin to develop plenty of quirks all of their own. Sleeping outside is just the first step. You don't really start to change until you tweak your neural implants, until you let the synapses start firing faster & faster. Just don't take the inhibitors down too low, or you'll end up like Acton. & whatever you do, be careful not to end up like Fischer. 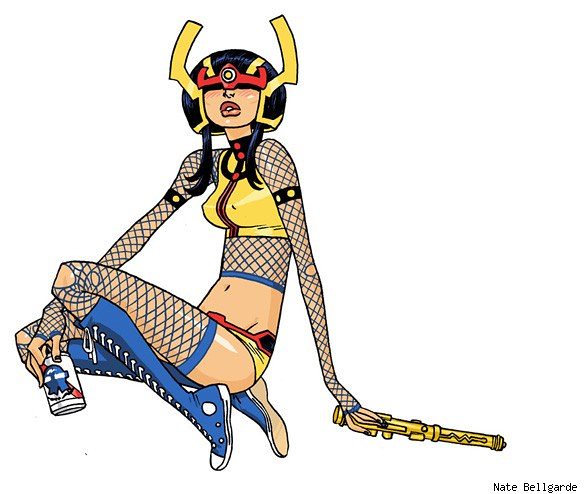