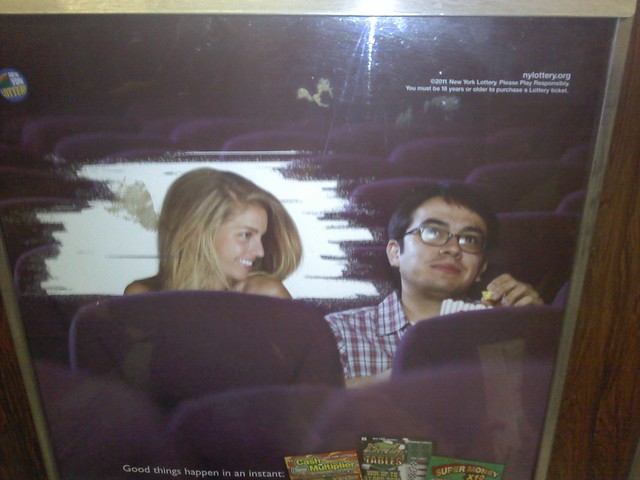 This New York Lottery advertisement really bugged me on the train today, in part because...well, in part because it is so unremarkable. The ad is for scratch-off tickets, & as you can see, there is a guy (a "regular joe" I guess) in the movie theater, while next to him the scene has been scratched away & there is...a hot woman! Yeah! With all the money you buy from the lottery, you can buy a really attractive lady! That is totally the way that it works, because women are objects, & men with money possess them! It is frustrating; the meta-textual "scratch-off" of the ad itself is fairly clever...but then it plays to the destructive misogynist cultural constructs. & it isn't even like the lottery is primarily marketed to men, or played exclusively or predominantly by men. This is just dumb. It bugged me, because...well, because there are so many other ads that have the same message. & I'm not against attractive women in advertisements, just...the gross power dynamics of winning & ownership associated with the ad genre. Anyhow, it got under my skin, so I got up & took a picture. The caption was "Good things happen in an instant," which isn't the grossest slogan, but this ad, yuck, blech. Do I have anything else to report? Not really. I got Rickshaw dumplings with Amber & Anne for lunch, which was nice-- we ate in the park. The first park lunch of the year, mark the date. Came home to Jenny & I guess was in a bad mood? Snapped out of it & went to the gym. Lots of cardio; I kind of got stuck watching Out of the Wild: Venezuela on the elliptical machine. Remember when Survivor used to be cool? Same thing. Came home & Jenny & I split a green beer & watched an episode of Fringe. Me: "I really hope that is a baby Observer!" & it was. 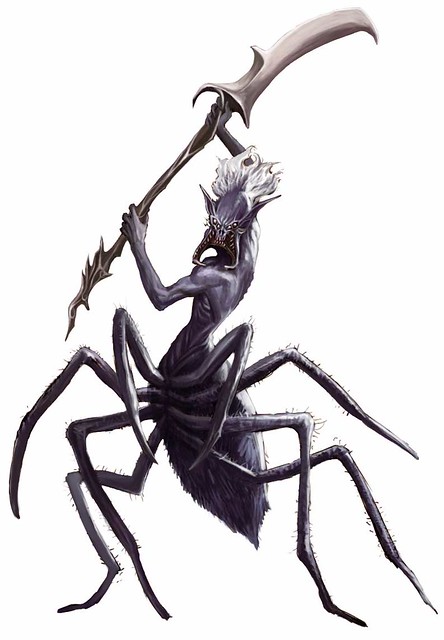 So here is the thing. In order to be a Drow-- a dark elf-- you need three things, as far as I'm concerned. You need to be a dark skinned elf, who lives underground, & who worships spiders. You can change one of the things-- but if you change two, then you aren't Drow any more. Drow cultists of the Elder Elemental Eye? Still living underground, still dark skinned elves. Xen'drik Drow, in Eberron? Live above ground & worship scorpions? Bzzt. No, now you are just black elves, guys-- though okay, "scorpion" is pretty close to "spider." Even someone like Drizzt-- who doesn't live underground or worship the Spider Queen-- it defined by his iconoclasm, right? So, same thing. These definitions are a little bit plastic, but I think it shows how important culture & environment are to defining a fantasy race. It is something I've been thinking about, spurred on by musing about Kingdom Strange. Something that has, in fact, always bugged me. Monoculture. "Dwarves are this way. They live underground, are great craftsmen, are greedy, & hate goblins & giants & dislike elves." "Elves are such & such a way. They love nature, & live in trees, & are good with bows. They hate orcs & dislike dwarves." It is something that I steer away from in Oubliette. I want every race to be just as diverse as humans. Humans, I should say, because in a world with fantasy races I think you need that capital letter. Similarly, I want every world to be as diverse as Earth. Back to races, though-- one of the races in Oubliette are the Demi, who are...small. They have other biological tendencies-- more emphasis on cultural roles, a certain alien mind-set. In game terms, they get less Attributes & more Skills & a Derangement that gives them back Willpower if they indulge it. In fact, Demi isn't a "race," but a species. That is an important difference. Now with the Demi as my "hardware," I can run other fantasy tropes on them as "software." A subterranean tribe of Demi who have a mental inclination toward Obsession & a cultural preference for beards? Dwarves! A hive of Demi living in advanced saucer shaped ships with a predilection towards human experimentation? Greys! Isolated island dwellers who farm bananas who live behind waterfalls & have a phobia of owls? Menehune! Monoculture can be cool-- "all the Dragonborn are the scions of their fallen Empire"-- but its proliferation is kind of goofy. You can see that fact wiggle its way into the mythology of Dungeons & Dragons-- heck, in 4e you've got Elves (Wood Elves), Eladrin (High Elves) & Drow (Dark Elves). Those don't all have to be races, they could just as easily be cultures. Some systems or settings make it a feature of Humans-- Elves & Dwarves are all alike, but Humans are diverse, Humans have cultures. That is one way to handle it, but I think the best way is to have your "races" be "species," & then have cultures for them...exist. It adds verisimilitude, if you ask me.
Collapse