A Kingdom Strange: The Brief and Tragic History of the Lost Colony of Roanoke by James Horn.

Reading this made me think of a couple of things. First, I was glad that it was a dry enough text not to give in to the faux-mystery of Roanoke. Don't get me wrong-- I heart the "mystery" of Roanoke & Croatoan, I like it so so much, but it is myth, it is a fable. It is pretty clear that the missing colonists merged with the Croatoan indians-- the word "Croatoan" isn't mysterious at all, just the name of a tribe. The signs point that way, historical hear-say points that way, the grey eyes of the indigenous people point that way, & if memory serves even modern gene mapping supports it. The text isn't amazing-- it is almost an elaborate chronology-- but the maps are there to drool over. I did like Horn's use of jargon-- the discussion of ship guns was particularly fulfilling (50). The other thing that was killing me was the urge to yell at the historical people. At one point Sir Walter Cope says that Virginia was more like "the Land of Canaan than the land of Ophir" (205). Right, guys, it is a fertile land, quit getting obsessed looking for gold & look around you! Talk about missing the forest for the trees. I just wanted to shake Ralegh for his stupid obsession with El Dorado (195). You don't need to find a gold mine, man. Also, of course, talking about Roanoke & Croatoan always makes me think of the book me & the Kit Marlowe & Co. crew wrote, Therefore A Cruel Messenger.

Foremost, it made me think about

martak's manuscript, Cardenio. Sir Walter Raleigh features as a character in Mike's book, & beyond that, in Mike's last Oisos game there were a number of fantasy stand-ins for the 1600s. Queen Gloriana, Sir Francis Dracul, Wolfingham, &...Sir Walter Ry'leh. Truly one of the greatest puns of all time. Now, in the game, Mike was considering creating a race of frog-people called the Croatoan that lived in the New World, & Bernie & I were off-put by it. There is a longstanding colonial legacy in Dungeons & Dragons. Its history is basically one in which white people-- white humans, white elves, white dwarves-- bust into the homes of dark people-- green trolls, yellow goblins, grey orcs-- & then kill them & take their stuff. Making the inhabitants of the New World inhuman is just a symptom of the Othering that lurks in the genre, & that isn't even talking about how often that Othering is done with a -2 to Int & a +2 to Wis. Bernie, Mike & I talked about that, & that conversation was haunting me as I read along. I tried to piece together alternate scenarios. A New World campaign where the English are Orcs, Native Americans are Humans, & the people of Croatoan are Half-Orcs? Okay, so then the French are Dwarves, the Spanish are Half-Elves, Africans are Elves? Except now I've subdivided Europe into three races but made Africa & America one race. Maybe African can be split between Drow, Elves, & Eladrin? Then the Americas can have Humans, Kalashtar, I don't know. See. Troubling. & using fantasy races to stand in for "race" is fundamentally problematic! Anyhow, I like the idea of Croatoan, is my point. 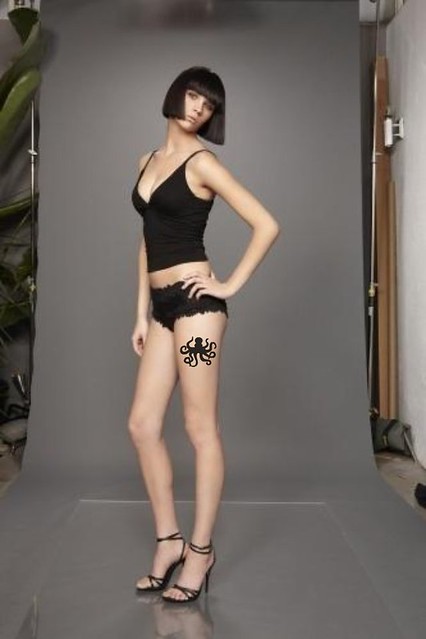 Guess who got a Louise Brooks haircut & just moved up for "favorites" status? Brittani, that is who! We are an episode behind; I said two weeks ago that I wouldn't really bother learning anybody's name till the make-overs, since it was impossible to pick favorites, & lo & behold, here we are. Brittani, not only are you my favorite, but I also find you attractive; a strange mix, since I don't require a model to be attractive, you know? Just good at modeling. I hope she can stay the course. Hannah is kind of the worst, but in a delicious way; that is

comeuppances likes Molly. I don't know who is

elladorian's favorite. I also like Sara, because one, she called herself "dirty Smeagol" when she was feeling sad, & because (as Jenny pointed out) she looks a little bit like Jenny & Cortney had a baby. Fair enough! Anyhow, because we were drinking this barleywine that Lilly brought-- I can't recall the name, but it had pigs on it-- it took us a solid two hours to watch that hour of television. Also, because we're a bunch of nutbars. Archie was there, & he was really humpy-- which is weird, because he never has been before. Anyhow, we're still a week behind, so no spoilers. The evening ended with Lilly using apps on her phone to mess with photos of us. I hated the fat one so much, & the old one is pretty terrible too. After everyone left, there was still one more bubble of trouble, as Lilly forgot her glasses & had to come back to pick them all. All's well that ends well, though. I slept like rubbish, by the way-- I woke up for an hour at three o' clock because my stomach was in open revolt. 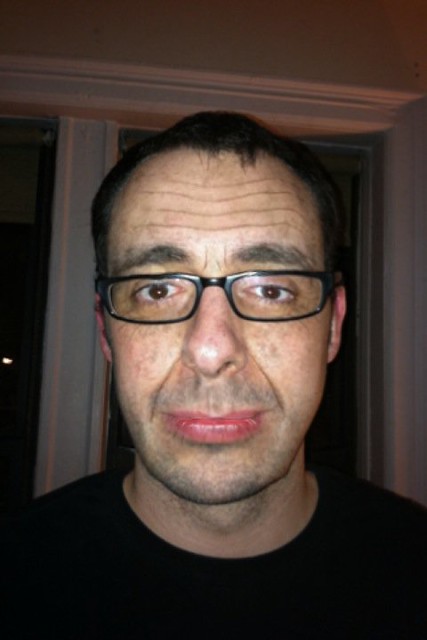