I have been continuing to think about roleplaying stuff, so I figured I'd spool out my train of thought to keep up with what I've been mulling over. I continue to really like the idea of Character Traits, & they will definitely be appearing in some form or another in the next campaign I run. That being said, the major problem I've identified is that you lose a degree of the "neat rule hacks," which is a shame. I am a big proponent of the idea that the rules can help you tell the story; at the very most basic level there is the fact that attributes & skills help describe a character's strengths & weaknesses, right? & different mechanics twists can help distinguish races or classes from one another. A game with lots of hit points tells a more swashbuckling story than a game with more limited health options, which tends to be more "gritty." It is a language of subtext, & that can be exploited by the system & the Narrator to good effect. Conversely, relatively minor tweaks, especially conditional ones, really bug me. Give me minor constant hacks or major conditional ones.

I still don't have an easy answer for what to do, here. I really do think it is important. By way of example-- making antagonists in Oubliette is easy. All I have to come up with is an "Attack" value, a "Defense" value, & a "Health" value. Theoretically these should be derived from the creature's statitics, but why bother? Just eyeball it, since only the output matters. This template has one problem-- it is boring. So I spice it up a little. The Sugarcane Slasher was able to pull the PCs a number of squares equal to the number of successes it rolled on attack, trading damage for distance one to one. The Demi of the Terror Wolf Mob gave their targets a minus one penalty every time they hit them with their "neural whips." When the Players fought the mime-assassins of the Vanitas Vichey, those guys rolled a d10 every hit & dealt a random point of Attribute damage-- 0 being Narrator's choice. So on & so forth. Those little pinpricks, those dashes of colour, help make things interesting, & I'd hate to remove them from the table, as far as Characters go. In fact, the strength of the current Merit system is the use of ad hoc rules-- if there is a Player who wants to disarm people, the onus should be on him. It is an elegant dodge of the horrors of, for instance, Dungeons & Dragons' grapple mechanics.

So what are the important rules? Well, there are the very broad ones. 9-again rolls & 8-again rolls, those are both vivid, flavorful, & Players remember them. Auto-successes are also good-- I've used 9-again & auto-successes with items & I have had very positive results. Rote actions & advanced actions both give you re-rolls, & thus are much heftier, right? So I'm not sure where they fit in. I can even come up with some other neat fundamental mechanics-- 7-success, where rolls of a seven or better are successes, rather than the typical eight or better? Boom, there you go. I've had a few ideas-- maybe items shouldn't grant extra dice, maybe they should all be 9- or 8-again? Nah, if I'm going to do that I should just have variable difficulties, which isn't the worst idea, but a different discussion entirely. I could just have a "Hacks" section of the character sheet, or little boxes next to each skill, but then how much XP does a 9-again cost? & those are just baseline mechanics fiddling-- as I described above with the various monsters & villains, more specific rules mini-games are also a lot of fun. At some point this over-laps with Powers-- things like Disciplines & Gifts-- which is something else to keep in mind. Hrmph.

On the subject of the fact that there aren't any Traits derived from Presence, Manipulation & Intelligence, I have had a few ideas. First-- what if Willpower was derived from either Resolve plus Composure or Presence plus Intelligence? Or, well-- I understand the logic behind Resolve plus Composure, but I think Presence is a potential source as well, right? Self-confidence lending itself to Willpower. Anyhow, I like Willpower, & I might be alright with giving characters a higher over-all Willpower, right? Something to think about, anyway. I really like Defense, which is calculated by the lower of your Dexterity or your Wits. It makes players make hard choices, which I find to be the sign of a rewarding mechanic. Plus-- & this goes to the ability of rules to tell stories & to the idea of special rules hacks as Powers-- you can flip it so that a character or race or whatever has the higher of Wits or Dexterity, & boom. Isn't that interesting? I think so, anyhow. I've discounted the idea of a "Wyrd" or "Glamour" pool-- too much complexity for too little gain, especially since Willpower already exists & can be co-opted for the same thing. I still occasionally think of a "Resistance" Trait, like Defense for Social & Supernatural attacks-- an idea, right? Or "Aura," as a sort of default area of effect? Nah, that is too abstract. Anyhow, this is the kind of direction I'm thinking of taking it. 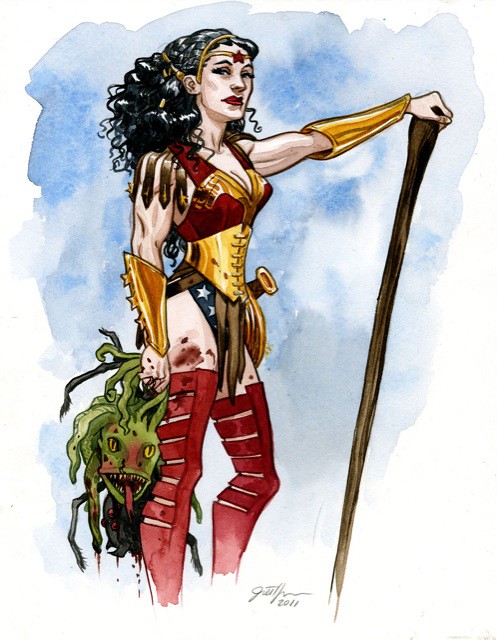 It is no secret that I think about Wonder Woman from time to time. The other day

fordmadoxfraud passed along a passel of comics, & among them were a few Wonder Woman issues. If you keep up with these things, you'll know that J. Michael Straczynski took over Wonder Woman, gave her a costume reminiscent of the 90s X-man Rogue, changed her origin story & then almost immediately dropped the title. I read a few of the Phil Hester run, who picked up the outline JMS had left, & I...like it, kind of. I think the radical design change & the retcon of her history wasn't required, but I think I get it. I've said for a while that Wonder Woman should focus on her mythological roots (by the way, how great is that Jill Thompson picture? Funny, I always picture her holding Medusa's head, too) & these stories do that. Wonder Woman breaking the horn off a centaur-like god of the hunt & using it to kill him? Right on. & I realize that the "secret hidden Amazon" thing is sort of a trope of the modern Paranormal Romance-- which I have suggested as a good direction. This is not bad stuff, here-- shame they had to turn everyone off by going about it in such a sloppy way. I like it though; I hope people pick up on the vibe & run with it, because there is potential here. I think that comic book fans have largely forgotten that the Justice League is made up of characters from radically different genres. They've all blurred together into the "superhero genre," but I think Batman's return to his noir roots is proof that you've got tons of room to stretch with the characters. Which brings me to a side note: Aquaman. I think Young Justice is using Aqualad as proof that the Atlanteans aren't dumb characters, & I've always been a fan of the MacSweeny's Aquaman rant. I still say the solution to Aquaman is to make him operate in the Lovecraftian Horror genre. You can have him go from armored fish-man, to bearded lunatic with a harpoon hand, to squidbeard deep sea hermit, & back again. It is the cycle of the SAN check! He has an okay rogue's gallery, if you say it is Black Manta & Starro, right? & then add Cthulhu? 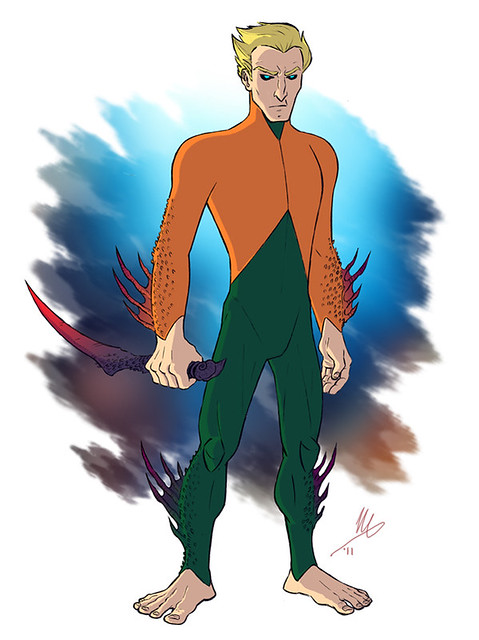 What else did I read-- well, I read twenty-five issues of Usagi Yojimbo, which were of course amazing. What can you say about that stuff? Everyone acknowledges how wonderful it is, right? I read a Hellblazer issue, which-- just seems like it is wandering. A Spider-Girl-- I wish she had powers! Still, as Robert Muldoon would say, "clever girl." Heroes for Hire has Ghost Rider shouting about the guns from hell firing "damnunition," which-- okay, awesome. Abnett & Lanning, you guys are a-okay. Power Girl is about everyone trying to figure out that Max Lord exists; only Power Girl can remember, but also Batman & Dick Grayson's forensic skills can help them dig up the memories. The New Avengers is just Luke Cage & Jessica Jones arguing about what her superhero name should be, which is okay with me. I kind of wish we could just have the two of them, you know? Luke Cage is the premier superhero of the Marvel Universe these days, right? Or am I wrong about that? Oh, & I read 4...or is it 3? The Death of Johnny Storm. I don't know why people liked it? Is it because there were equally plausible ways for other characters to die? I would have liked it better if there were four plots running through it-- it had Galactus, Namor, & Annihilus, but no Doom? Anyhow, vanishing into a horde of enemies is hardly a comic book "death," right? I also read The Uncanny X-Men, which is an Emma Frost story, & six issues of Black Widow. It reminded me of one of my comic pitches, my dream team of White Queen, Black Widow!. Anyhow, Marjorie Lie & Daniel Acuña were doing awesome on Black Widow but Swierczynski, Ruggiero, Garcia & Charalampidis were good, too.
Collapse